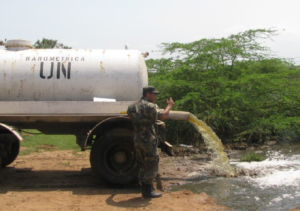 Protesters who hold Nepalese U.N. peacekeepers responsible for a deadly outbreak of cholera that has killed almost 1,000 in three weeks threw stones and threatened to set fire to a base in the country’s second-largest city Monday, Haitian radio and eyewitnesses reported.

Media representatives photographed a SANCO truck dumping feces from the Nepalese MINUSTAH base at Mirebalaise into the Artibonite River system.  CDC tests show the  Cholera strain is the same found in Nepal.