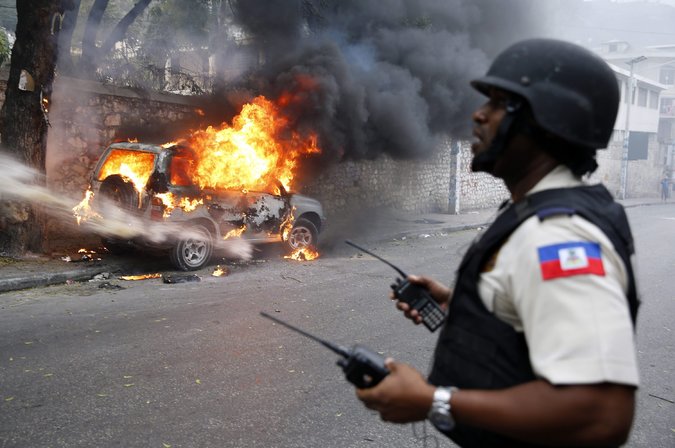 PORT-AU-PRINCE, Haiti — Volcy Assad, a Haitian political activist, stood before an enormous plume of black smoke emanating from a pile of burning tires and made it clear that the demands of protesters had changed.

“Today we are demanding the departure of Michel Martelly,” Mr. Assad said on Saturday, referring to the Haitian president. Around him, groups of young men, faces covered with T-shirts and bandannas to shield from tear gas, had blocked the streets with rocks.

One day earlier, officials had bowed to widespread civil unrest and postponed a single-candidate presidential runoff vote that was to be held on Sunday. Now, feeling emboldened in their objections to the first round of voting that many saw as deeply fraudulent, protesters are demanding the ouster of President Martelly. With just two weeks left in office, he has become the central figure in a growing political scandal here that threatens the stability of a nation with a long history of social unrest and turmoil.

Mr. Martelly’s supporters took to the streets on Sunday in counterprotests and vowed to keep him in office, a situation of competing rallies that experts feared would lead to violence. In Port-au-Prince this weekend, protesters burned cars and barricaded streets as the police responded with water cannons and tear gas.

Thousands of people marched in the streets of Port-au-Prince, the capital of Haiti, against the government of President Michel Martelly, with some clashing with the police.

By THE ASSOCIATED PRESS on Publish Date January 25, 2016. Photo by Andres Martinez Casares/Reuters.
In a situation several experts described as “fluid,” it was increasingly unclear whether Mr. Martelly would remain in office until Feb. 7, when his mandate is scheduled to end. “They intend to push the insurrection to force the president to leave before Feb. 7,” said Annibal Coffy, a lawyer who has served as a consultant to the Haitian Senate. “I think there is no way the country will survive a week of violent manifestations.”

The October presidential race, in which 54 candidates competed, was mired in fraud, according to opposition leaders and human rights groups. Because no candidate won a majority, a runoff was scheduled for Sunday, but protesters who expected a rigged outcome blocked streets and burned voting centers, leading to the postponement.

The United States State Department, which has been criticized for supporting the disputed election, issued a statement on Sunday condemning the protests.

“The United States is taking great interest in how elections in Haiti are unfolding,” Mark Toner, a deputy spokesman, said in a statement, “and expects that persons responsible for organizing, financing or participating in electoral intimidation and violence will be held accountable in accordance with Haitian law.”

On Election Day in October, the elections board distributed special passes to 900,000 observers from all political parties, who were allowed to vote outside their home precincts. Human rights groups said party loyalists used the accreditations to cast multiple ballots.

Mr. Martelly’s handpicked successor, a banana exporter named Jovenel Moïse, came in first with 33 percent of the vote. Mr. Moïse is a virtual unknown, and many members of the opposition believed that the vote had been rigged on his behalf. The government denied the accusations. The United States and international observer groups said quick counts showed that the results of the race were accurate, despite the irregularities.

Jude Célestin, a former government construction official who came in second, boycotted the runoff and refused to campaign. Civic, business and religious leaders argued that a one-candidate runoff should not take place, but Mr. Martelly failed to recognize the growing discontent among the populace. As recently as Thursday, he gave a combative radio address insisting that the vote would go forward, which further infuriated opposition groups. The vote was canceled hours later, but the protests continued. Mr. Martelly’s spokesman did not respond to requests for comment on Sunday.

Mr. Martelly, a former Carnival singer known as Sweet Micky, is blamed for the electoral crisis because he failed to hold elections during his five years in office. The terms of every elected official in the country eventually expired, leaving Mr. Martelly to rule by decree for an entire year.

He was also criticized for efforts to change municipal boundaries in an area where he owns property and for creating a police brigade accused of repressive tactics. “The Martelly regime hasn’t brought anything for the population,” said Yves Jean Joseph, 34, an unemployed protester. “He had four years to hold elections, and instead he destroyed the Parliament. What we had were not elections. It was ballot stuffing.”

Politicians spent the weekend in back-room negotiations to determine who would lead a transitional government after Mr. Martelly’s term ends. People close to the negotiations said the president wanted to extend his term until a new election was held.

Guy Philippe, a Senate candidate whose runoff was also delayed, called for an uprising if the president were forced out.

“I am ready and we are ready to defend the democracy, no transition,” he said. “The president will stay and continue his mandate as requested by the law.”

Mr. Philippe, a fugitive wanted by the United States Drug Enforcement Administration, was among the leaders of a 2004 coup that led to the ouster of President Jean-Bertrand Aristide.

Correction: January 25, 2016
Because of an editing error, an earlier version of this article misstated the day of the planned runoff election, which was postponed. It was Sunday, not Friday.

What the world does not see is a contrast between the opposition, backing the candidate Celstin, and those backing the leading candidate Jovenel Moise.

The opposition is burning, stealing and killing, while Jovenel Moise supporters are carrying out peaceful demonstrations, in support of their candidate.

There are no burning cars, no broken windshields, no pillaged stores, no market lady’s having their stuff stolen.

Celestin had no chance in a run-off, so his supporters decided to derail Democracy. 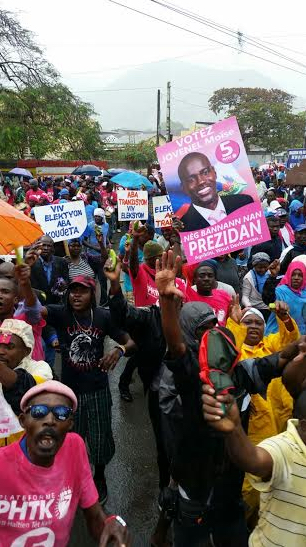