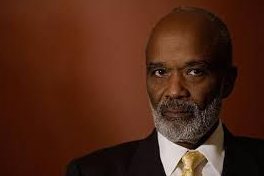 Agatha Christie could have titled  it “Murder on Kenscoff Road,” “The Clairin Caper,” or “A Toast to Death,”  or,   had Preval still been President, “Poison in the Palace,”…

No matter what the title might be, Rene Preval was removed from the game by poison in a bottle of clairin, if the foreign pathologist, specializing in poisons, is to be believed.

On the day of the crime, Preval was involved in a series of meetings aimed at taking over should the Jovenel Moise government collapse. A major focus was on the revival of INITE as a major force to fill the vacuum.

It would seem that several bottles of Clairin had been situated in front of Preval, confirmed by cellphone pictures from the moment. One of these was missing after the crime.

An American investigator, with year’s of experience discussed the situation, using the standard MOM formula-

This sees a simple formula applied to the investigation and, as a matter of custom, the first focus is upon the husband/wife of the victim, followed by immediate family members and business associates.

During the Watergate Scandal in Washington, in President Nixon’s time, the key  was “Follow the Money.” In Preval’s murder one of the MOTIVES must be money. Watch to see who gains control of his fortune of nearly $500,000,000 American.

American intelligence groups have watched the various bank accounts, associated with the Aristide and Preval presidencies. They are watching this ongoing game very closely,  but we will   never know their conclusions, unless it suits the Trump team.

From the outset, Preval’s sister and daughter have told their friends   there is no suspicion of a Michel Martelly or Jovenel Moise involvement. They are not so charitable to others who would fall within the MOM concept.

More probable, Time will not tell and this murder, like many others, will slip quietly into history.

However, we believe this crime is one of those that will be discussed and ignored by the Haitian legal infrastructure. Like their direct involvement, in many murders, and other crimes, such as major cocaine trafficking into the States, Preval and Aristide lived their lives free of real legal threats, domestic or foreign.

Mireille Durocher-Bertin, and Jacques Dominique were murdered in crimes that carried the fingerprints of both Aristide and Preval but they will never see an actual trial aimed at conviction.

So it will be, with the murder of Rene Preval.  Foreign intelligence analysts, applying the MOM Formula,  come up with Jean Bertrand Aristide and one other, as their best bets for the Intellectual Author of the crime.

Our money (bet) is on Aristide, the spider lurking in his Tabarre Web.

1 thought on “PREVAL WAS POISONED”