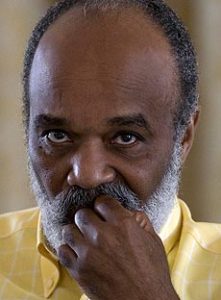 BELLERIVE A DOMINCAN…NEPTUNE AN AMERICAN CITIZEN….. AS IS CLAUDETTE WERLEIGH, ARISTIDE’S FIRST MINISTER!!!!  LET’S CUT THE CRAP ABOUT DUAL CITIZENSHIP UNLESS EVERYONE IS TREATED EQUALLY…BETTER TO HAVE DUAL CITIZENSHIP THAN SEEKING PARLIAMENTARY IMMUNITY TO AVOID CRIMINAL CHARGES OF MURDER, DRUG RUNNING, KIDNAP, EMBEZZLEMENT AND MURDER LIKE BELIZAIRE AND MOISE JEAN-CHARLES!!!

June 16, 2013
Even as the Preval team was looking to dump Pierre-Louis, as Prime Minister, replacing her with the Dominican citizen, and member of the DR’s intelligence service, Max Bellerive, there was a discussion of whether or not Paul Denis could become Minister of Justice.
This meeting was held in Paul Denis’ house at 8 Rue du Chile and was attended by many Lavalas leaders. Chrystaline was about to become Minister of Social Affairs and was hinted as Aristide’s choice for the presidency.
Some suggested Paul Denis couldn’t be minister of Justice, because he was a citizen of Belgium.  Denis replied…”If you only see mine I will publish my list, The head of our power has citizenship of Belgium.” And, turning to Senator Lambert, who did not want to support him as Justice Minister,  Denis continued, “You also have a dossier.Recall when we (the Senate)  forgave you and your bateau with 750 kilos off Tiburon..”
This was an occasion when a boat, owned by Senator Lambert, was intercepted off Tiburon with 750 kilos of cocaine on board. 14 of his friends were arrested.  The Senate held a trial and absolved Senator Lambert of his involvement..
Deputie Abel Decoline was against the Denis appointment.  And Tolbert said, “Decoline, I know you are French. I was in France with you, you have double nationality…I will take steps to put you out..”
Preval put together a committee to study the problems of dual nationality, but this never went anywhere. He probably couldn’t find enough people, in his circle, without dual nationality, to serve on the commission.
The question now becomes apparent!
Are there any real Haitians in the Lavalas leadership, or do they all hold secret dual nationality.
Time for everyone to take a polygraph with a simple Yes of No question.
Do you have dual nationality?
Better yet, let’s stop wasting valuable time and focus upon the Nations problems

7 thoughts on “PREVAL, PAUL DENIS AND BEN-AIME CITIZENS OF BELGIUM…CONFIRMED!!”