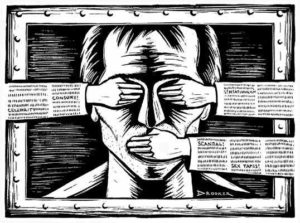 PETIT-GOAVE, Haiti – The Haitian organization defending the rights of journalists, SOS Journalists, on Monday condemned the arrest and illegal detention of two journalists working for Radio Prevention of Petit-Goave, on the orders of the Government Commissioner at the court of first instance of the city of Faustin Soulouque, Mr. Alix Civil.

The radio transmitter and other equipment were also confiscated and transported to an unknown location.

Indeed, journalists Ernst Joseph (CEO of Radio Prevention) and Wolf ‘Duralph’ François (presenter of a program in prime time) were arrested and detained on the orders of the chief prosecutor of the city, Mr. Alix Civil, defamation, disturbing public order and breach of public goods.

SOS Journalists called the arrest of two colleagues on Wednesday, June 22 by the Commissioner Alix Civil, arbitrary and that the organization for the freedom of the press has denounced Civil, as an enemy of press freedom.

The Secretary General of SOS Journalists, Joseph Guyler C. Delva, visited on Saturday and Sunday at Petit-Goave to investigate the matter.

The Day of the Arrest

The two journalists were summoned by the prosecutor of Petit-Goave to address issues related to published information, opinions and comments made during their various shows on Radio Prevention, considered the most popular radio in the area.

While the two brothers were in the office of the Government Commissioner, clashes took place between the mob and police, supported by MINUSTAH.

Stone-throwing on the part of the population, shots in the air, on the part of police and UN workers were recorded. Windows were broken and some people were victims of injuries in these clashes.

According to what reported the secretary general of SOS Journalists, Joseph Guyler C. Delva, Government Commissioner Alix Civil considered that the journalists, who nevertheless were peacefully sitting in his office on his own invitation, were responsible for misconduct by some members of the crowd.

“I insisted on asking the Commissioner Alix Civil what he accused the fellow in terms of crime, to them personally accountable, the commissioner said, even if they had not personally committed the offenses, but the crowd made up of several thousand people, was under their control, “reported Guyler C. Delva.

“The commissioner Civil decided to arrest journalists in the place of those on the outside throwing stones in their clashes with the police throwing batons and gunfire to disperse the crowd. This is an aberration!” said Guyler C. Delva, recalling that criminal liability is personal.

“Journalists at no time was the head of a violent mob or in the process to encourage or instruct anyone to commit acts of violence. Moreover, they were inside the commissioner’s office of the government “, said the secretary general of SOS Journalists.

Other Motives Under Speculation

According to various sources, some political and judicial authorities that the commissioner Alix Civil and the mayor of Petit-Goave, Roland Justal, always expressed in some quarters their aversion to Radio Prevention and its leading journalists, Ernst Joseph and Wolf François, because emissions of a political, humorous and satirical they are regularly broadcast on the radio.

“If there have been disturbing the peace outside the public prosecutor, it was for the police and UN workers on the scene to arrest the troublemakers, they are responsible for maintaining order, “said Mr. Delva who did not understand why journalists have been arrested while none of the alleged rioters were arrested.

“I think the commissioner Civil, predator of press it is, will stop much of journalists. We will organize a caravan of journalists from other parts of the country to make us in his office in Petit-Goave and I think we should stop all, starting with myself,” firmly declared Guyler C. Delva.