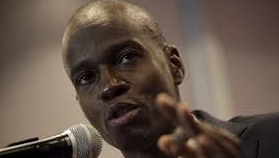 Sunday, President Jovenel Moïse left the country to New York to take part in the debate of the 72nd Ordinary Session of the General Assembly of the United Nations, which will be held from 18 to 26 September 2017.

On the sidelines of the general debate, the Head of State will meet with Antonio Gutteres, the UN Secretary-General, Luis Alberto Moreno, President of the Inter-American Development Bank (IDB) and Christine Lagarde, Director General of the International Monetary Fund (IMF), among others, to discuss the economic and social development priorities of his administration.

He will also take advantage of his stay in the United States to speak with compatriots of the Haitian community in the metropolitan area of New York.

To this end, the Consulate General of the Republic of Haiti in New York invites the Haitian community to a meeting with President Jovenel Moïse on Thursday 21 September 2017 from 7:00 to 9:00 p.m. at Medgar Evers College located 1650 Bedford Ave, Brooklyn, NY 11225.

The Head of State will return to Haiti on Friday, 22 September.