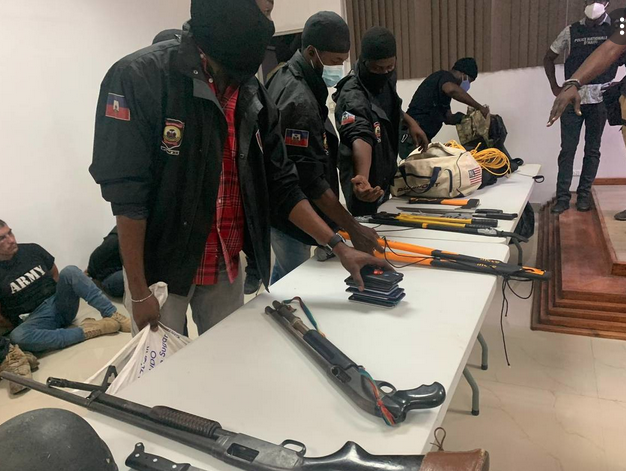 Four days before the assassination of Haiti’s president plunged the impoverished nation into chaos, Dr. Christian Sanon made a frantic call to a trusted friend back in Florida. He relayed that he’d been abruptly abandoned by the Colombian bodyguards hired to protect him in the land he hoped one day to lead.

“Saturday night before the Wednesday night [assassination] he calls me and says ‘Steve, my guards asked me for money. I didn’t have any.’ They said ‘if you don’t have money you can pray to God.’ They left him alone,” said the man, a confidante of Sanon, the South Florida doctor Haitian authorities are calling an intellectual author of the July 7 murder of President Jovenel Moïse.

The next time and last time the confidante heard Sanon’s voice, he said, was hours after the assassination of Moïse in the overnight hours at his home in the hills above the Haitian capital of Port-au-Prince.

“What happened between that Saturday night and that Wednesday? Who diverted them from their mission of securing the hopefully next evangelical president, to going to this guy’s [expletive] house? I mean are you kidding?” Steve told the Miami Herald exclusively, clearly overwhelmed by events that have followed.

\Steve is not his real name. The Miami Herald is using a pseudonym to protect his identity, in part because he fears for his safety and that of Sanon, who is in custody in Haiti. Steve said he has provided testimony and potential evidence to the FBI and Homeland Security Investigations, shorthanded as HSI.

“His guards left. Where did they go? I’ve talked to the FBI and HSI, and nobody seems to know the answer,” said Steve, who was present in a May 12 meeting in Fort Lauderdale when 10 people gathered to discuss a plan to save Haiti that they hoped would end with Sanon as president-by-decree.

The revelations from Steve are important because they reflect a previously unreported evangelical focus to the confusing events in Haiti. And they refocus attention on the Colombian commandos who were ostensibly hired to protect Sanon, who dreamed of leading a three-year transitional government of his native Haiti.

The role of the Colombians is an unfolding subplot in the Haitian assassination. At least 18 Colombians were captured and three others killed. Colombia has been searching for three other nationals suspected of having met with Sanon. Haitian authorities have said five Colombians remain at large, adding that 26 in all were involved in the plot.

Colombian President Iván Duque on Thursday confirmed that a small group of Colombians appeared to have had advanced knowledge that their mission was not security but an assassination.

Sanon’s confidante and a Haitian-American professor in South Florida both acknowledge they were aware of his political aspirations to lead Haiti. But both stressed he never sought to gain power through violence but rather through the help of God.

A pastor, Sanon believed that his efforts would be blessed by a popular uprising of evangelical Christians. In Haiti, evangelicals had been leading mass protests demanding the ouster of Moïse.

In fact, Sanon and his followers in Haiti and Florida sent around a decree two months before the assassination in an attempt to convince the U.S. State Department and members of the congressional Black Caucus to recognize Sanon as an interim leader of Haiti, where the president had effectively shut down his legislature.

Their letter to the State Department — addressed to Julie Chung, Acting Assistant Secretary in the Bureau of Western Hemisphere Affairs — was signed by nearly 100 individuals and organizations, some of whom are from Canada.

State Department officials told the Herald and the McClatchy Washington Bureau that claims the department engaged with the decree’s authors regarding their plans, or offered support, are false.

“We, together with Dr. Sanon, have already selected ‘who’ would be interim acting ministers etc. of this transitional government. This interim government has been well thought-out, well planned and is ready for implementation to lead the people of Haiti out of the current paralysis and back to democracy,” the letter said.

In Haiti, at least one person who met with Sanon said he presented himself as having powerful U.S. relations and backing to replace Moïse.

“I took him for a bluffer,” said opposition leader Paul Denis, who said Sanon came up and introduced himself after a meeting with several pastors. Denis said the two never had any relationship, and he didn’t take Sanon seriously.

Mid-May proved a pivotal period. On May 12, Sanon had gathered with nine other people in a Fort Lauderdale conference room to discuss plans to step up pressure on the Haitian government and begin thinking through an economic redevelopment plan for the country drafted by a retired Haitian American economics professor in Broward County named Parnell Duverger.

In a lengthy interview, Duverger said he first met Sanon, now 63, in 2016 after a political event for Haitians who backed then-candidate Donald J. Trump. Over pizza, Duverger discussed with him a plan he was drafting that would allow Haiti to turn garbage into fuel and other ideas to make the corruption-riven country a functional free-market economy.

The two men struck up a friendship, further cemented when Duverger gave Sanon tickets to a Trump rally in Orlando.

“He said I was sent by God,” said Duverger, 70, adding that the two Haitian Americans felt a calling to help their motherland. “As a Haitian, I not only have the right but the duty to help my country get out of … being the poorest country in the hemisphere and the third poorest in the world.”

Duverger called the killing of the president an abomination. He stressed he only knew Sanon at the May 12 meeting and not any of the others in attendance. But in the same breath, he didn’t hide his disdain for his country’s rulers.

“What you have there now is a bunch of racketeers and criminals. You have to call them that,” Duverger, a former government functionary, said.

Duverger said he briefly worked as an economic adviser to the Haitian government after a bloody coup in 2004 ousted President Jean-Bertrand Aristide, who was flown by the United States to exile abroad.

The joint interest in developing Haiti led to weekly Zoom calls between like-minded people in Haiti and Florida, looking to develop a faith-based and community-based organization that could lead to an evangelist in power in Haiti. On these calls at times were Haitian diplomats, including one with a U.N. portfolio.

As first reported by the Washington Post on Thursday night, a meeting was held on May 12 in South Florida, where many of those now detained in Haiti or sought as persons of interest were present to ostensibly discuss the future of Haiti. These included Antonio “Tony” Intriago, president of CTU Security, the firm that police in Haiti and Colombia say hired the Colombian commandos.

Haitian police said it was a key gathering at which the plot to kill the president was hatched.

What the Colombians were hired for remains in dispute, with some of the ex-soldiers saying they were in Haiti to protect VIPs while Colombia’s president said a small number knew all along it was an assassination being planned.

During that meeting, said Steve, Intriago made a presentation alongside a Colombian named Gabriel, who went by the nickname “the colonel.” In Haiti, a source who debriefed several of the 18 Colombians and two Haitian Americans arrested soon after the assassination said Gabriel referred to a man named Gabriel Perez. Gabriel, the source said, worked for CTU and served as the interlocutor between the hired Colombian security contractors and Intriago. Steve said Gabriel put his phone on speaker while someone on the other end described efforts as to have been supported by the State Department and Justice Department.

“I was in the room when they said, ‘We know where the bank accounts are, we’ve talked to bankers, we’re ready to seize the money,’” Steve said of the alleged pitch by Intriago and Gabriel to go after drug traffickers plaguing Haiti as part of the nation’s new dawn.

Also making a video and powerpoint presentation at the May 12 meeting was Walter Veintemilla, a Miramar-based mortgage lender who was described by his lawyer as an infrastructure financier. His companies registered with the Florida Division of Corporations don’t fit that description. Mostly they are companies that broker loans or insurance, and he also has one listed that is engaged in foreign-exchange trading.

“He said he has connections with the World Bank, he said he was a consortium of different companies. I don’t think he had a [expletive] penny invested in this deal,” said Steve, who was present during Veintemilla’s presentation. “He’s not the money man.”

Robert N. Nicholson, a former assistant U.S. attorney for South Florida, issued a statement Thursday night on behalf of Veintemilla confirming that one of his firms, Worldwide Capital Lending Group, “assisted in providing a loan to CTU” Security.

That stops short of saying Veintemilla, an Ecuadorian émigré, actually lent money to the operation. Nicholson asked for questions in writing but did not respond to a list of 10 detailed questions about Veintemilla’s relationship to CTU, Intriago and Sanon.

Duverger, who Sanon had asked to become his economic adviser soon after meeting him, said that he began participating in the Zoom meetings in 2020 with Sanon with other influential Haitians that at times included government officials to discuss the country’s problems and ways to solve them

“Half of those participating were Haitians living and working in Haiti, some of which were government employees. We counted with a gentleman that was part of the diplomatic corps in Haiti working at the United Nations, and another that was working in another country. They were good-caliber professionals,” he said.

The weekly meetings, organized by Sanon, usually lasted about two hours and kept a strict agenda and mainly focused on economic, social and development issues, he added. Those participating loosely called themselves “the Strategy Group.”

But even while wanting to play a key role in helping his country pull out of poverty, Duverger said he was not interested in playing a political role in the country, something that he was asked to do when he was Haiti’s economic adviser.

“I was asked to serve as the country’s finance minister but turned the job down. I said then that I did not want to have this kind of job in a country where politics are so brutal,” he explained in the interview.

Haitian police said Thursday that a fifth high-ranking member of the president’s security team has been relieved of administrative duties and taken into custody. Sanctions have also been brought against 24 security agents, though interim Police Chief Léon Charles Thursday declined to say how many were on duty the night the president was killed and his wife Martine Moïse was wounded.

As of Friday morning, close to two dozen people, most of them Colombian, had been arrested in connection with the slaying.

Charles said 24 of the police officers assigned to the president’s security detail have been summoned by internal affairs for questioning, “and 24 of them have been sanctioned for now.” Charles declined to say how many of the 24 were actually on duty at the time of the president’s death.