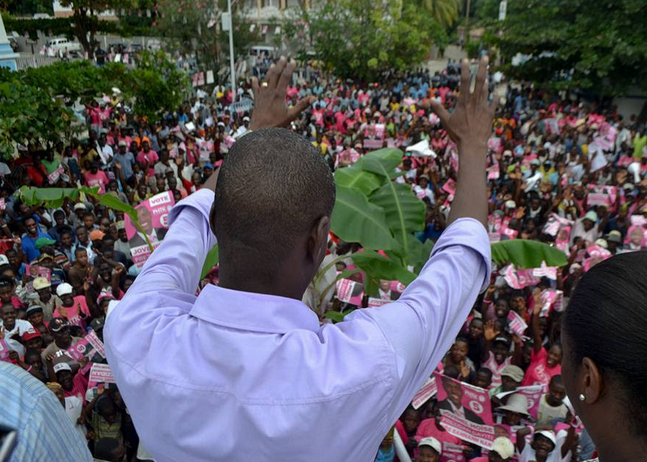 Haiti Libre:Saturday thousands of people marched peacefully through the streets of Port-au-Prince at the joint call of the “Party Haitian Tèt Kale” (PHTK) and several organizations and grouping of society in favor of democracy. Several violent incidents have been reported, including the assassination of a demonstrator, arrests and police violence.

In a press note, the Executive Board of the Platform PHTK denounces acts of manipulation, infiltration and violence whose supporters, activists and others were victims on May 14.

Press Note :
“The Executive Board of the Platform PHTK (Haitian Tèt Kale Party) spoke loudly denouncing with all its forces, the act of manipulation and violence that supporters, activists and others have suffered May 14 in the framework of the peaceful demonstration in which they participated, asking the rapid organization of the second round of elections and denounce the citizen dishonesty who is leading the country.

The PHTK condemns the assassination of Jeff Pierre-Louis, one of the protesters, and the macabre strategy of infiltration that the de facto power has put in place at the National Palace on May 13 in the idea of creating confusion in this event, that several organizations and grouping of society had organized in favor of democracy.

The de facto President Jocelerme Privert begins to settle in the country a climate of terror and political percussion, while politicizing the police. In the framework of this demonstration , the police arrested at least five militants and hit both women and men.

On the other hand, hundreds of supporters and sympathizers of PHTK in the area of O Twou (Northeast), were forced to sleep outside their homes because of political percussions they undergo. We quote a few names for example : Kenken, John, Petion, Josirus, Kerly, Daniel, Philome, Gerald, Luckner, Babi, Paloute, Rony, Elatrye…

The PHTK does not believe in violence and intimidation. This is why it condemns all acts of violence that government supporters have planned and executed in the demonstration on May 14 It is in solidarity with all the victims and their families and calls the police and judiciary to assume their responsibilities.