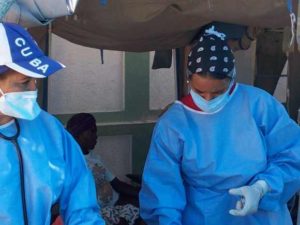 The number of health professionals of the Cuban Medical Brigade in Haiti increased to 1,160 with the arrival there of 62 members of the Henry Reeve International Contingent for Emergency Situations Specialized in Disasters and Epidemics. The Medical Brigade includes 131 doctors who graduated from the Havana-based Latin American School of Medicine (ELAM) from 24 Latin American countries plus the United States and Africa, Granma newspaper reports.
As part of this last group, 13 graduates from the ELAM traveled to Haiti to join the fight against the cholera epidemic that currently affects this nation.
Until Friday, the Cuban health professionals had attended to 38,311 Haitians —including 12,366 under 15 years old— in their 50 units and center to treat cholera. Thus far, 267 patients have died for a mortality rate of 0.7%.
For the Cuban specialists, the most complex situation is in Anse du Hainault, in the department of Grande Anse, in the south of the country. 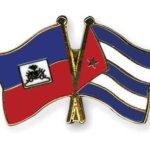 Cuba has  also trained many Haitian doctors, veterinary surgeons and agronomes. These young people serve their nation in many areas, providing service that would not be available without Castro’s help.

On at least one occasion, a Cuban graduate headed a project that was granted hundreds of thousands of our American dollars in support of an important agriculture project. In spite of the fact that he had many letters of support, written by substantial American and Haitian citizens, the American Consulate said he “was not worthy of an American visa.”

On the same day he was turned down three major drug dealers – known to the DEA – were given American visas. They then invested their drug profits in Pembroke Pines homes in South Florida.

Perhaps there is some sort of message here!!

The final chapter, of this tale, saw the young Haitian fly to Brazil where he spent American funds to buy Brazilian products.

There is another lesson here, I suppose.