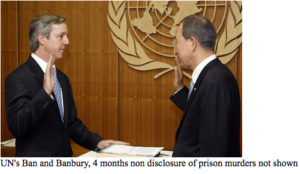 UNITED NATIONS, May 26 — Since the January earthquake in Haiti, the UN has said publicly that it is partnering with the Haitian National Police, and that it is unaware of evidence of HNP abuses of human rights including summary executions.

These statements were made by the head of the UN mission Edmund Mulet, and by deputy Tony “Rape Elates Me” Banbury, in press conferences and video links with the Press at UN Headquarters.

Now comes evidence of a slaughter of prisoners by the Haitian National Police in January, in a semi collapsed jail while UN peacekeepers stood outside. The question is, when did the UN know it, and why did the UN not come clean, but rather wait for the press to disclose it?

At the UN’s May 26 noon briefing, Inner City Press asked:

Inner City Press: In Haiti there was this incident where UN peacekeepers reportedly fired teargas and rubber bullets and then chased students into the campus of the university. What, I guess, what are the UN’s policies both on the use of these two non-lethal crowd control measures, and what training is given in terms of not violating local customs of not having armed military — armed, in this case, peacekeepers — going onto college campuses?

Spokesperson Nesirky: Well, first of all, the UN Mission in Haiti has issued an apology concerning this incident. The troops went inside the university to arrest a student who threw rocks at UN troops. But as you know, and as the Secretary-General’s Special Representative has said, UN troops should not enter university grounds. When it comes to the question of use of teargas and rubber bullets and so on, I would need to ask DPKO for more information on the rules for the use of those kinds of…

Inner City Press: [inaudible] and then on this, and I know that yesterday you made this announcement that the UN is going to conduct a joint investigation with the Government of the prison alleged killings. But what I couldn’t figure out is when did the UN know? It seems to many that this only became public because the New York Times ran an exposé of it. When did the UN become aware of it, that there was an issue of how, that some of the prisoners may have been killed by the Haitian National Police while peacekeepers were immediately outside the jail? And why didn’t the UN go public at that time?

Spokesperson: Well, certainly — a number of things. First of all, the Mission was aware immediately [that] this incident took place. That’s the first point. The second is that they immediately, the Human Rights Section in that town, in Les Cayes, immediately began looking into this. What you have to also remember is precisely when it took place, 19 January, was very close to when the earthquake took place, and therefore MINUSTAH — the Mission — and the rest of the UN presence as well as, of course, the entire population of Haiti were still digging themselves out of the rubble, metaphorically and literally. Therefore I think you could probably understand that that was the immediate first focus. This is taken extremely seriously, and there already has been an investigation within MINUSTAH into what happened in that prison. And there are already preliminary findings. And it’s precisely because there were repeated requests for an investigation by the Haitian National Police — and precisely because that investigation has not yet been forthcoming — that MINUSTAH went ahead with its own investigation and, secondly, has also now, through Mr. [Edmond] Mulet, agreed with President [René] Préval that there should be an independent commission to look into what happened.

Inner City Press [inaudible] because there have been a series of press conferences and video hook-ups with Mr. Mulet where questions of killings by the Haitian National Police have come up. And I think in one of them he said he wasn’t aware of any; then they have described the Haitian National Police as a good partner of MINUSTAH. Were any steps, again, [inaudible] I guess go back over and look at those things, it wasn’t, I mean when you say MINUSTAH was aware, was Mr. Mulet aware of this all the way back to January 19?

Spokesperson: My understanding is that the Acting Head of the Mission at that point, Mr. Mulet, was aware from early on — I don’t know precisely which day. But as I say, there were many other things that needed to be contended with at that point. And he takes it extremely seriously. And I think that it has been pursued consistently and seriously behind the scenes to try to ensure that the Haitian National Police conduct an investigation. And that did not happen, or not to the extent that was necessary, and that’s why both MINUSTAH launched its own investigation with its own resources, and has now additionally agreed with President Préval that there should be an independent commission. And the details of that are still being worked out.

INNER CITY PRESS: And just one last one on this. Were any steps taken to not have MINUSTAH work with a particular unit or units of the Haitian National Police that the UN had reason to believe were engaged in this killing of prisoners?