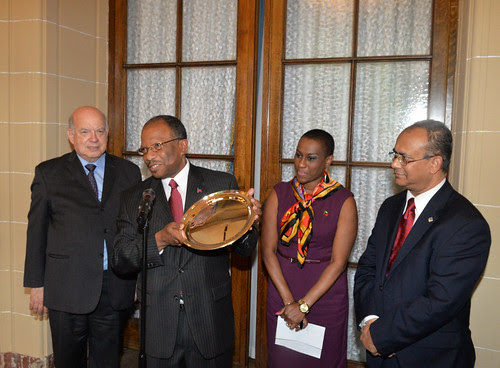 The Permanent Council of the Organization of American States (OAS) today bid farewell to the Ambassador of Haiti to the hemispheric Organization, Duly Brutus, who will leave the post after ten years to become Minister of Foreign Affairs of his country.

During his last address to the Permanent Council, Ambassador Brutus summarized what he had learned in the Organization, giving as an example what he called one of the most important lessons during his stay in the Organization: “I understood that democracy allows each country in the region to consolidate its national sovereignty.”

In his farewell words, the Permanent Representative of Haiti thanked Secretary General Insulza for the support that received when he was Chair of the Permanent Council and of the Committee on Hemispheric Security, and highlighted in particular the Strategic Vision that the Secretary General of the OAS presented to adapt the Organization to the twenty-first century.

The Haitian Minister also thanked the Assistant Secretary General of the OAS, Albert Ramdin, the member states and observer states for supporting his country. “Haiti is a country beloved within the OAS,” he said and urged member states to continue with “the great work carried out by the Organization.” Finally, he highlighted the work of the OAS in human rights, economic development and hemispheric security.

Secretary General José Miguel Insulza, meanwhile, highlighted the political career of the Haitian diplomat and congratulated him on his appointment as head of the Foreign Ministry of his country. “He has been Permanent Representative of Haiti for a long time, and he is not a man of many words , but his statements have always been very strategic,” said Insulza, who also stressed the “intelligence and courteous manner” in which the Haitian diplomat has conducted himself in the different bodies of the OAS.

The Assistant Secretary General of the OAS, Albert Ramdin, who also coordinates the Group of Friends of Haiti of the OAS, highlighted the virtues of Ambassador Brutus “as a diplomat and as a politician who defends the interests of his country.” Ramdin said “Ambassador Brutus’ knowledge about the government and the people of his country has helped all the members of the Group of Friends to deeper understanding Haiti’s political system, constitutional process, electoral system, and to understand in greater detail the events occurring in Haiti.”

After the Council meeting, in a ceremony held in the Gallery of Heroes of the Organization, the Chair of the Permanent Council presented Ambassador Brutus with a silver tray to symbolize his stay at the hemispheric Organization, while the Haitian diplomat thanked everyone for the work done while representing his country.

For more information, please visit the OAS Website at www.oas.org.