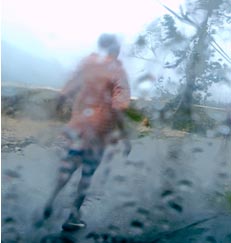 PORT-AU-PRINCE, Haiti — A hurricane season predicted to be one of the wettest on record opens Tuesday in the Caribbean, where hundreds of thousands of Haitian earthquake victims have only tarps or fraying tents to protect them in a major storm.

The Haitian government, which had five months to prepare, says it’s still working on emergency and evacuation plans. But it is unclear where people will go with many churches, schools and other potential shelters toppled by the quake.

Since the Jan. 12 earthquake killed up to 300,000 people and left more than 1.5 million homeless, there has been little progress on clearing rubble so people can return to their neighborhoods or building sturdier shelters.

Dr. Jean Pape, one of the country’s most prominent public health experts, estimates that only 1 percent of the masses stuck in dangerous flood zones have been relocated.

“There’s no give here. Time is just running out,” said Mark L. Schneider, senior vice president of the International Crisis Group. “There’s no question that large numbers, tens of thousands, are going to be in situations of misery when the rains come.”

Already, the moderate spring rains that drench Port-au-Prince almost daily leave camp residents up to their knees in putrid water.

Claudia Toussaint, a 24-year-old camped near a golf course, dug a shallow channel in the dirt under her tarp in a futile effort to keep water away from her mattress.

The problem goes beyond more misery in about 1,200 temporary camps. Vast numbers of people are exposed to disease-carrying mosquitoes. Serious flooding could cause mass casualties even with thousands of aid workers and U.N. peacekeepers present.

The U.S. National Oceanic and Atmospheric Administration has predicted as many as 23 named tropical storms, which would make this season one of the more active on record. The quake has forced Haiti to update its storm contingency plans, said Prime Minister Jean-Max Bellerive, including positioning emergency food and equipment.

A response team has been set up to deal with rain emergencies in camps.

“We don’t need a hurricane to have problems in Haiti, we just need three or four days of continuous rain to have serious problems,” he said in an interview with The Associated Press.

But Bellerive couldn’t say how the plans are being updated. And he said the country’s condition remains “fragile,” even though aid groups and government officials have said since the quake that flooding is a major looming disaster.

The Atlantic storm season always poses a risk in mountainous Haiti. Tropical Storm Jeanne killed nearly 3,000 people in 2004, and a series of 2008 storms killed 800 — mostly in the country’s central region north of Port-au-Prince.

The capital city rarely gets a direct hit; it is protected by the mountains that separate Haiti from the Dominican Republic. But even modest storms are deadly in this deforested nation where entire cities are routinely plunged under water.

The international community and private aid groups have pledged or delivered $3.1 billion to help Haiti after the earthquake and are promising nearly $10 billion more for reconstruction.

But so far, the government has relocated only about 7,000 vulnerable people to two safer camps.

The relocation is slow because the crippled government doesn’t have enough money to complete a job that includes not just setting up new tents, but providing work, schools and services.

“You can’t just move people to a new location and say ‘take care of your life.'” said Pape, director of the GHESKIO clinic.

The Salvation Army has started building two-room shelters for 600 families in the southern town of Jacmel despite bureaucratic delays in getting the material through Haiti’s ports.

The cement-secured wooden supports are designed to withstand winds of up to 30 mph, and the raised wooden floors to prevent Haitians from risking disease by using water flowing through their homes for hygiene and cooking. They expect to complete the structures within a month using Haitian labor.

Protesters have criticized President Rene Preval for a lack of progress in reconstruction. Schneider says all involved need to move faster.

Magdaline Oscar lives with her husband and 6-year-old son in a trash-strewn road that leads to the capital’s main garbage dump. She showed visitors the murky water that pools under her tent and splashes through its torn sides. During storms, they flee to a neighbor’s shelter, though many of the other tents in their encampment are also now damaged after five months of use.

“The wind and the water is destroying them,” said the 26-year-old. “I don’t think it will last much longer.”

Elsewhere, people are taking a do-it-yourself approach — adding corrugated steel and plywood to homes first constructed from a few bed sheets and plastic tarps. Leon Louis was confident about his prospects as he set up a shanty in the Champs de Mars, the capital’s central plaza.

“The rain might fall, but we’ll be in a stable place,” Louis said.

Why should we believe that the 2010 Hurricane Season will be any different from the 2008 disaster – with regard to Preval’s handling of the situation??

Prior to 2008 America’s Southern Command offered to erect a large emergency warehouse in Haiti, complete with blankets, food, medicine, vehicles, communications and other necessities. By erecting this facility, Haiti would be ready for whatever happened, able to react immediately, while waiting for foreign help to arrive. All that Preval had to do was provide a piece of land upon which to build the facility.

He never did this.

Other Caribbean nations took advantage of the American offer, but Preval did not.

Then there was the $198,000,000 in Petro Caraibe funds, deposited in a Panamanian account. This was for hurricane reconstruction projects. Preval stole this money and Gonaives, Cabaret and other hurricane devastated areas remain the same today as they were following the 2008 hurricane strike.

Preval has effectively derailed the reconstruction programs for the January 12 quake.

He will do the same for the 2010 hurricane season.

We must have a new, truly independent CEP – Electoral Council, not one people by Preval appointees, mistresses and first cousins.

The International Community must expend the time, money and effort to guarantee a fair count in the November vote, otherwise the concept of Democracy is dead.