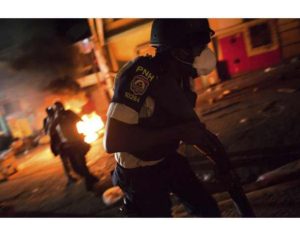 Last night saw a number of attacks on police in Freres, Canape Verte and other areas as gunmen shot up patrols. Several officers were killed while others injured. These losses add to those of the previous two nights when others were killed and wounded.

Motivation is still not known but the majority of Haitians believe it is another cynical effort by Preval to disrupt the electoral process and allow him to retain power up to, and beyond May 14.