NEW YORK (Reuters) – Former U.S. President Bill Clinton hopes that pledges to help quake-devastated Haiti at his philanthropic “summit” this week will push governments to fulfill promises of billions of dollars in reconstruction.

Clinton, who is the U.N. special envoy for Haiti, will hold a special session on the recovery of the impoverished Caribbean nation with Haitian President Rene Preval and Prime Minister Jean-Max Bellerive at the Clinton Global Initiative.

More than 1,000 people including heads of state like U.S.President Barack Obama, business leaders including Microsoftco-founder Bill Gates, humanitarians and celebrities will attend the meeting in New York, starting Tuesday.

Putting a spotlight on Haiti “might help shake loose some of the donor commitments from the governments,” Clinton told Reuters in an interview.

In March, international donors pledged more than $5 billion over two years to rebuild Haiti after a Jan. 12 quake killed up to 300,000 people, devastated the country’s economy and infrastructure and left more than a million people homeless. 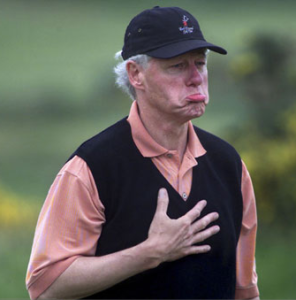 “How fast we can move depends in large measure on whether these commitments will be honored that have been made, but I’m hopeful,” said Clinton.

When Clinton’s initiative began, corporations tended toshow up and write checks to fund humanitarian programs. Now many see their philanthropy in terms of investment opportunities.

In the past five years, there have been more than 1,700commitments worth $57 billion that the group says has improved the lives of 220 million people in more than 170 countries.

Clinton said he would hold a session on the Middle East with Palestinian Prime Minister Salam Fayyad and IsraelI President Shimon Peres, focusing on “what happens if there is a peace agreement, how can you make the peace take hold.”

“The last thing I am trying to do is get back into the negotiations, I feel quite comfortable with the people that are handling it for our country,” said Clinton, who pursued peace in the Middle East as U.S. president. This month, his wife, Secretary of State Hillary Clinton, hosted the first direct talks between the countries in nearly two years.

The Clinton Global Initiative was found to be the most popular summit for chief executives in 2009, according to a study by public relations firm Weber Shandwick. Attendees pay$20,000 to be there and the rules state that if participants do not make or fail to keep a commitment they are not allowed to return.

Clinton said he would continue his philanthropic summit fo ras long as it was relevant. (Editing by Mark Egan and Chris Wilson)