September 25, 2014 AREAS WRITTEN IN BOLD ARE COMMENTS BY COLLINS, IN REPLY TO GLOVER’S MISREPRESENTATIONS OF TRUTH

In March of 2011, I accompanied Haitian president Jean-Bertrand Aristide on his trip home to Haiti following years of forced exile in South Africa. I did so in support of Haitian democracy and Aristide’s civil rights, and in protest against my country’s role in illegally removing him from power in 2004 and then preventing him from returning to his native land for seven long years. Today, Haitian democracy and the rights of Aristide are again under threat, and the U.S. government appears to be turning a blind eye.

Since returning to Haiti, Aristide has focused his energy on rebuilding and reactivating a medical university that he founded in 2001 and that had been closed down during his time in exile. Though he hasn’t been directly involved in politics, he remains a popular figure and is the leader of Fanmi Lavalas (FL) – a political party that has won the majority of votes in every election in which it has participated. However, FL has been kept off the ballot by Haiti’s authorities ever since the 2004 coup that led to Aristide’s forced exile.

Since returning, Aristide has funded anti-government activities, that would see him jailed in the United States under our anti-terrorism laws. No one but Aristide has kept them off the ballot as he refuses to authorize this. The Lavalas element is fractured into many small parts.

Haiti’s parliamentary elections, originally scheduled for 2011, are now three years overdue and the U.N. and other foreign entities have repeatedly called for them to take place before the end of the year. With Aristide back in Haiti, it would appear to be more difficult this time around for the government to prevent FL from participating. This is perhaps why the deposed president is once again under attack.

Lavalas is more than welcome to participate in any election. Unfortunately, elections have been blocked, and blocked again by 6 Lavalas senators who hold Haiti’s 11,000,000 people to ransom. Their term will expire in January, 2015 and Martelly will be able to hold elections in March – as promised during his visit to the UN in New York, without their selfish, Aristide-generated, interference.
Lavalas can the participate, and be beaten, in the electoral process. This is why Aristide has kept his team out of the elections. He wants to avoid the truth – Lavalas does not have the power it once possessed.
The poor now support Michel Martelly.

Last month, a Haitian judge reportedly issued an arrest warrant for Aristide. The case being mounted against him reeks of political persecution directly tied to efforts to suppress a popular alternative to the current administration of Michel Martelly, who is supported by conservative Haitian elites and the U.S.

Martelly is supported by Haiti’s massive majority and we must remember that 54% of the population is under 24. Most were not born when Aristide existed. They have no interest in him, or Lavalas and its promised violence.

Haitian democracy and the rights of Aristide are again under threat, and the U.S. government appears to be turning a blind eye.

The charges against Aristide stem from an investigation conducted by the illegal government established by the 2004 U.S.-backed coup. Under that government, human rights researchers found that some 4,000 people were killed for political reasons, while many others were imprisoned on bogus charges.

The charges stem from a number of investigations, in the United States, Canada and France, to name but a few.
During the embargo period, some 450 people were held in Haiti’s National penitentiary. With Aristide/Preval this became 3,500, many never having any sort of appearance before a judge.
Thousands were killed under the Aristide/Preval presidencies. Very few under General Cedras during the embargo period.
The media can create strange images, where none exist. The media created Aristide, but has now abandoned him, as the truth is revealed: Aristide is a murdering, thieving, child-molesting, cocaine trafficking, anti-American, ex-priest who had amassed a fortune of over $1,500,000,000 when he was finally removed in 2004.
No one was “necklaced” or kidnapped under Cedras.
With Aristide/Preval it became a daily occurrence.

Despite his powerful enemies’ best efforts, and a grand jury investigation in the U.S., no evidence has been produced that could support criminal charges against Aristide. In the meantime, the persecution of Lavalas and human rights defenders continues. On Aug. 20, Lavalas activist Clifford Charles was killed following a protest demanding the release of fellow activist Louima Louis Juste.

Aristide has not been indicted in the United States because he holds incriminating dossiers on many key American leaders. Some suggest Bill and Hillary Clinton would be destroyed were Aristide to be arrested.

The judge who issued the warrant for Aristide’s arrest has been disbarred from practicing law for 10 years – as soon as he steps down from his position as judge – for his role in the arrest last year of Andre Michel, an attorney investigating corruption within the Martelly administration. Lawyers for Aristide contend that they never received the initial summons from the judge and that when they did go to the court at the required time, the judge himself was a no-show.

Not true about the judge. However, Andre Michel was involved with a messy murder. The Aristide attorneys received valid service of documents.
When Aristide wished to block service, he purchased 4 vicious attack dogs that were there to prevent service. Unfortunately, the dogs attacked and killed an Aristide maid. She died in a Dominican hospital. 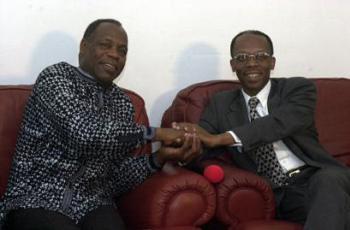 Now, in an apparent attempt at saving-face, the judge has ordered house arrest for Aristide, something that is not even legal in Haiti. The National Network for the Defense of Human Rights, Haiti’s most prominent human rights organization, has pointed out that these are not the actions of a neutral third-party.

House arrest is not really constitutional but was given Aristide out of respect for his situation as an ex-President. The solution is simple. Act in accordance with the Constitution, Arrest Aristide and confine him in the Croix des Bouquets facility with no cell phone or Internet service. Visitors limited to legal advisors.

On the night of Sept. 11, Haitian authorities went a step further, removing the security detail that had been with Aristide since his return from exile, a move that put him, his family and his supporters at risk. Haitian press reports indicate that the command came not from the National Police, who have been reluctant to act against Aristide, but straight from the National Palace.

Actually, the security detail was replaced by a more neutral team – two teams. One on the gates and one in the house.

The message was chilling and clear: The government can and will stop offering protection to the former president whenever it chooses to do so.

This is not true and Glover knows this. If he doesn’t, this is an admission that he knows nothing about Haitian realities, and should keep his nose out of Haiti’s internal affairs.

Is the government scared of facing Fanmi Lavalas in a free and fair election? President Martelly was elected in 2011, but only after intervention by the U.S. and its key partners, who arbitrarily overturned the results of the first round, thereby putting Martelly into the run-off election. Voter participation barely reached 20 percent.

The U.S. government was one of the main funders of those flawed elections and a major funder of the elections of 2006 and 2009, all of which excluded Fanmi Lavalas. The U.S. is also expected to provide key funding for the next elections, if and when they end up taking place.

Fanmi Lavalas has never been blocked from an election. They are fragmented and could never decide who would carry the banner. Their wounds were self-inflicted.

If elections aren’t held by the end of the year, terms will expire for the majority of the Senate and the entire Chamber of Deputies, effectively letting the president rule by decree. My country’s government is a de facto, if not active supporter of this rampant curtailing of democracy.

The Parliament’s term expires in January. Without the 6 Lavalas Senators blocking the process, elections will be held in March. They have missed the chance to cooperate, and protect their constituents’ rights. Instead, they demanded millions $$ in bribes to agree.

Is the government scared of facing Fanmi Lavalas in a free and fair election?

Actually, the question here is: “Is Aristide/Lavalas afraid of free and fair elections?? If not, have him register and sponsor candidates for the vote.

It’s time to end the campaign of attacks against Aristide and Fanmi Lavalas once and for all. Aristide, like all Haitian citizens, must be allowed to participate in politics without fear and intimidation being the norm.

Once Aristide faces trial and is either convicted, or acquitted, he is on the side. He was returned to Haiti when no other nation would accept him, as south Africa moved to rid itself of this poison. He was allowed back in Haiti when he promised to stay out of politics and focus on education.

As in the past, Aristide’s word is worth zero!!

My government has been complicit in undermining Haitian democracy for many years now – from the 1991 CIA-backed coup against the first Lavalas administration to the U.S. administration’s last-ditch effort to prevent Aristide from returning to Haiti in 2011.

This needs to change. The U.S. government should stand by its professed support for democracy and development and stop standing in the way of the popular will of the Haitian people.

Twice, the Americans have returned Aristide to an unwilling nation.
The will of the people – now – is Martelly.

Danny Glover, actor, producer and humanitarian, can be reached through Carrie Productions in Berkeley, at 510-450-2500. Follow him on Twitter: www.twitter.com/mrdannyglover. This story first appeared in the Huffington Post.

2 thoughts on “MORE POO FROM ARISTIDE APOLOGIST ACTOR DANNY GLOVER: “Stop the political persecution of Aristide and Fanmi Lavalas once and for all””