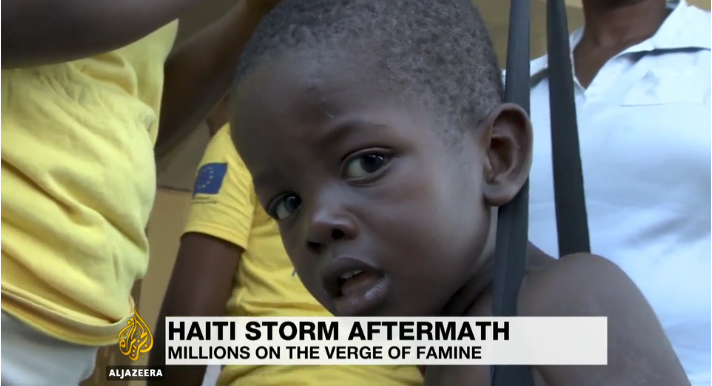 It’s been almost a year since southern Haiti was devastated by Hurricane Matthew.

It has also been almost eight years since an earthquake killed more than 300,000 people and left hundreds of thousands homeless.

But a recent visit to a UNICEF treatment centre in the south shows everything continues to go wrong in the country.

Dozens of malnourished children visit the centre daily, struggling against diseases and the endemic poverty that is so deeply entrenched in Haiti.

Unfortunately, this is nothing new.

Haiti has been struggling to feed its people for years. It is one of the poorest countries in the world.

Natural disasters only deteriorate the situation. Hurricane Matthew had a devastating effect on food production. Agricultural plots, seeds and irrigation systems were destroyed.

One year on, not much has changed.

Everyone we spoke to repeated the same phrase over and over again: “I used to have … but now it’s gone.”

It was very little, but at least some had a business, or seeds, or nets and other sources that would help them feed themselves. But they were destroyed by the hurricane.

The UN has some small programmes assisting farmers, and is currently working on long-term development ones. But that’s not enough to get people out of the current crisis.

The UN appealed for more than $56m for food security. I have been told that less than 50 percent of that was provided by donor countries.

But that’s not the only problem. Nine months ago, Haiti’s new President Jovenel Moise took office, with the promise to increase support to the country’s agricultural sectors.

Farmers denounce that only 6.9 percent of next year’s budget has been assigned to assist communities in desperate need of help. Moise has also raised taxes and that’s why demonstrations have been ongoing in the capital for months.

The president was elected in an electoral process in which only 20 percent of the population voted.

“Moise has very little support. The only ones that are keeping him in power are the United States, France and the international community,” a source told me in Port-au-Prince.

“It’s been designed to benefit the elite and to continue strangling the poor,” said economist Camille Charlemers.

“It is what keeps us dependent on foreign aid. Without food production, Haiti needs to import almost everything.”

And of course there is massive corruption. A recent investigation showed how politicians, including the presidents and prime ministers, allegedly embezzled around $2bn from a Petrocaribe deal with Venezuela.

Haiti is currently paying off that debt while millions are going hungry.

Some historians have said that the country has been condemned since it was born, adding that the first black republic was a bad example. They say that ‘slaves’ were not supposed to have a nation and that’s why a brutal embargo was imposed by France, Spain, the US and the UK.

Over 200 years later, Haiti continues to struggle, a victim of the ruling elites that profit from the enormous poverty rates in the country, and of an international community that, for whatever reason, continues to fail.