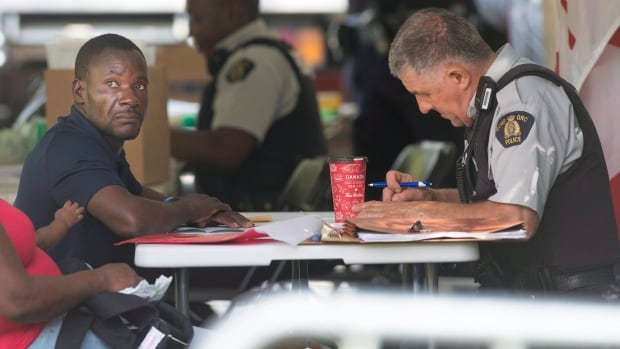 An asylum seeker is processed by RCMP officers after crossing the border into Canada from Champlain, N.Y., in Hemmingford, Que., August 4. (Ryan Remiorz/Canadian Press)

In the U.S. immigration debate, it’s called “twilight status,” and for many who hold it, the light is flickering and fading.

Unlike Canada or Mexico, which both routinely deport almost anyone without a valid visa, the U.S. government allows otherwise-illegal immigrants to remain without legal status — sheltered under various forms of government sufferance.

About 59,000 Haitians received Temporary Protected Status (TPS), a U.S. government waiver exempting them from deportation to their devastated homeland, after a catastrophic earthquake struck near Port-au-Prince in 2010.

That waiver was renewed several times by the Obama administration, which judged that Haiti was not ready to absorb returnees.

Then this summer, Secretary of Homeland Security John Kelly (now White House chief of staff) signed off on a very short renewal — six months — letting it be known that there would probably be no more extensions.

“This six-month extension should allow Haitian TPS recipients living in the United States time to attain travel documents and make other necessary arrangements for their ultimate departure from the United States,” he said.

Fuelled by rumours Canada would be more sympathetic, many Haitians headed north — crossing to Hemmingford, Que., at a rate of about 250 people a day.

The Haitians are just one group among many that could soon be shown the door in the U.S., and might then show up on Canada’s doorstep.

On Sunday, Prime Justin Trudeau spoke about the “situation at the border at Saint-Bernard-de-Lacolle,” saying “entering Canada irregularly is not an advantage,” and that rules will be enforced to safeguard against security risks.

The Government of Canada is planning outreach efforts with Haitian communities in both Canada and the U.S., said Nancy Chan, a spokesperson for Citizens and Immigration Canada (CIC).

“We are taking a number of proactive measures to counter misinformation regarding Canada’s asylum system, including using social media,” said Chan.

Living on a waiver

Life on a deportation waiver is not easy.

First of all, the waivers are not free. Haitians were asked to pay $495 US for their six-month extension if they wanted the right to work. That’s one reason many chose to invest the money in a ticket to Canada. (Some did renew their waivers, and Canada may see a second wave of Haitians arrive when their final deadline of January 22 approaches).

The waivers also do not provide a pathway to permanent legal residency. The Haitians who fled into Quebec have always known they were living on borrowed time.

‘The countries that are facing the end of their grant under TPS are the ones who feel most under the gun’ – Julia Gelatt, senior policy analyst at the Migration Policy Institute

Nicaraguans and Hondurans received protected status in 1999 as a result of Hurricane Mitch, but it applies only to people already in the U.S. when the hurricane struck.

All of those 10 waivers come up for renewal at some point in the next 13 months, and the Trump administration seems likely to allow at least some of them to die.

But Chan did not answer a question about how the Canadian government would deal with other groups: “We will not speculate on future scenarios.”

An estimated 317,000 people live on TPS waivers. More than half of them are Salvadorans granted TPS following the earthquake of 2001; they are facing a renewal decision by March next year. The remainder are mostly Hondurans and Haitians, who both face a renewal decision in January.

But TPS is not the only kind of twilight status, says Julia Gelatt, senior policy analyst at the Migration Policy Institute in Washington.

“There are a number of other categories you could also put in there. There are people who are applying for different kinds of visas, such as a U visa for crime victims or a T visa for victims of trafficking.” 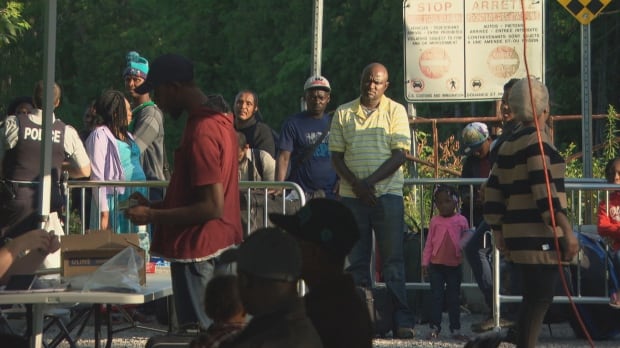 People who crossed into Canada at an illegal crossing in Saint-Bernard-de-Lacolle, Que., stand inside barricades as they wait to be processed by RCMP officers. (CBC)

“A lot of people who are in these categories are pretty confident their visa is coming, as opposed to people in TPS whose programs are being reconsidered, and cancellation is a more imminent concern.”

Also in March next year, a different waiver program called Deferred Enforced Departure will come to an end leaving about 14,000 Liberians (most of whom fled their country’s civil war years ago) with a tough decision to make.

“The countries that are facing the end of their grant under TPS are the ones who feel most under the gun,” says Gelatt. “There’s this looming deadline.”

If those migrants suddenly lose their legal status in the U.S., they could head for Canada.

These groups, however, are dwarfed by a class of people referred to as “Dreamers,” named for the oft-introduced but never-approved DREAM Act.

The Development, Relief, and Education for Alien Minors Act (DREAM), was crafted to help those brought to the U.S. as children by allowing them to live in the country where they grew up providing they graduate from school and have no criminal record. About 65,000 kids in this category graduate from U.S. high schools annually.

The DREAM Act has been struggling to become law since 2001, and has often seemed close to bipartisan success. But in recent years more Republicans have turned against it.

In the meantime, the Dreamers must get by with a less secure status called Deferred Action for Childhood Arrivals (DACA) — a temporary reprieve, renewable every two years (at a fee), with no path to citizenship. 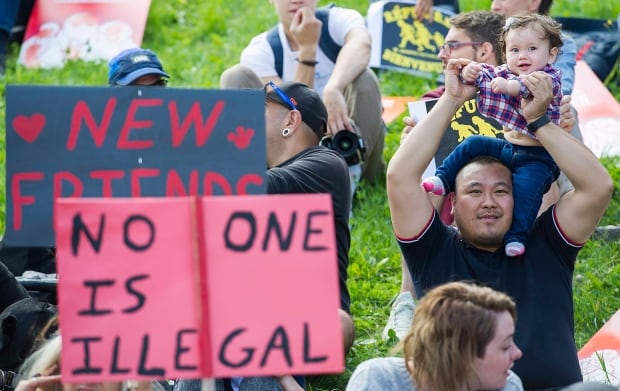 A man holds up a baby during a rally in support of asylum seekers outside the Olympic Stadium in Montreal, August 6. The stadium is now being used as a temporary shelter for some of the hundreds of asylum claimants pouring across the New York-Quebec border every day. (Graham Hughes/Canadian Press)

There are about 840,000 young people living on DACA waivers in the US.

U.S. President Donald Trump repeatedly said during the campaign that he would end the DACA program, and since his inauguration a handful of Dreamers have been arrested and held in detention, despite having paperwork that says they are enrolled.

Most threatening of all for the Dreamers, though, is the lawsuit threatened by Texas and nine other states. They have given the Trump administration a deadline of September 5 to shelve the program or face a court challenge for executive overreach. (In over three-quarters of cases, Dreamers were brought to the U.S. from Mexico.)

If Trump keeps his campaign promise, and ends the DACA program, all of the people currently covered by DACA would lose their status over the next two years.

It is not difficult to imagine that many Dreamers, who typically speak English as their first language, might prefer to try their luck in Canada than face deportation to a homeland they can hardly remember