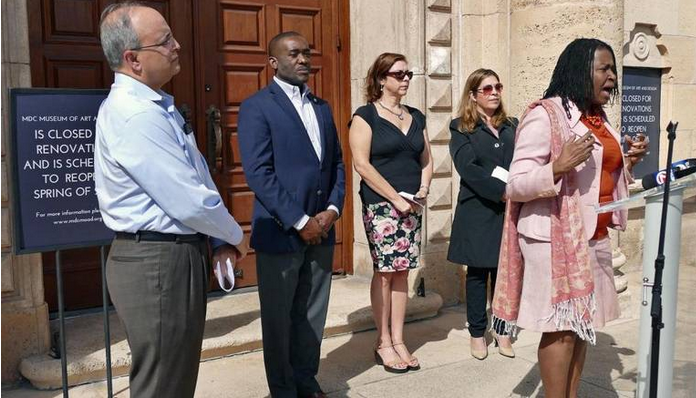 South Florida immigrant advocates are urging the Trump administration to not separate families as it decides whether or not to continue to extend legal protection to more than 300,000 Central Americans and Haitians who have been allowed to temporarily live and work in the United States.

The plea, delivered Friday on the steps of downtown Miami’s Freedom Tower, comes as the U.S. Department of Homeland Security prepares to decide in the coming weeks whether to extend Temporary Protected Status, or TPS, to immigrants from Honduras, Nicaragua, Haiti and El Salvador.

“In 11 days, 57,000 Hondurans and Nicaraguans will know their fate on whether they will be torn apart and subject to detention and deportation,” said Maria Rodriguez, executive director of the Florida Immigrant Coalition. “In 28 days, 50,000 or more Haitian families can be faced with the tragedy of being separated from their children, deported to a land not safe for their future. In 74 days, 195,000 Salvadorians will be faced with potential detention, deportation even after being in this country— some of them— for more than 19 years.”

Rodriguez and other advocates noted that many TPS-holders are the parents of U.S.-born children, hold mortgages and contribute hundreds of thousands of dollars to Florida’s economy.

Miami-Dade County Commissioner Jean Monestime said Florida stands to lose $1.2 billion in Gross Domestic Product if the 21,900 Haitians with TPS who call the state home cease being part of the workforce. Another 6,400 Honduran workers who fall under TPS contribute an additional $340 million to Florida’s economy. The 3,100 Salvadorians’ $167 million contribution would also be lost, Monestime said.

Nationally, the United States stand to lose $164 billion in GDP over the next decade if TPS for Haitians and Central Americans is terminated, according to an Oct. 20 report by the pro-immigration group Center for American Progress.

“Not renewing Temporary Protected Status for these families has a tremendous detrimental impact to our pocketbook and our economy,” Rodriguez said. “But the cost of not renewing also has a tremendous social cost. When you take away the status of these families, when you take away their work permits, driver’s licenses and …make them vulnerable to detention and deportation, American citizens are severely hurt. Some of those are the children of those [potentially] to be deported.”

On Saturday, the Haitian Women of Miami is scheduled to hold what founder Marleine Bastien described as its final TPS rally, between 3 p.m. and 5 p.m. in front of the United States Citizenship and Immigration Services office, 8801 NW 7th Ave., Miami.

While advocates of extended TPS fear that discontinuing the benefit will drive immigrants into the shadows, proponents of ending the designation say it was never meant to be permanent. Earlier this year former DHS chief —now President Donald Trump’s chief of staff — John Kelly called on Congress to fix the problem by passing legislation.

Bastien said Congress has heard the message and at least four lawmakers are ready to introduce legislation to address TPS on a permanent basis. In at least one case, legislation from Rep. Nydia Velázquez, D-New York, there is language for a path to citizenship and the bill would incorporate TPS holders from African nations. Others with legislation include Reps. Yvette Clarke, D-New York; Frederica Wilson, D-Miami and Miami Republican Carlos Curbelo.