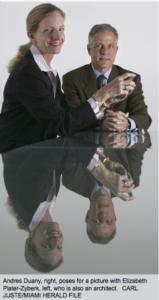 Andrés Duany — the famed Miami architect — has designed a basic, inexpensive and easy-to-assemble house that could shelter thousands of displaced Haitians.

Can a stripped-down, bunkhouse-like structure made of near-indestructible, space-age materials provide a solution to Haiti’s post-quake housing crisis?

Duany, who helped develop the prefabricated “Katrina Cottage” as an alternative to the widely criticized FEMA trailers, has devised a light, expandable “core house” for Haiti’s homeless that can stand up to earthquakes and hurricanes. It even meets Miami-Dade’s tough building code, he says.

The house, which would sleep eight in a bunkhouse arrangement, could be easily shipped to Haiti in a package less than two-feet thick, and assembled by local laborers in a matter of hours, Duany said.

The material is a composite that Duany calls “totally miraculous” — thin but strong, durable, fireproof, waterproof and mold-proof. The idea grew out of a project Duany was already working on in Miami’s Little Haiti, to erect eight larger prefab houses using the same technique and material.

“You’ve never seen a house like this,” Duany said. “When you build something out of this material, it’s like being inside a fiberglass boat. It’s absolutely the best.”

A prototype of the Haiti house is now being readied at a Miami Gardens factory. On Saturday, Duany will fly to Haiti with University of Miami physician Barth Green’s medical team to examine potential locations for temporary camps identified by the Haitian government.

Among the questions Duany said he needs to answer: What kind of sanitation and sewage arrangements will be available, and how level and firm is the ground — details that would determine what kind of foundation the houses might rest on.

“Are you talking about outhouses or something else?” Duany said. “And I need to observe the ground — how flat, how sloped — and take core samples of soil.”

Duany hopes governmental, volunteer or corporate groups will sponsor and pay to manufacture, ship and install the houses, which he said would be vastly superior to the tent cities now being contemplated.

He does not yet know the cost of each house, but said it would be low. They would be manufactured by Innovida, the modular-home maker with a plant in Miami Gardens that is also making the Little Haiti homes.

Natural disasters like Hurricane Katrina and the Indian Ocean tsunami have inspirednumerous ideas for modular emergency and permanent housing, though not all have been widely embraced.

Duany, a co-founder of the New Urbanist movement, has considerable experience with disaster response. He and other New Urbanists — who urge development of walkable, sustainable communities as an alternative to auto-dependent sprawl — designed redevelopment plans and affordable, storm-resistant houses for New Orleans and other Gulf communities hit hard by Hurricane Katrina.

Duany said he and other New Urbanists are responsible for design and construction of about 3,000 post-hurricane homes in New Orleans and Mississippi. But he said even some of the simplest designs that came out of Katrina are too ambitious for impoverished Haiti.

He said that housing Port-au-Prince’s estimated 800,000 to one million homeless would require about 4.5 square miles and a density of about 500 people per acre.

“What people have to get their heads around is the magnitude of very large numbers. It’s also the reality of the poverty,” Duany said. “A house in New Orleans like those we did, which are for lower middle-class people, is like a mansion in Haiti. Haiti is just a whole new level.”

There is nothing fancy about the Haiti core house aside from the material. The rectangular house is the size of a small room — just over eight feet in height, with a floor about eight by 20 feet.

The sides would be open and covered with screens to permit air circulation. When it rains, waterproof fabric panels would be lowered to cover the openings. A canopy would extend out from the house to provide shade, shelter and space for possible outdoor cooking — already the practice for many Haitians.

Duany’s firm, Duany Plater-Zybker & Company, is designing modules that could be added to the core house to enlarge it and convert it into long-term housing.

“Short-term, our house needs just to get them out of the rain,” Duany said.