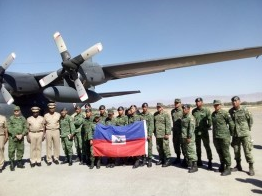 As part of an official visit, a Haitian delegation led jointly by the Chief of Staff of the Minister of Defense, Jean Harry Toussaint and Lieutenant General Jodel Lessage Commander-in-Chief ai of the Armed Forces of Haiti (FAd’H), composed of members of the General Staff and Defense Ministry officials, is currently in Mexico until April 14, 2019, in order to finalize the modalities and the agenda of Phase II of the bilateral military cooperation Mexico-Haiti.

According to this agenda, 3 activities will be realized during the month of April:

In addition to finalizingthe Phase II, the delegation will take this opportunity to explore new opportunities related to the implementation of Phase III.

During their stay, the members of the delegation will have the opportunity to visit :

These visits will allow the delegation to further explore the Mexican defense system.