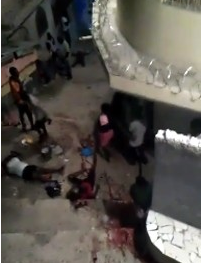 Let’s recall that Wednesday around 9:00 pm, at the stalemate Eddy (Carrefour-feuilles) heavily armed henchmen of Gang Leader “Tije”, opened fire on passersby, causing indescribable panic as many innocent fell under murderous bullets. The provisional toll of 4 dead and 10 wounded, now stands at 8 dead and 12 wounded :

8 dead : 4 on the spot and 4 in the hospital following their wounds, including Jean Eddy, Ti Pay AC, Daniel Gilblas and Mrs. Smith a pregnant woman.

Thursday, following the tragedy of the impasse Eddy by the gang of “Ti Je”, which made 20 victimes, Prime Minister Jean Michel Lapin convened an emergency meeting of the Superior Council of the National Police (CSPN).

At the end of this meeting, the Prime Minister acknowledged that what happened on Wednesday “weakened the responsibility of the state” (to protect the citizens), said that new instructions were passed in order to carry out targeted operations in areas deemed sensitive and “allow the population to regain the confidence of the state.” Lapin appealed to the co-operation of citizens to denounce individuals suspected of being complicit with bandits to “provide a definitive solution to public security problems in this area”. According to the acting Prime Minister, “this situation that arises from a social problem is unacceptable”.

In his speech, the Government Commissioner Paul Éronce Villard declared “The country can no longer support this moral and ethical degradation” while saluting the memory of the victims and offering sympathy to the wounded and their families, he said that in order to provide a rapid response to this attack “in the coming hours, a response will be given to what happened…”, emphasizing “Justice will fulfill its role as it should be…”

Jean Roody Aly, the Minister of Justice and Michel-Ange Gédéon, the Director General of the National Police of Haiti (PNH) present at the meeting, made no statement at this press conference.

Moreover, the “Fondasyon Je Klere” (FJKL) in a note protests against the trivialization of the right to life in Haiti and regrets that for some time “the country has become a boat without rudder marked by the systematic violation of rights to life and the physical and moral integrity of citizens. The FJKL denounces the inaction of the State which “does almost nothing to prevent such acts and does not exercise any form of serious pursuit against the perpetrators and accomplices of these villainous acts, shameful and totally unacceptable.”

The Foundation presents its sympathies to the victims and asks the ruling power to do everything possible to ensure that those responsible for this new massacre are identified, wanted, arrested and brought to justice.

Haiti is a land of no secrets. Those guilty are already known. Steps should be taken to eliminate them from our society. Otherwise Impunity will make them, and others, grow more confident with disastrous results.