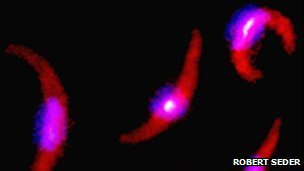 A malaria vaccine has shown promising results in early stage clinical trials, according to researchers.

Researchers found the vaccine, which is being developed in the US, protected 12 out of 15 patients from the disease, when given in high doses.

The method is unusual because it involves injecting live but weakened malaria-causing parasites directly into patients to trigger immunity.

The research is published in the journal Science.

Lead author Dr Robert Seder, from the Vaccine Research Center at the National Institutes of Health, in Maryland, said: “We were excited and thrilled by the result, but it is important that we repeat it, extend it and do it in larger numbers.”

It has been known for several decades that exposure to mosquitoes treated with radiation can protect against malaria.

However, studies have shown that it takes more than 1,000 bites from the insects over time to build up a high level of immunity, making it an impractical method of widespread protection.

Instead, a US biotech company called Sanaria has taken lab-grown mosquitoes, irradiated them and then extracted the malaria-causing parasite (Plasmodium falciparum), all under the sterile conditions.

They are clearly very early stage trials in small numbers of volunteers, but without question we are extremely encouraged by the results”

These living but weakened parasites are then counted and placed in vials, where they can then be injected directly into a patient’s bloodstream. This vaccine candidate is called PfSPZ.

To carry out the Phase-1 clinical trial, the researchers looked at a group of 57 volunteers, none of whom had had malaria before.

Of these, 40 received different doses of the vaccine, while 17 did not. They were then all exposed to the malaria-carrying mosquitoes.

The researchers found that for the participants not given any vaccine, and those given low doses, almost all became infected with malaria.

However for the small group given the highest dosage, only three of the 15 patients became infected after exposure to malaria.

Dr Robert Seder said: “Based on the history, we knew dose was important because you needed 1,000 mosquito bites to get protection – this validates that.

“It allows us in future studies to increase the dose and alter the schedule of the vaccine to further optimise it. The next critical questions will be whether the vaccine is durable over a long period of time and can the vaccine protect against other strains of malaria.” 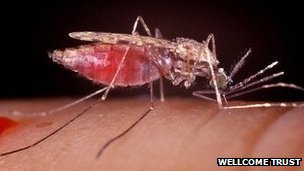 Malaria kills about 600,000 people each year and infects more than 200 million

He added that the fact that the vaccine had to be injected into the bloodstream rather than into or under the skin made delivery more difficult.

Commenting on the research, Dr Ashley Birkett, from the Path Malaria Vaccine Initiative, said: “They are clearly very early stage trials in small numbers of volunteers, but without question we are extremely encouraged by the results.”

He added that most current vaccine candidates targeted parts of the P. falciparum parasite rather than the whole organism.

“This approach induces a broad response against a lot of different targets on the parasite,” he said.

There are currently about 20 malaria vaccine candidates in clinical trials.

The most advanced is called RTS,S/AS01, which has been developed by the pharmaceutical company GlaxoSmithKline, and is in a Phase-3 clinical trial involving 15,000 children in Africa.

According to the latest figures from the World Health Organization, there were an estimated 219 million cases of malaria in 2010 and an estimated 660,000 deaths.