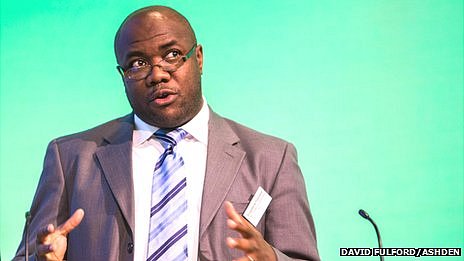 Disaster struck Haitian stove-maker Duquesne Fednard only a week after his workers were trained and ready to start production.

The January 2010 earthquake killed more than 220,000 people and made more than 1.5 million homeless in Haiti.

Mr Fednard’s new stove-making factory was destroyed, along with all but two pieces of equipment.

He had been in New York at the time of the quake. Mr Fednard returned to Haiti six weeks later and called a meeting with his 15 employees to tell them that with everything destroyed the business was over. 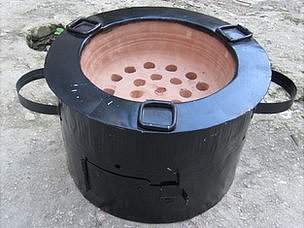 But Mr Fednard’s employees refused to let him walk away.

“One guy said to me, ‘This is the only thing right now that we were holding on to. The earthquake took away our families and houses and everything we own. You’re taking the last thing that we were counting on.’ ”

Mr Fednard was humbled. “After a statement like that, I felt like it wasn’t about me anymore.

“This was more about giving these people hope.”

Production was moved into two tents donated by a local businessman, with the stoves made using artisanal techniques.

In Haiti, most people use metal charcoal stoves to cook their food.

Mr Fednard is the founder and chief executive of D&E Green Enterprises, a company that makes a fuel-efficient stove called the Eco Recho, which uses only half the charcoal of regular ones, and sells for £7 ($10.50) to £8.50.

The Eco Recho stoves are more efficient because, although they have a traditional metal exterior, there is also a heat-retaining inner ceramic layer.

You need to make business part of aid. That is how you are going to see the greatest return and the greatest impact”

An entrepreneur since his teens, Mr Fednard left Haiti at 18 to go to college in the US, using savings from his own businesses, including a print shop, and help from siblings to fund his move.

He was in America for more than a decade where he also worked in investment banking.

However, his aim was always to return home to help his country.

While on a trip to Ghana, he saw a cooking stove that used substantially less charcoal than regular versions thanks to better insulation and design.

With Haitian families spending up to a third of their income on charcoal, it was clear to Mr Fednard that a similar product would have both demand and a positive impact.

Such a stove would put less pressure on wood supplies in a country that suffers from severe deforestation – tree cover in Haiti today is only 1.5%, compared with almost three-quarters of all land in the 1920s.

Mr Fednard, now 36, used his savings to build a factory and quickly start production on a similar stove, and to modify its design according to customer feedback.

But then the earthquake struck, and three years on the company is still producing the stoves in tents, though it has launched a crowdfunding campaign to raise money for the factory building and equipment so it can mechanise production. 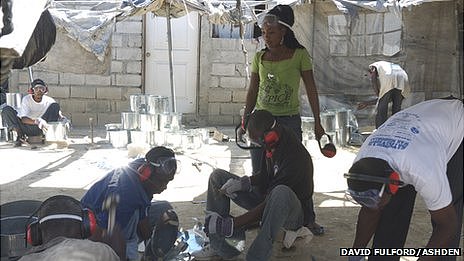 D&E plans to start exporting the stove to neighbouring countries soon, and to then expand to sustainable energy technologies.

“The goal right now is to come up with an alternative fuel that we can produce in Haiti that can replace charcoal,” Mr Fednard says.

The company is looking at making briquettes from agricultural waste and materials such as sugar cane, sawdust and rice husks.

It is also piloting a programme for rural electrification, giving villages access to electricity for the first time. D&E plans to generate electricity using agricultural waste.

Mr Fednard recently won an international award for economic development. He strongly believes that business will provide the way out of poverty for Haiti, and that there is too much reliance on aid.

“You need to make business part of aid,” he says. “That is how you are going to see the greatest return and the greatest impact.” 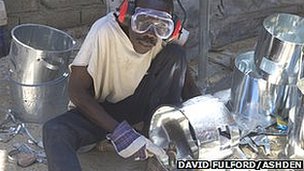 He believes that having a job is the first step towards a better life for people in a country where two-thirds of adults are unemployed.

Mr Fednard’s employees are all from the infamous Cite Soleil slum of the capital, Port-au-Prince, and for half of them this is their first job.

“My whole idea of development is that it’s a holistic approach,” he says. “Giving somebody a job is the first step, because you restore that sense of dignity and hope in that person.”

The company gives workers a meal every day, and is hoping to provide health insurance and a stipend for education too.

Recently Smith, the employee who encouraged Mr Fednard to continue with the business after the quake, has moved out of Cite Soleil for the first time in his life.

Mr Fednard says: “Seeing how under very difficult circumstances life is changing for our employees who just started to work three years ago and can now actually purchase a home, to me that’s a victory.”