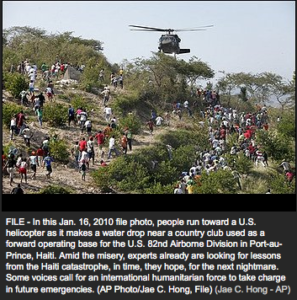 — Tons of rice and beans tell how the world is helping Haiti. Missing tents, tarps and toilets show how it is falling short.

Amid the misery, experts already are looking for lessons from the Haiti catastrophe – in time, they hope, for the next nightmare. Some voices call for an international humanitarian force to take charge in future emergencies.

Haiti’s Jan. 12 earthquake has tested man’s humanity to man more than any natural calamity in modern memory, challenging the ability of the community of nations and its global emergency network to meet an unprecedented volume of demands for food, water, medical help and shelter.

“This is a major test for all of us and we cannot afford to fail,” U.N. humanitarian coordinator John Holmes told aid groups after his latest visit to the crippled Caribbean nation.

His private message Feb. 16 candidly acknowledged they were failing in one key area – working together. The U.N. undersecretary-general cited “steady improvement of coordination” in a subsequent Associated Press interview. But he added, “Does that mean we’ve got it all right? No, it doesn’t.”

Holmes has ordered an early “real-time evaluation” of what has gone right and wrong in Haiti. The U.N.’s Geneva-based independent inspectors, meanwhile, plan their own longer-range review.

What went wrong with coordination has ranged from the elementary – ill-advised handouts of infant formula – to the complex, beginning with complaints the U.S. military turned away too many relief flights in the first days of crisis.

Learning the lessons of Haiti is taking on added urgency because planners expect the world’s natural disasters to grow in scope and frequency, as expanding populations crowd vulnerable coastlines and quake and flood zones, and climate change threatens more extreme weather events.

The military is expected to play a greater role, as the U.S. and other governments recognize that helping hands in uniform can boost their image and security ties to stricken nations. Since the 2004 Indian Ocean tsunami, the U.S. military has deployed 40 times to natural disasters worldwide.

Along with airlift and other assets, however, the military brings along a culture of secrecy and resistance to outside authority that sometimes partners poorly with civilian aid groups.

Civilian-military coordination “has been one of the greatest challenges created by the increasing deployment of foreign military assets,” concluded military and other experts who studied disaster response for the Stockholm International Peace Research Institute.

The first rush of food aid was randomly targeted and poorly coordinated, although distribution improved as weeks went by. As of Feb. 20, a food “surge” had delivered two-week rice rations to almost all 3 million people in need, the U.N. said.

Distribution of clean water also took weeks to reach most in need. Many still have little access, raising concerns over reports, for example, that ill-informed aid groups were handing out infant formula, potentially mixable with unsafe water.

As human waste builds up, almost 1 million displaced people in Port-au-Prince and elsewhere need emergency latrines, the U.N. Children’s Fund says. And as Haiti’s seasonal rains approach, the U.N. says only 30 percent of 1.2 million newly homeless have received tents or tarpaulins to shelter their families. Shelter planning among U.N. and other aid organizations and the Haitian government has gone slowly.

France had similarly proposed an “International Humanitarian Force” after the Asian tsunami, and the U.N. Joint Inspection Unit in 2006 recommended that international law endow Holmes’ U.N. agency, the Office for Coordination of Humanitarian Affairs (OCHA), with greater authority to direct a global response.

Those ideas got nowhere. “It’s just a lack of leadership,” Tadanori Inomata, the chief inspector in the 2006 review, said of the U.N.’s inaction.

He still sees an “urgent need” for OCHA to take fuller charge in such emergencies, and says his unit will next review the performance in Haiti.

Holmes told the AP it’s “probably not that realistic” to envision having a standing force and worldwide supply stockpiles for emergencies. As for added OCHA authority, the British ex-diplomat doubted “U.N. agencies, the Red Cross or others would accept that I have direct executive authority over them, and I won’t seek that.”

One experiment in U.N. coordination with world militaries has faltered: an OCHA database listing transport planes, rescue teams and other military assets potentially available for disaster response. The U.S. military, by far the most capable, never offered any listings.

“I think we’re moving away from the Central Register,” Alan Butterfield, of OCHA’s civil-military coordination section, said of the database.

The sometimes halting civil-military cooperation in Haiti, where the U.S. Southern Command deployed as many as 20,000 personnel to help the recovery, could be seen in a series of formal U.S.-U.N. agreements needed to clear away obstacles.

On Jan. 22, the U.S. agreed to support priorities in Haiti identified by the U.N. – not unconditionally, but “as appropriate.” That three-page document also said further coordination steps were needed. Not until Jan. 26, two full weeks after the quake, did the U.S. and U.N. set up a joint center to arrange security for aid deliveries, a concern from the start.

Rather than rely on belated agreements, Inomata’s U.N. recommendations likely would establish such priorities and structures beforehand by international regulations and standards.

Despite its big role, the U.S. military doesn’t coordinate at high levels with the U.N. relief structure. After the quake, it took five days for Holmes’ OCHA to embed a liaison at the Southern Command’s Miami headquarters, in part because the Americans required someone with U.S. security clearance.

“It might have been good if they (OCHA’s civil-military coordinators) were brought into the picture earlier on,” disaster specialist Linda Poteat of Interaction, a coalition of U.S. aid groups, said in a telephone interview from Haiti. Like others, she expressed dismay at the early delays in humanitarian flights.

An internal NATO study was more blunt. “US agencies did not coordinate with UN,” the 2008 report observed about the military’s response to the Indian Ocean tsunami, which killed some 230,000 people in 11 countries. “They had the perception that the UN is useless.”

As a result, the NATO authors said, there was “duplication and overlap of aid in some regions, whereas other regions were neglected.”

On the U.N. side, the 2006 inspector’s report cited weaknesses in OCHA’s staffing, now numbering 1,965, saying its system of one-year contracts produces instability and a high turnover.

Holmes himself took to task OCHA’s own “clusters” in Haiti, the system devised after the tsunami that assigns to single agencies the task of coordinating aid from many groups – UNICEF for the water cluster, for example, and the Red Cross for emergency shelter.

He said some cluster leaders had failed to devote enough hands and heads to coordinating up to 200 organizations.

“A huge emergency like this has brought out the extent to which managing these clusters is a full-time job,” he told the AP.

Like nothing before, the enormity of the Haiti emergency swamped the world’s ability to help. Disaster specialists now will look into that swamp for clues to next time. But no one mistakes what the big problem was.

Said Holmes, “There are limits to being 100-percent prepared.”