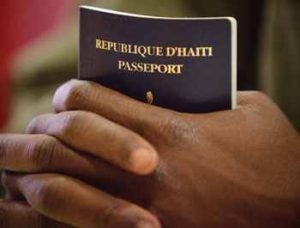 SAN JUAN, Puerto Rico — A former lawyer for ex-Haitian President Jean-Bertrand Aristide says the ousted leader has applied for a Haitian passport but has never heard back from his homeland’s government.

The head of the Boston-based Institute for Justice & Democracy in Haiti says Aristide has repeatedly requested a Haitian passport.

Aristide’s office in South Africa has not responded to requests for comment.

After being ousted in 2004, Aristide was flown into African exile aboard a U.S. plane.

All Aristide has to do is apply for a passport and he will receive one.

The problem created by Aristide is his demand for a Diplomatic Passport.

If he really wanted to go back to Haiti he could pay a few hundred dollars, get a Haitian passport and fly back.

It is up to Aristide.

Fish or cut bait, as they say.