President of the Senate, Simon Dieuseul Desras  and Senator John Joel Joseph must have some substantial evidence of previous crimes to suppress, involving themselves, or close associates, in order for them to  expend their personal reputations on an obvious effort to block the legal system.

Pragmatists suggest that the Senators have no reputations to protect so their actions have no damage to themselves.

With the Aristide – Lavalas – Preval – Inite record to date, encompassing necklacing, murder, child molestation, human sacrifice, drug trafficking, major thefts of State funds and electoral fraud, one has a problem to think of anything we don’t already know.

Michel Andre  and Enold Florestal have  been prominent in recent efforts to destabilize the Martelly/Lamothe government,  in company with associate Newton St. Juste. The fact that both of these people have been accused of major criminal activity, without any action by the court authorities, has led to their belief that they are untouchable in their service to Jean-Bertrand Aristide. Both are lawyers and, as such, are supposed to  uphold the laws of Haiti. Unfortunately, Haiti’s legal system is such that lawyers use their training in order to avoid prosecution. The existing environment sees them become more and more daring since there is obviously nothing to stop them.

So it is with Michel Andre and Newton St. Juste. Several years ago, a December, 2011 MINUSTAH report on human rights focused on Michel Andre for his membership in a Lavalas/Preval/Aristide group involved with planned murders and kidnaps. Investigators say that Michel Andre ordered the murder of Duverseau.

Nothing was done at the time.

During October, 2010, Michel Andre ordered the murder of 4year law student Frantzi Duverseau. Duverseau was executed by a 3 member PNH hit team on the front steps of his residence. Enold Florestal was also implicated. Seems as though Aristide/Lavalas had a coordinated team doing murder and kidnaps out of a police unit.

The evidence was there – to arrest and convict everyone – but nothing was done.

Finally,  the 3 officers of the actual PNH hit team are in custody and are talking.

Better late, than never. An arrest warrant was drawn up and served by Director General  L’ Association des Magistrats Haitiens, Maitre  Lamarre Belizaire, charging Enold Florestal and Michel Andre with murder.  Even as this action was underway, Senators Simon Dieuseul Desras and John Joel Joseph  spirited Michel Andre away to the safety of Senator  Desras’ house in Fermathe, purchased recently with $300,000 provided by an illegal source , for other  services that would see him cashiered from the American Senate and jailed for 20 years if he was a member of that body instead of Haiti’s mafia.

There was an assassination attempt on Maitre Belizaire, the judge who signed arrest warrants for the pair, and attempted service. This was a real attempt, not an imaginary one proposed by Haiti’s media in the case of Judge Serge-Jean Joseph.

Where is the hysterical reaction, demanding Justice?

Why aren’t the two Senators behind bars?

The Haitian society is a strange one in that it focused its total resources on the pursuit of a “non-story” – the death by stroke of Judge Serge-Jean Joseph and basically ignores the crimes of Michel Andre, Newton St. Juste and now Senators Simon Dieuseul Desras and John Joel Joseph  get away with murder???

And, Haiti prefers rumors to fact: A recent rumor saw President Michel Martelly, after a few drinks, telling a senator not to worry…. “Lamothe will be gone by mid-September…”

In Vino Verite as the old Latin phrase.

With the hate for Lamothe, among Martelly insiders, upset by the Prime Minister’s effort to bring some respect for lawand-order back to our society, the Nation is in peril. Playing on Martelly’s substantial ego, and growing paranoia, people like Thierry Mayard-Paul, Gregory Mayard-Paul and, of course,

Queen Sophia who fears any  investigation into her obvious criminal activities, ongoing even during Judge Serge-Jean Joseph’s investigation.

The Martelly inner circle wants a return to the comfortable criminality of Max Bellerive’s time as Prime Minister, when “laws, like bones, are meant to be broken.”

A return to the criminal pederast Bellerive, and his band of thieves, coordinated by Herve Day, will see Michel Martelly’s presidency wither and fail.

Aristide and Preval are waiting for the axe to fall.

Without Prime Minister Laurent Lamothe the Martelly presidency is doomed. Even now, the Americans are not authorized to meet with certain of the Haitian cabinet ministers.

But is anyone listening??

I hope Martelly has recovered from Carnaval and takes a serious, sober look at what should be done to support a guy who is supposed to be his friend – Laurent Lamothe- and save his government – save the Nation!!!

After all President Michel Martelly flew to see Rene Preval at his residence in Marmelade, a visit that saw him miss the Carnival Queens’ Reception, something he has never done, in order to kiss Preval’s butt!!

It is disgusting, and Preval insider’s agree with this viewpoint. In their opinion, they don’t need Martelly. He is already failed and will fall soon – with the removal of Lamothe.

He should look at the past. Here is a quote from Stanley Lucas’s site that says it all as history tries to return the past:  July, 2011 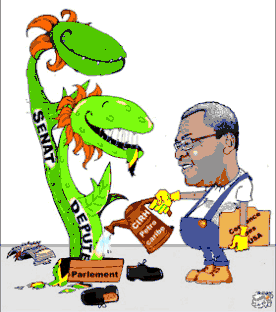 They have recommended the current Prime Minister, Jean Max Bellerive, who, in the eyes of the Haitian people and Martelly’s base, represents a total failure for his performance as Minister of Planning and as the Prime Minister in charge of the failed reconstruction over the past 18 months.

For Martelly’s base, Bellerive represents continuity of corruption and does not fulfill the mandate for change. In a last ditch effort to cling to some sort of power, INITE and Bellerive have called an IHRC meeting next week to promote him remaining in office. It is unheard of for a lame duck Prime Minister to presume to call such a meeting.

WAKE UP AND SMELL THE ROSES!!!!

THEY ARE TRYING THE BELLERIVE GAME AGAIN – WITH HIS EX-CHIEF OF CABINET HERVE DAY AS A SURROGATE CRIMINAL!!!