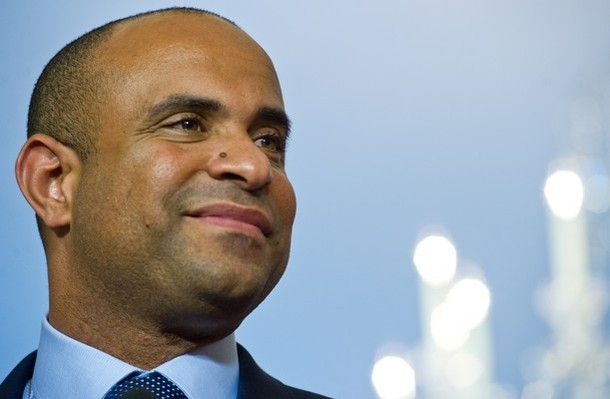 Former Prime Minister Laurent Lamothe, LSL World Initiative founder (LSLWI) Tuesday announced the establishment of The Dr. Louis G. Lamothe Foundation in honor of his late father. The Foundation’s mission is to fight exclusion in a socially divided Haiti by bringing citizens into community-based organizations where their voices can be heard. Further, by exposing the Haitian people to the power of knowledge and social responsibility, they can better make a contributions to the social transformation of their own country.

“The The Dr. Louis G Lamothe Foundation is an organization that aims to carry on my father’s work as a socially responsible activist in the fight for an inclusive and united Haitian society,” said Mr. Lamothe. “Decades of poverty, squalor, violence, economic insecurity and dictatorship have ravaged our country. As a result, Haiti is one of the poorest countries in the Western Hemisphere with a limited capacity to respond to the effects of political and social instability and natural crises. This Foundation is essential and long overdue as it will focus on providing the Haitian people with opportunities to transform their own country – something my father believed in and fought for.”

The Foundation will officially launch on January 15, 2016 at the Cine Triomphe, Champ de Mars in Port-au-Prince, Haiti. The day will begin with an exhibition of the works of Dr. Louis G. Lamothe, beginning at 9:00 a.m. and continuing until 4:30 p.m. A formal Foundation inauguration ceremony will commence at 5:30 p.m. and conclude at 7:30 p.m. The event will feature a documentary about the life of Dr. Lamothe and a cocktail reception.

During the event, Dr. Lamothe’s book, Alejandro Petion Ayuda Al Libertador Simon Bolivar & Los Mayored Poetas Latinoanericanos De 1850 a 1950, will be available for purchase. All revenue earned from the sale of the books will be donated to the Foundation to support its first social entrepreneurship project.

About Dr. Louis G. Lamothe :
“Dr. Louis G. Lamothe was a rare example of a Haitian intellectual who contributed to drawing Haiti and the Latin American countries closer together in order to advance social causes. His contribution was noteworthy in several different domains, including sport, higher education and particularly the teaching of the Spanish language and the works of great Latin American poets from 1850 to 1950.

After obtaining a degree in Spanish literature in Chile in November 1952, he completed a doctorate in literature in Madrid in 1956. He taught modern languages à the INAGHEI from 1975 to 1983 and at the Faculty of Ethnology from 1980 to 1995. In order to communicate his passion for the Hispanic culture to the younger Haitian generation and promote the language of Cervantès in the country, he founded the Lope de Vega Institute in 1962 and headed it until 1998. Lope de Vega allowed many Haitian executives to embrace the cultures of Latin America and Spain.

At the same time, he contributed to promoting the Haitian culture in Bolivia and Suriname. He remained a member of Suriname’s consular corps until his passing.

From 1956 to 1966, he published at least eight books with the goal of facilitating learning of the Spanish language and to provide insight into Latin American and Spanish cultures and literatures. During his career, he also received several prestigious distinctions, including:

He married Ghislaine Fortuney, who gave him two sons, Ruben and Laurent Salvador, to whom he has passed along key values, including the modesty, humility and his passion for excellence. A keen football player, Dr. Louis G. Lamothe made a significant contribution to the development of this sport in Haiti, and he encouraged both of his sons to play sports.

Dr. Louis G. Lamothe passed away in 1999. The Louis G. Lamothe Foundation is an initiative that aims to honor his legacy and to carry on his work to create a more inclusive and united society.”