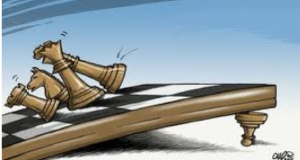 Haiti faced a major crisis over the last weekend, unnoticed by the majority of the nation’s 9,000,000 people. President Martelly was moving towards the firing of 2 advisors, Senators Lambert and Latortue. They are part of an inner circle that has continually given the president bad advice, creating major problems for his administration. Some wonder about Latortue and Lambert’s motivations. Perhaps the bad advice to Martelly was really given to create situation in which the president would look bad.

Lambert and Latortue are focused of retaining seats in the Senate. Without these, both will be open to arrest for their major involvement with Haiti’s cocaine traffic.

Along with Queen Sophia, Sir Thierry Mayard-Paul, and his brother, Sir Gregory Mayard-Paul, the Senators hate Prime Minister Lamothe. So this gaggle of malicious self-centered criminals  press King Martelly for the removal of Prime Minister Laurent Lamothe, from his position, even though he is doing a better job than any of his predecessors.

In other words, their own self-interests take precedence over the well-being of Haiti’s 9,000,000 peasants!

The Lambert/Latortue duo created a scenario in which they would present Laurent Lamothe as a man set on carrying out some sort of convoluted Parliamentary coup against his friend, and president, Michel Martelly.

Assisting in this dangerous scenario was Arnel Belizaire, and his associates who dance to Aristide’s drum.

Laurent Lamothe is politically naïve and can never be accused of plotting anything other than his direct, and specific task of making Haiti’s economy better as he improves the lives of our population.

Parliament must leave Lamothe to coordinate the day-to-day business, of the country, while President Martelly does what he is best at, being a charismatic leader.

Laurent Lamothe is by far the best Prime Minister we have had since 1986. To lose him, at this critical point in time, will discourage the International Community as it finally begins to take Haiti seriously.

Let us stop this stupid political maneuvering and get on with saving the Nation.