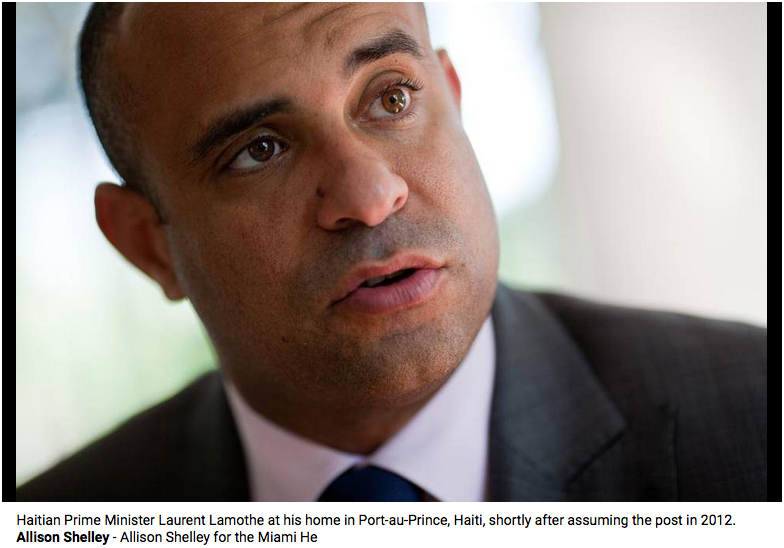 Laurent Lamothe, the ex-Haitian prime minister whose bid for the presidency was rejected this week by a panel of electoral judges, isn’t giving up so easily. He plans to appeal the decision, he said, before Friday’s midnight deadline.

Senator Steven Benoit (on the left) speaks to then Prime Minister Laurent Lamothe during a helicopter tour of Haiti after Hurricane Sandy struck the country in October 2012. Benoit, who has filed to run for president like Lamothe. | Jacqueline Charles MIAMI HERALD

That means pointing out the arbitrary nature of Haiti’s electoral council, Lamothe said. Of the 70 people vying to become president, the candidacies of 23, including Lamothe, were challenged. He and two others were rejected while no opinion was given in seven other cases. But judges did recommend that 13 people be allowed to move forward, including former Social Affairs Minister Josefa Raymond Gauthier.

Like Lamothe, Gauthier lacks the required parliament-approved clearance — known as a décharge— to run. The clearance certificate is necessary to show that former government officials properly managed public funds during their tenure.

In Haiti, only two institutions can grant the discharge clearance. For mayors and executive directors of agencies, it is the superior court of auditors. But for ministers, the process has to start at the court and end with a vote by a 15-member bicameral committee of parliament.

Haiti has been without a parliament since January, leaving President Michel Martelly to rule by decree. Last week, amid an unsuccessful media blitz by Lamothe to put public pressure on Martelly and the council to accept his candidacy without the clearance, Martelly said no presidential decree would be granted to allow someone without the discharge certificate to run.

Still, a panel of five judges ruled that Gauthier, who also served as minister of planning and the executive director of a government agency under Martelly, should be allowed on the ballot.

The judges’ favorable ruling takes into account that Gauthier have positive audits about her management of public funds and made an effort to get her discharge from parliament.

“The candidate was able to demonstrate that she had made a reasonable effort to obtain the discharge certificate,” judges wrote. They continued that because parliament didn’t do its job, and now no longer can’t, Gauthier should be maintained.

The judges’ cited the legal argument raised by former interior minister and presidential candidate Thierry Mayard-Paul who won an emergency court order saying he should be allowed on the ballot because it wasn’t his fault there is no parliament to clear him.

Lamothe filed a similar suit and said like Mayard-Paul, who wasn’t among those cleared to run, he also received the same court order.

“On the merits of my legal case, she gets through and I get flush,” said Lamothe, who also served as minister of foreign affairs and planning. “I don’t understand it.”

Unlike Gauthier, Lamothe didn’t have time to ask parliament for his clearance. He was ousted from office in December and parliament dissolved weeks later amid a political crisis. He only received his audits last month. But one of them, examining his tenure as planning minister, is negative, citing millions of dollars in expenditures that cannot be accounted for.

Lamothe has said he will appeal the findings and that while there were some “small irregularities,” they were minor compared to his overall management of funds. He said the electoral judges’ decision to block him, “is political.”

“They cannot just do one thing for one person and then give me a completely different decision,” he said. “It’s contrary to the principles of fairness and equity. It’s completely unjust and puts into question even the credibility of this council.”

Lamothe was once Martelly’s closest adviser and ally. But their relationship changed, Lamothe said, after accused kidnapping ring leader Woodly Ethéart, aka Sonson Lafamilia, was arrested under his watch as prime minister. A friend of Martelly’s brother-in-law, Lafamilia was released after a two-hour trial despite having been indicted on kidnapping , murder and other crimes by an investigative judge.

Lamothe said he isn’t asking for any special treatment, just fair treatment in the electoral process.

The final decision on who is allowed on the ballot of the scheduled Oct. 25 presidential elections is ultimately up to the nine member Provisional Electoral Council. After a similar judges’ panel accepted first lady Sophia Martelly’s senatorial candidacy, for example, an appeals panel overrode the decision and put her out of the race. The CEP also blocked former government ministers who didn’t have parliament clearance but had positive audits from entering the scheduled Aug. 9 legislative elections.

CEP President Pierre-Louis Opont said judges’ decisions “are made on the basis of the evidence submitted by the persons who produced the objections” to the candidate. He also added that “the electoral decree provides for the right to appeal.”