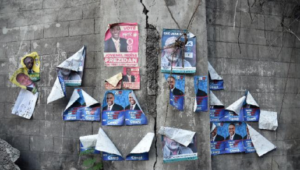 Port-au-Prince (AFP) – The legitimacy of the future Haitian president is already compromised two weeks before the vote gets underway, with a lackluster electoral campaign and a very low expected turnout.

The record number of candidates to lead the poorest country in the Americas in and of itself is a tell-tale sign of the weakness of the Haitian political fabric.

And the challenges awaiting the next leader are huge. About 170,000 victims of the January 2010 earthquake — which killed more than 200,000 people, are still living in makeshifts camps, nearly six years after the disaster that destroyed the capital.

About 60 percent of the population lives under the poverty threshold, and UNICEF worries that 40 percent of Haitians suffer from food insecurity.

“The political parties only exist when it’s time for elections, and the candidates are not mobilizing voters the way they should,” a foreign diplomat said, requesting anonymity in order to speak freely on the issue.

Among the 54 aspiring successors of Michel Martelly, most are unknown to the general public. Only a dozen candidates stand out, but not enough to generate significant voter enthusiasm.

“In the current environment, there is no warm welcome, no enthusiasm on the part of the people to discuss the elections,” said Marie-Yolene Gilles of the national human rights network. 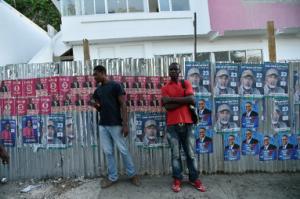 Among the 54 aspiring presidential candidates, most are unknown to the general public and only a doz …

“We keep saying we’re in a democracy, and elections must take place to renew the country’s political staff, but there the voters have no determination.”

Local media and professional associations try to organize debates to inform voters of the stakes at hand, but the main candidates rarely participate.

In this country of 10 million, the electoral campaign tends to be little more than a popularity contest.

Candidates who have raised the necessary funds to travel extensively organize parades around the time of Carnival to present themselves to the voters.

Posters of the candidates cover the walls in cities, but they rarely present their views and, when available, their political platforms lack details, including on such basic things as their proposed budget. 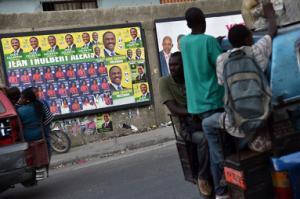 Haiti, which the World Bank says is one of the most unequal countries around the globe, lacks the ne …

“If you pay attention for just two minutes to most of the presidential candidates, you could easily think they come from Mars,” he said.

“How is it possible for Haiti’s presidential candidates to make such blunders on our country’s ability to finance extravagant projects they promise to deliver?”

Haiti, which the World Bank says is one of the most unequal countries around the globe, lacks the necessary revenues to finance the reforms promised by candidates.

In one example of how much the country depends on foreign aid, half of Haiti’s health expenses are financed by non-governmental organizations, according to the World Bank.

Those eking out a living in the informal economy and through ingenuity are disillusioned with the political world.

“They keep promising us jobs. But when they get elected, we just see them drive by in their big SUVs with their friends,” said Saint-Anne Dorleus, who has been selling fruit for the past 15 years on the streets of Port-au-Prince.

“For us the people, there’s no point to vote.”

Haiti’s first election since Michel Martelly came to power illustrated this major break between the majority of the population and the political elite.

During the first round of legislative elections in August, just 18 percent of voters cast their ballots.

Presidential elections usually see bigger participation, without ever being massive.

During the second round of presidential elections in 2011, less than a quarter of citizens made their voices heard at the polls.

The people are sick and tired of the “Classe Politique” a collection of people who couldn’t make a living elsewhere, and use their position,  to make money.

If elected Deputie or Senator, you can command a few hundred thousand American dollars for your vote on important issues.

Senate President Desras received $300,000 once, and bought his house in Fermathe with this.

If you become a Cabinet Minister, you have free rein over your ministry checking account.

If you are a close friend, of the President, like Valerie Milfort,  Thierry and Gregory Mayard-Paul you have unlimited possibilities to steal.

Haitians are realistic enough to recognize that corruption is a way of life – at all levels. However, there are – or should be – limits. Some, in the Martelly government have no limits and must pay the price – when the Martelly team departs.

Michel Martelly was elected by a mass of young people who don’t care for politics. They have no interest in the foreigners  addiction for democracy. They voted for Sweet Mickey – Michel Martelly, because he was one of them. Martelly understood/understands the people and has a real affection for them.

He made two promises, when elected: SECURITY and FREE EDUCATION.

Martelly has failed in both areas.

We are living in a war zone with drive-by killings of police officers a daily occurrence. People are shot and robbed, leaving banks. Home invasions happen, but are rarely reported.

SCHOOLING has become a sad, criminal fiasco. Miliions and millions have been stolen from the Ministry of Education, under Nesmy Manigat. YES – TENS OF MILLIONS USD!!!  Manigat must be arrested and face Justice, along with those who he has shared with!!!

PSUGO was a neat idea. A small fee from each money transfer from outside to Haiti.  Unfortunately, this huge pool of uncontrolled funds became a magnet. Within the first 6 months some $16,000,000 was siphoned off and paid to Senators and Deputies.  Hundreds of phantom schools were created.

HAITI’S CHILDREN – HAITI’S FUTURE HAVE BEEN CHEATED OUT OF THE PROMISED EDUCATION.

The Martelly Experiment was really the last gasp for a Democratic Concept in Haiti.  The young – under 24 – make up 54% of the voting population. They gave their support to Martelly – not Democracy, voting around 85% for him.

MOO MANIGAT probably got something like 15% in reality. Polls, before that election, showed her popularity at about 4.5%.

So, we have squandered an opportunity for Democracy’s survival.

Martelly really delivered the Coup des Grace when he refused a discharge to Laurent Lamothe. The people expected Lamothe to be their President. Lamothe is the most popular person in Haiti. The other candidates draw no interest. SO THE ELECTION WAS STILL BORN.

The lit of existing candidates, means nothing.

A record number of people would have voted for Laurent Lamothe.

Without Lamothe the turn out will mirror another 5% landslide.

And to guarantee failure, we have a wide selection of individuals, and groupings, dedicated to destruction of the electoral process.

The political parties, and candidate, who had/have absolutely no chance of winning anything, have now come out publicly demanding annulation of the process. They all want a Transitional Government – hoping to gain a place in this,

MOO MANIGAT wants to be President!

And the Martelly customs fiasco – blocking our border with the Dominican Republic – has brought other, shadowy forces, into our ongoing emergency.

The Dominican government has teams at work in Haiti.

Foreign economic interests (China, Spain, etc.) have pumped millions into the hands of some leading Lavalas figures so that – we are told – a number of people will be assassinated.

Some are planning a “Massacre” a price that will – of course – be paid by the poor Haitian majority. It will gain international headlines as peasants mourn their lost.

The election campaign has been a farce since no one expects an election.

John Kerry, American Secretary of State, has put his nose in, as have other foreign elements. They don’t have to live here.

MINUSTAH’s Honere has now disappeared from view since she declared the August 9 disaster as being 99.9% acceptable.

The American Embassy has also changed its tune.

All foreigners treat Haiti like a high school laboratory experiment. This time the chemicals have been misapplied and we are going to see a major explosion with many deaths.

A lengthy Transitional Government is not the answer.

We should see a solution in which we follow Article 149 of the 1987 Constitution. This sees a Supreme Court judge as Interim President with election held within 90 days.

Real observers for the actual vote and count, not foreigners paid a fortune to sit around the Marriott swimming pool, drinking rum punches on their astronomical per diem.

PNUD must lose control of the election funds.

Let’s print material in Haiti or Florida – not Dubai or South Africa.

OTHERWISE, LET’S ALLOW OUR BORLETTE TO SELECT A PRESIDENT. EVERYONE GETS A CHANCE AND THE GAM OF CHANCE WILL SELECT A PERSON OF THE PROPER AGE TO BE PRESIDENT.

MIGHT BE BETTER THAN SOMETHING DELIVERED BY STUFFED BALLOT BOXES!!

THE HAITIAN POPLE HAVE HAD ENOUGH!!!