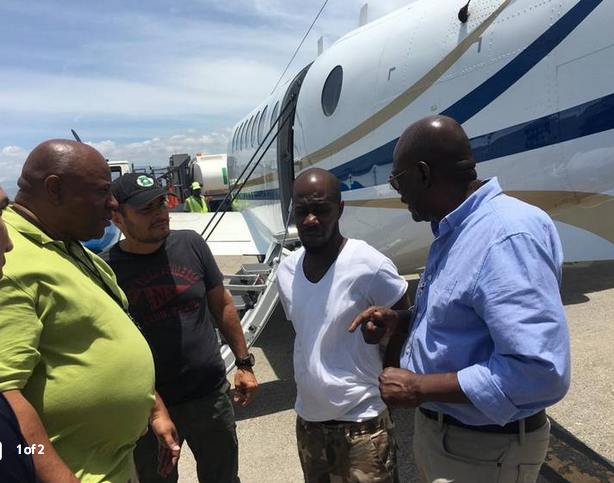 A key witness in a bungled U.S. narco-trafficking case that prompted the Justice Department to investigate allegations of wrongdoing by U.S. drug agents in Haiti has been extradited to South Florida to face charges himself as the sole defendant accused of conspiring to distribute cocaine and heroin.

George was indicted by a federal grand jury in Miami on April 30 on one count of conspiring to distribute multiple kilos of Colombian cocaine as well as heroin from July 2013 to June 7, 2015, knowing it would be imported into the United States.

The U.S. Attorney’s Office declined to comment. George is expected to have his first appearance in Miami federal court on Monday before a magistrate judge. His case is being prosecuted by Kurt Lukenheimer, the deputy chief of the office’s narcotics section.

The Miami Herald broke the story about the DOJ probe into the bungled DEA case in August of last year.

George, who was jailed in Haiti for three years before his extradition, is expected to play a central role in the widening investigation by the U.S. Attorney’s Office into the Panamanian-flagged MV Manzanares case. The boat arrived in Port-au-Prince from Colombia in April 2015 hauling bags of imported sugar and between 700 to 800 kilos of cocaine and 300 kilos of heroin with an estimated U.S. street value of $100 million.

In a previous interview with the Herald, George said there had been multiple attempts on his life while inside the Croix-des-Bouquets civil prison, where he was sometimes kept in isolation for his protection.

Sources familiar with his case say the most recent attempt on his life occurred over a week ago when he was beaten up inside the prison. They told the Herald that there have been at least a half dozen attempts on his life, including one where he was locked in a van and tear-gassed during an authorized transfer. The incident occurred the same day, Aug. 17, 2017, the Herald published its investigation into the DOJ’s probe.

While unloading the sugar from the Manzanares after its arrival in early April 2015, longshoremen stumbled across the hidden stash of drugs and a lawless free-for-all quickly unfolded. A host of people, including police officers assigned to Haiti’s National Palace and a judge, have been accused of grabbing the drugs. Also implicated was the former commander of Haiti’s anti-drug unit, Joris Mergelus. Mergelus was accused of taking bribes to hinder the investigation into the Manzanares case, which has become known as the “sugar boat” case. He has vehemently denied any links to drug traffickers.

Mergelus is also being accused of destroying evidence in the ongoing Manzanares drug smuggling investigation. Mergelus was removed from his post in 2017 by Haiti’s police chief, Michel-Ange Gédéon, and has since been assigned to a desk job at the Haiti National Police pending the outcome of an internal investigation.

The bungling of the sugar boat investigation came to light after two veteran DEA agents filed whistle-blower complaints, which triggered the DOJ’s investigation into the effectiveness of the DEA’s drug-fighting efforts in Haiti. An initial review by the Office of Special Counsel found “a substantial likelihood of wrongdoing,” in DEA’s Haiti office.

George allegedly was responsible for retrieving multiple kilos of cocaine and heroin from cargo vessels from Colombia that docked in Port-au-Prince. His nickname is Ti-Ketant, a nod to notorious Haitian cocaine kingpin Beaudouin “Jacques” Ketant, who had accused former President Jean-Bertrand Aristide of accepting drug-related bribes before having his 27-year sentence in a U.S. prison cut in half.

Of 16 individuals arrested by the Haiti National Police in the Manzanares case, only George remained in jail. He has come under fire from Haitian businessmen implicated in the case. They have accused him of lying.

Miami attorney Joel Hirschhorn, who represents a member of the Mevs family that owns Terminal Varreux, has said the port’s security was not loose, and drugs had not been smuggled through the port. The family even paid to build a police narcotics substation at the port in 2017, he said. But that was two years after the Manzanares incident.

Samantha Feinstein, a senior legal analyst with the Government Accountability Project, which represents federal employees with whistle-blower complaints, said it was not easy getting George out of Haiti alive. She credits one of the whistle-blower DEA agents but said he endured retaliation and blockade from within his own agency for helping George and keeping pressure on the Manzanares investigation.

“It is a miracle that Mr. George is alive after what he has been through and Government Accountability Project is pleased that he is now safe in U.S. custody and the Manzanares investigation has been preserved,” said Feinstein, who also credited the U.S. Ambassador in Haiti, Michele Sison, and U.S. Sen. Marco Rubio, R-Fla,for the latest developments. “We are talking about one of the biggest drug busts in Haiti and the only drug bust at the seaport in over a decade.”

Last summer, the DEA’s appointed special agent in charge of the Caribbean division, A.J. Collazo, downplayed the U.S. nexus in the case, telling the Herald the sugar boat case sounded to him like “something that was being prosecuted in Haiti and is going to end in Haiti.”

Feinstein said while she not only found the comment troubling, George’s indictment “demonstrates not only the merit of the nexus with the United States, but that the United States is committed to stopping the unobstructed flow of drugs through the Haitian seaport and it starts with investigating the Manzanares.”