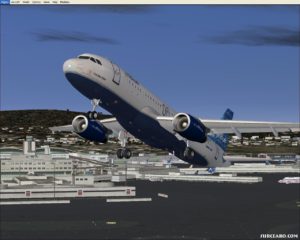 JetBlue is now flying to Haiti, the latest country in the carrier’s rapidly growing Caribbean network.

The airline began flights to the Haitian capital of Port-au-Prince last week, launching nonstop service from both New York JFK and Fort Lauderdale.

“We see great opportunities with our new service to Port-au-Prince,” JetBlue CEO Dave Barger says in a statement. “We look forward to bringing competitive fares along with our award-winning service to Haiti. With one-third of our network serving the Caribbean and Latin America, we are very pleased to add this important destination to our network.”

Officials from the Fort Lauderdale-Hollywood International Airport also lauded the new route by JetBlue, which has grown to become the airport’s busiest carrier. JetBlue carries about 18.5% of Fort Lauderdale’s passengers, enough to edge out Spirit (16.3%), Southwest (16.1%) and Delta (14.7%), according to federal data.

“This flight will be our ninth international destination, and it’ll actually make Fort Lauderdale-Hollywood the largest provider of air service to Haiti of any U.S. gateway,” Doug Webster, the airport’s deputy director aviation, says to the South Florida Sun Sentinel.

“JetBlue is our largest carrier here and we’re very, very excited by their continued growth,” Webster — the Fort Lauderdale aviation director — adds to the Sun Sentinel.

Many in impoverished Haiti have complained for years that flights from Port-au-Prince to the United States are too expensive. Part of the fees stem from taxes that are collected by the Haitian government.

The carrier began daily service to Lima from Fort Lauderdale on Nov. 21.

“Latin America is a strong, growing market for us, and we’re excited to extend our presence in South America by adding Peru to the JetBlue network,” Robin Hayes, JetBlue’s chief commercial officer, said in a statement ahead of the launch. “Customers in South Florida now have more options on JetBlue for a great experience at a lower price point. Lima is one of South America’s main business capitals and also one of the continent’s most exciting tourist destinations.”