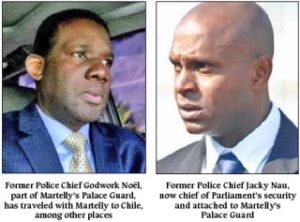 Mario Andresol’s term as Chief of the National Police (PNH) is about to end.

It is time for Andresol to step down and let a new and fresh leader take his place.

Andresol was originally the American’s choice, forced upon the Haitian scene, without any real review of the man’s actual background, which would have  made him unacceptable in any other society. He was called Haiti’s “Serpico” as a suggestion that he followed the legendary New York detective’s pursuit of any and all criminals, no matter who they might be attached to in the political scheme of things. Andresol did attack a group of cocaine traffickers but these were simply those in competition with Aristide’s team.  In other words, Andresol created a great arrest record while removing the competition.

All of that is in the past.

His tour of duty, as Police Chief, has reached a point where his ego is beginning to overshadow his obligations to the Haitian community. Andresol is seen roaring around the countryside in a caravan of armored vehicles, accompanied by 50 motorcycles – sirens wailing – like some Head of State.

Indeed, Andresol has become too big for his shoes, as the saying goes..

A number of possible replacements have been suggested including, if you can believe it, Lubin, one of Aristide’s hit men, involved in the assassination of Mireille Durocher-Bertin – on the orders of Aristide/Preval, in March of 1995.

There are no rivals for  Jesus Christ, among  Haiti’s population. Everyone has character flaws, some greater than an others. The purist members, of our society, could never function in the rough and tumble world of Haitian reality.

The choice of a new police chief is a key foundation piece for survival of the Martelly government, and Haitian society.

Some have put forward the name of Jackie Nau, a key member of the PNH, during the Aristide presidency. Nau was the respected head of the PNH Delmas sector and was looked to – for leadership – by many other senior members of the overall force, at that time.

He served the Haitian community well.

When Aristide ordered an attack on polling stations, during the 2000 general election, Nau, and other police leaders refused and fled to the Dominican Republic to escape the predictable retribution, of an irritated President.

Jackie Nau was, and is a respected member of Haitian society and retains the loyalty of many serving PNH members. In our opinion, the International Community, especially the American and Canadian embassies, should look at Nau’s positive attributes and overlook what they refer to as his “political involvement” during the Aristide chaos.

The PNH is at a point where a new and fresh leadership is a must, if it is to survive and function effectively during the coming years.