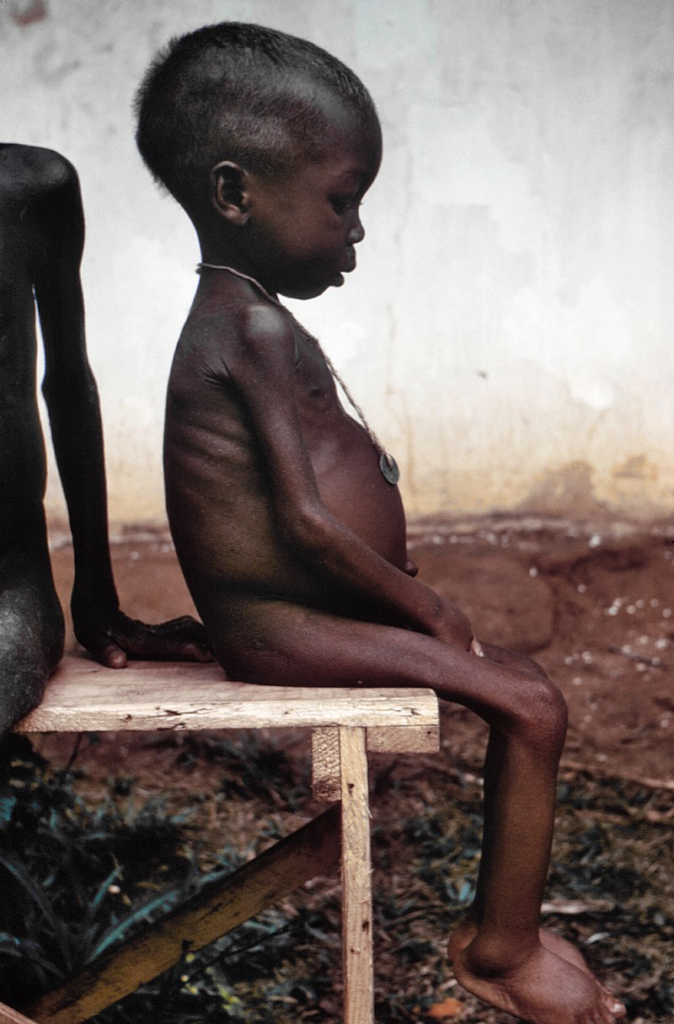 AS seen in TIME news

As global mass vaccination against COVID-19 begins, it’s one thing to live in a place like the United States, which has the financial and geopolitical resources to secure what will likely be more than enough doses for its entire population. It’s quite another to live somewhere without those resources—somewhere like the Ivory Coast, also called Côte d’Ivoire, a West African country that ranks 133rd by GDP per capita.

It was clear even before any COVID-19 vaccines were approved that countries like the Ivory Coast would need help securing doses when they became available. There’s the moral imperative, of course—nobody should be denied access to a life-saving vaccine because of where they live. But there’s also a global public health incentive at work, as countries that don’t get their outbreaks under control may become breeding grounds for new variants that could then spark fresh regional or even worldwide outbreaks.

Enter programs like COVAX, an initiative led by GAVI, the World Health Organization and others that’s working to “ensure fair access to vaccines in countries around the world,” as my colleague Jamie Ducharme puts it. Those behind the effort had something to celebrate today, Jamie reports, as front line workers and public officials in the Ivory Coast became the first people to be inoculated with vaccines sent by COVAX.

“This is an important step in our shared fight against the common enemy that is COVID-19,” Ivorian minister of health and public hygiene Dr. Eugène Aka Aouélé said in a statement after the vaccines arrived. The country received 500,000 Indian-made doses of the AstraZeneca-Oxford University vaccine, which were transported there by UNICEF.

COVAX has plenty of work ahead of it—it wants to deliver 2 billion doses by the end of this year, and while you’ve gotta start somewhere, 500,000 is just a drop in the bucket compared to that ambitious figure. In part, the problem is that COVAX is competing with major global powers for a limited number of doses, and any world leaders who help fund the group invite criticism that they’re putting other country’s populations ahead of their own. Still, at least some help recently arrived in the form of $2 billion from the U.S., where President Joe Biden has reversed his predecessor’s decision not to fund the project (Biden has pledged another $2 billion as well, but the U.S. still ranks behind Norway, Germany and the U.K. in terms of funding per capita). If successful, COVAX will become another pandemic-era reminder that, when a sense of urgency draws us together to solve a hard problem, humanity can be pretty dang impressive. The real trick will be continuing that work even after the coronavirus outbreak ebbs—many of the world’s countries need help fighting not just other pathogens like Ebola and malaria, but with issues like food insecurity, climate change and more. Those of us in wealthy parts of the world shouldn’t turn our backs on those needs just because they don’t seem to pose an immediate threat to us.

More than 96.4 million doses of the COVID-19 vaccine have been shipped to various U.S. states as of this morning, of which 75.2 million doses have been administered thus far, according to TIME’s vaccine tracker. Approximately 15% of the overall U.S. population has received at least one dose, and about 7.5% of Americans have gotten both doses.

Player three has joined the fight: Johnson & Johnson’s COVID-19 vaccine received emergency use authorization from the U.S. Food and Drug Administration over the weekend, making it the third such inoculation to get the thumbs-up for use in the States. While it’s less effective in preventing all symptoms than the Moderna or Pfizer-BioNTech vaccines, it’s still very effective in preventing major symptoms—plus it’s easier to store and transport, and only requires one dose rather than two. J&J expects to deliver 20 million doses to the U.S. by the end of this month, and 100 million by summertime—numbers that are twice as big as they might seem if you’re used to looking at shipment data for the two-dose shots.

Administration of second doses in the U.S. has outpaced that of first doses for the last several days, according to TIME’s analysis of government data. It’s unclear what’s driving that phenomenon, but it could be a sign that it’s time to open eligibility to more groups so more people can get their first dose—especially as another vaccine gets FDA authorization and mounting evidence suggests that even one dose of the two-dose vaccines can confer some protection and reduce spread.

During a meeting between the two leaders today, Reuters reports that Mexican President Andres Manuel Lopez Obrador is expected to ask U.S. President Joe Biden to effectively loan vaccine doses to his country, where mass vaccination is off to a sluggish start. Mexico has ordered 211 million doses, per Bloomberg, but many of those shipments have been delayed; the country has vaccinated only about 1.4% of its nearly 128 million residents. It’s unclear how Biden will respond, but speeding up vaccination efforts in Mexican cities along the U.S. border, like Ciudad Juárez, could help reduce spread in closely-linked American cities, like El Paso.

Here’s how the world as a whole is currently trending: 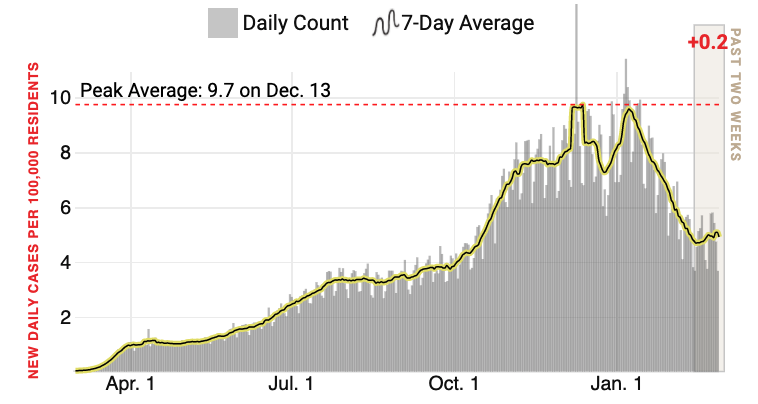 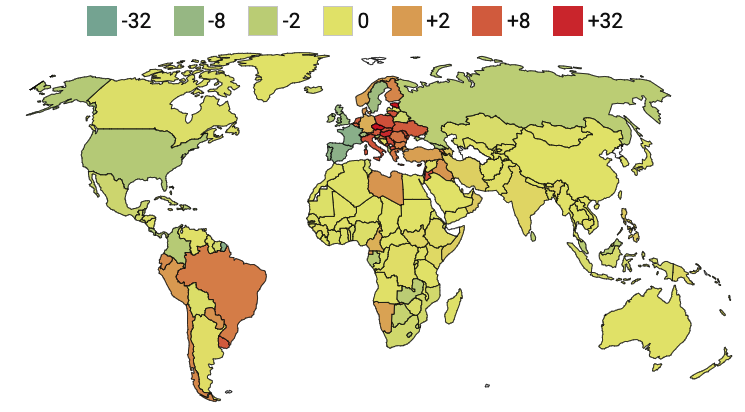 And here is every country with over 2 million confirmed cases: 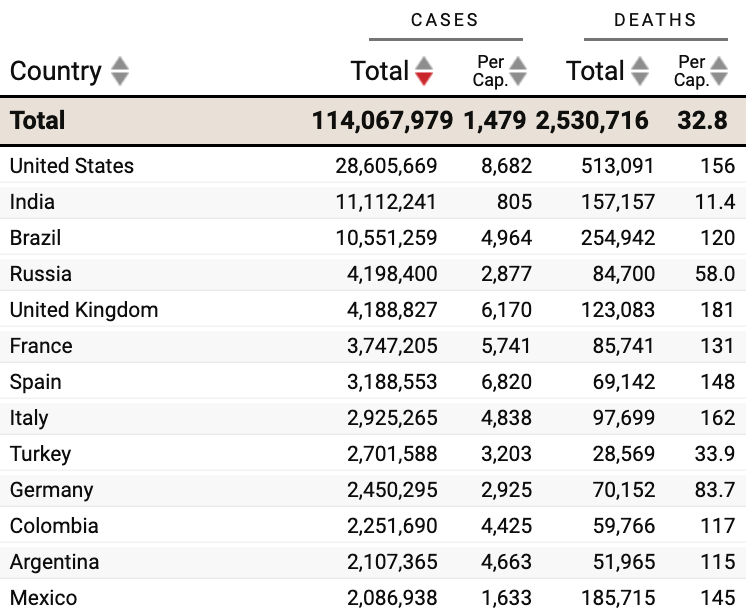 Indian Prime Minister Narendra Modi received his first shot of the domestically-created COVAXIN vaccine this morning, Reuters reports, as the country expanded eligibility to all those above 60 or above 45 with comorbidities. “I appeal to all those who are eligible to take the vaccine,” Modi wrote on Twitter, where he also shared a photo of himself getting the jab. That Modi opted for the home-grown coronavirus vaccine may instill confidence in the product—only about 11% of vaccine recipients in India have picked the COVAXIN vaccine over the AstraZeneca version, per Reuters, the only other shot available in the country so far.

European leaders are set to propose a “digital green pass” that could allow those who have been inoculated against COVID-19 to more freely travel across the continent. Non-vaccinated people could also use such a passport to show they recently had a negative test. “The aim is to gradually enable [people] to move safely in the European Union or abroad—for work or tourism,” European Commission President Ursula von der Leyen said today. Any such pass would have to comply with Europe’s strict data privacy rules.

Residents of Auckland, New Zealand are back in lockdown this morning after a single new COVID-19 case was reported in the area, Reuters reports. While the country’s aggressive response to comparatively small micro-outbreaks has helped it stay nearly coronavirus-free, some locals are getting fed up with the continued on-again, off-again lockdowns, which take both an economic and mental health toll.

The Situation in the U.S. 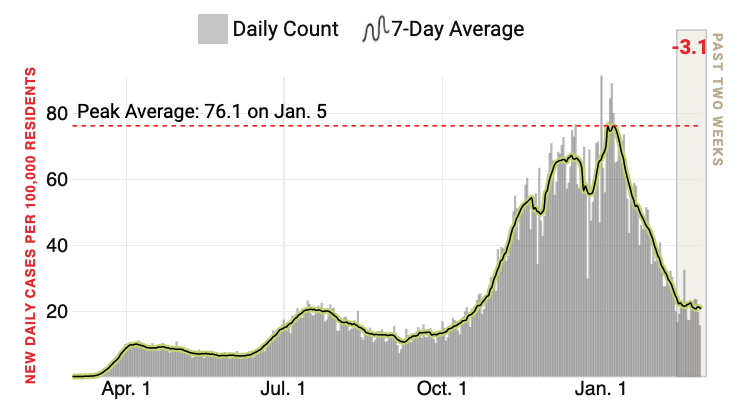 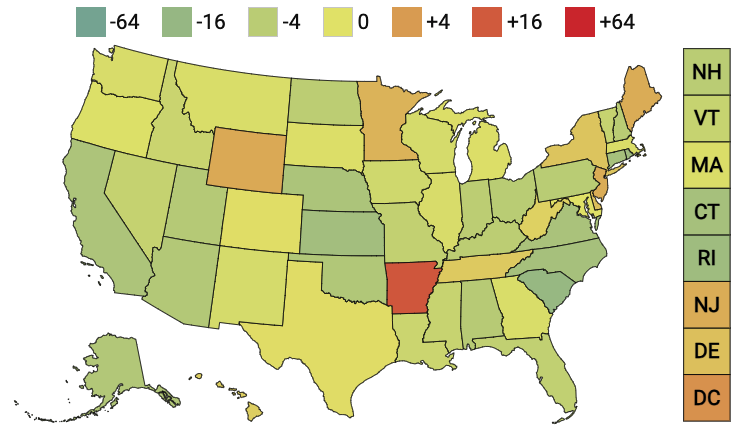 Researchers have discovered every known major coronavirus variant in samples collected from people in Houston, Texas, the Houston Methodist hospital (which led the project) recently announced; a more detailed pre-print study is set to be published soon. The results suggest that many variants are spreading in at least some parts of the U.S., but may be going relatively undetected due to inadequate genetic sequencing.

Over the weekend, the House approved Joe Biden’s $1.9 trillion pandemic relief bill, which will be taken up this week in the Senate, where it’s likely to undergo some changes before advancing further. While the bill will almost definitely include another round of direct relief checks of up to $1,400, people making more money may get even less than they previously did this time around. Furthermore, the bill’s proposed increase in the federal minimum wage to $15 is unlikely to make it through the Senate, mostly due to parliamentary rules governing the process Democrats are using to prevent the entire package from being filibustered by Republicans.

All numbers unless otherwise specified are from the Johns Hopkins University Center for Systems Science and Engineering, and are accurate as of March 1, 1 a.m. E.T. To see larger, interactive versions of these maps and charts, click here.