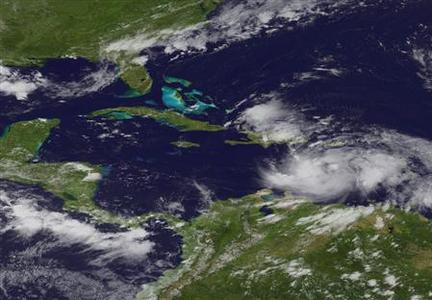 (Reuters) – Tropical Storm Isaac strengthened on Friday as it took aim at flood-prone Haiti, but it was not expected to become a hurricane until it barreled into the Gulf of Mexico early next week.

On its current path, forecasters said the storm would hit Cuba and the southern tip of Florida before possibly making landfall anywhere from the Florida Panhandle in the northwest of the state or Alabama to as far west as New Orleans.

Gulf of Mexico operators began shutting down offshore oil and gas rigs on Friday ahead of the storm. London-based BP Plc, the biggest Gulf producer, said it would shut down its giant Thunder Horse platform, the world’s largest, and Royal Dutch Shell said it would evacuate support personnel from its Gulf platforms.

Other offshore drillers are likely to shut production in coming days as the storm approaches.

But while uncertainty hung over where the storm might make landfall, Isaac posed a clear and present danger to heavily deforested Haiti, where the U.S. National Hurricane Center (NHC) said the full force of the storm was expected to be felt on Friday night.

Heavy dark clouds swept over the Haitian capital Port-au-Prince early Friday afternoon, bringing the first rain from Isaac to the dusty, sun-baked streets of the crowded and chaotic capital.

Flash-flooding and mudslides, which are common in Haiti, could add to the misery of about 350,000 people still living in tent cities and camps after the January 2010 earthquake that killed more than 250,000 people in the poorest country in the Americas.

The storm was moving northwest at 14 mph, and some additional strengthening was possible before Isaac’s center passed near or over Haiti on Friday night.

Isaac was expected to dump between 8 and 12 inches of rain over parts of Haiti, and the NHC said total accumulations of up to 20 inches were expected in some areas.

“We’ve been through several storms in the past year. Everyone should stay cool. Keep a cool head,” Haitian Prime Minister Laurent Lamothe said on Thursday.

“NOTHING WE CAN DO”

But his appeal for calm only seemed to fuel a sense of resignation among many Haitians in the face of the storm.

The Haitian government has 1,250 designated “safe spaces,” schools or other community buildings scattered across the country to house people seeking shelter from the storm. It also has a fleet of about 225 buses on call for any needed evacuations, authorities said.

Red Cross officials said the number of shelters could be grossly inadequate, and Lamothe acknowledged that the government had “limited means” to ensure public safety.

“We live under tents. If there’s too much rain and wind, water comes in. There’s nothing we can do,” said Nicholas Absolouis, an unemployed 34-year-old mechanic in a camp for homeless people on the northern edge of the chaotic capital, which with its suburbs has two to three million people.

“If he’s coming, he’s already on the way,” added Juliette Jean-Baptiste, 26, another resident of the camp. “Our tents leak already.”

“The next 24 hours will be critical for the population of Haiti,” said France Hurtubise of the International Federation of Red Cross and Red Crescent Societies in Haiti. “There are still too many people living in the camps. There’s a good chance that those might be destroyed with the passage of the cyclone.”

Flooding could also help rekindle a cholera epidemic in Haiti, which has killed more than 7,500 people since the disease first appeared in October 2010, foreign aid workers said.

Isaac has drawn especially close scrutiny because the Republican Party’s convention begins on Monday in Tampa on Florida’s Gulf coast.

So far, there are no plans to postpone the four-day convention, when former Massachusetts Governor Mitt Romney will receive the party’s presidential nomination.

The NHC is no longer forecasting Isaac to rev up to hurricane force until long after it crosses Haiti. But NHC meteorologist Rick Danielson said it was very difficult to determine the intensity or extent of Isaac’s possible impact until the storm emerges from its projected passage over mountainous Cuba on Saturday and Sunday and enters the Florida Straits.

Danielson said the Florida Keys, the island chain off the southernmost part of the state, were highly vulnerable.

Tampa, on Florida’s central Gulf Coast, is still in the NHC’s “cone of uncertainty.” That’s the area that could feel the full force of Isaac, as it ramps up to projected hurricane force on Tuesday.

Danielson said the threat to Tampa was hard to gauge but it could potentially be hit by coastal flooding and driving winds or rain. “There is still a full range of possible impacts on Tampa at this point,” he told Reuters.

Florida has not been hit by a major hurricane since 2005, and forecasts showed Isaac was not expected to strengthen beyond a weak Category 1, with top sustained wind speeds of about 85 mph.

The NHC’s Danielson stressed that the storm was quite large, however, and said it could affect Gulf Coast residents as far west as Texas.

Forecasters at Weather Insight, an arm of Thomson Reuters, still give the storm a 50 percent chance of entering the heart of the oil- and gas-producing region.

If Isaac stays on the track projected by forecasters, it will skirt the eastern edge of the U.S. offshore oil production area, which produces about 20 percent of U.S. oil supply and 6 percent of its natural gas supply. However, oil traders said that a westward shift in Isaac’s track could bring it into the heart of the offshore oil patch and spur significant supply disruptions.

(Writing by Tom Brown. Additional reporting by David Adams in Miami, and Kristen Hays in Houston, editing by Philip Barbara)