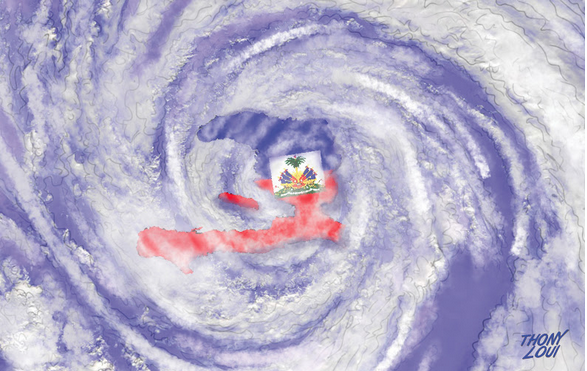 Although there is a return to normalcy in Haiti following last year’s protests and national lockdown, it feels like the calm at the center of a tropical storm. The issues that led to the lockdown constitute the outer ring of the storm because they remain unresolved. But for the moment they are being held at bay and an inner circle of calm has resulted in a collective sigh of relief throughout the country. Children are able to go to school again, business and community life is back to its usual rhythm, and you can move around freely. Yes, there are some places where armed gangs are still active, but they are largely confined to specific roads and neighborhoods that locals monitor via the social media equivalent of the Waze app.

The big question is how long will the calm center hold before the political storm takes hold again? And here I would make a distinction between the big ongoing systemic challenges facing Haiti and the flashpoint actions that have the potential to either defuse or ignite the situation.
The big underlying challenges include a core level of poverty, inequality, lack of education, and deforestation-linked climate change that continue to weigh down the population and hold the country back. On top of this is layered a new era of detailed exposure of government corruption, serious food shortages that are leading to malnutrition, a 38 percent depreciation of the gourde against the US dollar in the past year, and questions around the future of state-subsidized fuel.
Standing in the temporarily calm center of this political storm is President Jovenel Moïse, now ruling by decree because scheduled legislative elections were not held last year. He has announced three major initiatives that include forming a “unity” government, adopting a new constitution and holding elections. How and if these are implemented represent three flashpoints with the potential to either mollify or exacerbate Haiti’s political storm.
The most pressing action facing the president is to appoint an interim unity government to replace the lapsed parliament. It will need to include representatives from the opposition, although the most outspoken figures have so far refused to come to the table. President Moïse is also reaching out to other sectors for inclusion, but to date there is no announcement of this necessary but stopgap measure.
Overhauling the constitution has considerable support in Haiti, although it is not without controversy. The current version, adopted in 1987, weakened the presidency in response to the abuses of the 30-year Duvalier family dictatorship. Included were provisions barring a president from holding two consecutive terms in office. Many see government corruption as being at least partially facilitated by too much power being diverted to other branches at the expense of the presidency. But drafting a new constitution and getting it adopted via some form of national referendum, in the midst of of the current political uncertainty, seems daunting at best.
The third flashpoint is around holding new elections for the full slate of deputies and the majority of senators whose terms lapsed because last year parliament failed to pass the electoral law needed for holding these elections.
One school of thought says a new constitution needs to be in place before the elections are held, while others question the legitimacy of a new constitution taking shape without a fully functioning elected government to guide that process.
Haiti has not been able to pay for its own elections for some time, and so while people rankle at the thought of foreign intervention, the reality is that both a constitutional referendum and national elections can only take place with funding from international institutions and the governments of the US, Canada, France and others. This also means that, like it or not, these same outside agents will have a say in the election vs constitutional referendum debate. And at the moment that external pressure is lined up in support of elections as a priority.
Back to the armed gangs mentioned earlier. While they are not controlling the streets as they did during the lockdown, they are still a reality. Any plan for an election or constitutional referendum needs to address, as an absolute priority, the potential emergence of gangs form the shadows to interfere in the voting process.
The final wildcard in all of this is the possibility of a full-scale food crisis starting in March. This month FAO published its Early Warning Early Action (EWEA) Report on Food Security and Agriculture, and on page 8 they warn that in Haiti, “4.1 million people (40 percent of the total population) are projected to be severely food insecure during the period going from March to June 2020…” The reasons given are dry conditions that affected the 2018/19 main crop season along with last year’s protracted political instability. Also cited is the impact of rising staple food prices, with annual food inflation at approximately 22.6 percent.
It is worth keeping in mind that the global food crisis of 2008, while the circumstances were different, led to massive public protests in Haiti that were eerily similar to those of last year.
So, is this enough bad news?

I am a resolute optimist about Haiti’s future, but I feel I can only share that optimism after first acknowledging the current reality. I shared some of my reasons for optimism in the recent Voices of Hope for Haiti’s Future. Let me add one more positive story to that collection with news that the University Hospital, operated by Partners in Health in Mirebalais, has just received global accreditation for meeting the highest international standards as a teaching institution.

Ultimately my Haitian brand of optimism is a direct result of the success of the Smallholder Farmers Alliance and our tree currency model. We have seen significant increases in farmer yields and income, while these same farmers have planted more than 7.5 million trees to date. We are in the process of significantly expanding our footprint in Haiti to begin enlisting more farmers through partnerships that include Timberland and the Raising Haiti Foundation, along with input from the Ministries of Agriculture and Environment.
The potential impact? FAO statistics say it best: more than half of Haiti’s 11 million people live in rural areas, and around 85 percent of them are engaged in agriculture. Farming accounts for around 26 percent of Haiti’s economic output, making agriculture by far the country’s biggest employer.
Increasing agricultural output and planting trees can only be beneficial for the country, even more so if they are combined through tree currency.
And of course, your donations contribute to our capacity to do more!
Regards,
Hugh Locke
President, Smallholder Farmers Alliance + Impact Farming