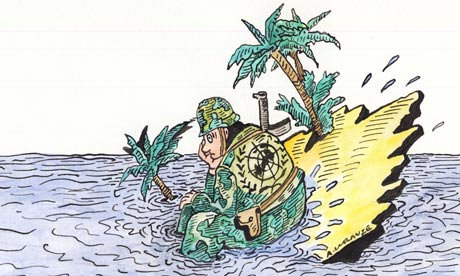 ‘Nearly three times as many have died as were killed in 9/11, yet there are no urgent debates at the general assembly.’ Illustration by Andrzej Krauze

Imagine if a multinational company went to one of the world’s most impoverished countries and, while saying it was there to help, contaminated the water supplies, unleashing a new disease that killed thousands of people. Hundreds of thousands more develop a hideous sickness, suffering such debilitating loss of liquid their eyes sink into their face, their skin wrinkles, their body shivers uncontrollably. Then there is a cover-up as the firm evades responsibility and, when finally taken to court, it simply refuses to play ball with the legal process.

Such a story sounds like something created in the febrile mind of a Hollywood scriptwriter, which in real life would lead to a huge and justified outcry. But this is precisely what has just happened to the people of Haiti, except with one big difference – it was the United Nations at the centre of events, not a multinational. And there was no furore, just a few murmurings of mild concern.

Yet such behaviour is worse coming from the body that is supposed to serve as the conscience of the world rather than a profit-hungry firm. The UN purports to exist in order to guard human rights, to spread the rule of law, help the poor and defend them from conflict and disease. It has all too often fallen woefully short of these noble ideals, but rarely has it shown such willful contempt for them in its own actions.

Consider the facts. In 2010, UN peacekeepers went to Haiti to protect stability and prevent the spread of disease following a devastating earthquake. Instead, Nepalese soldiers almost certainly imported cholera, a condition not seen in the country for more than a century, then spread it by dumping sewage into a river. More than 8,000 Haitians have died so far, with another 647,000 people infected, yet from the start media and public health investigators met obfuscation from officials.

The UN refuses to take responsibility for events, yet even its own panel of international experts implicated the organisation and Bill Clinton, its special envoy for Haiti, accepted that peacekeepers caused the outbreak. Haitian victims filed for compensation – but at the end of last month, in one more cruel blow against this blighted country, it hid behind diplomatic immunity to reject their request for redress. About one in 15 Haitians have been affected by the outbreak; if similar numbers were infected here, we would be looking at about four million cases. But Ban Ki-moon, the UN the secretary general, called the Haitian president to say his organisation was using a 67-year-old convention to avoid paying redress.

This is an institution that when it sends troops on missions accompanies them with lawyers to sort out minor compensation claims, such as traffic accidents involving its vehicles, or the odd roof blown off by helicopters. Yet, by invoking immunity in this weaselly manner and using the cloak of a convention designed to prevent harassment from security forces in unstable zones, it is behaving more like a dictator’s son refusing to pay parking tickets than an international body meant to show moral leadership.

The lawyer leading the case is Brian Concannon, director of the Institute for Justice and Democracy in Haiti. We met in his office in Port-au-Prince just after he filed the case, alleging UN negligence for failing to screen soldiers coming from a known cholera zone and disposing of waste in Haiti’s main water system. This weekend, after 15 months awaiting the response while the epidemic ripped across the country, he told me he was disappointed rather than surprised by the decision. Concannon used to work for the body as a human rights officer – and as he rightly says, how could he now go into tense areas arguing for the establishment of the rule of law when the UN itself evades legal statutes in this way?

The decision to hide behind section 29 of the 1946 Convention on UN Privileges and Immunities was explained to him in a two-page letter, which expressed condolences for the catastrophe and claimed the secretary general was saddened by events. “The cholera outbreak was not only an enormous national disaster, but was also a painful reminder of Haiti’s vulnerability,” it added. This is true – cholera is comparatively simple to treat and could have been contained in a more prosperous place. But this only underlines the scandal of its refusal to admit culpability and compensate those affected.

Few nations have suffered as much in their history as Haiti from the actions of outsiders. This avoidable epidemic, which is still killing scores of people each month, is the latest tragedy. Nearly three times as many people have died as were slaughtered in the 9/11 attacks – yet rather than urgent debates at the general assembly, the UN ducks responsibility in denial of the ideals set out in its own charter. The cost of compensation would be less than one year’s peacekeeping in Haiti. Instead, there has been no apology, no admission of guilt and now no restitution for people who have surely suffered enough already.