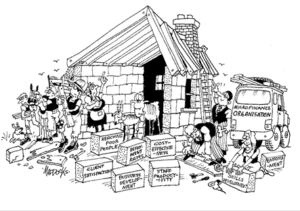 Microfinance organizations are working to lift Haiti out of poverty one tiny loan at a time.

CABARET, Haiti — Ask Clanise Paul how to spell her name, and the talkative 27 year-old pauses for a moment before explaining she can’t read or write.

But ask her how she operates her business, and she doesn’t hesitate to explain the intricate details of how before the January earthquake, she made a hefty profit by selling juice and other food on the side of the road.

Paul is also like many who lost everything in the earthquake — not just her house, but also her merchandise.

But unlike many merchants, Paul has help. Because she had borrowed money from microfinance organization Fonkoze, not only will her initial loan be forgiven, but she is also receiving a small cash infusion to help in the short-term.

Small merchants like Paul, called ti machann, make up the backbone of an economy where 80 percent of commerce comes from self-employment.

Recapitalization of these people, especially in rural areas where formal banking opportunities are limited, is a critical part of rebuilding Haiti’s economy, said Leonie Hermantin, the Miami-based deputy director of The Lambi Fund, a nonprofit that focuses on economic justice in Haiti.

“We have the newcomers who also need to have a source of income, the farmers, the merchants who now really have to find a way to make money, because they have in some households, 10 more mouths to feed,” said Hermantin, referring to the many who fled Port-au-Prince to the countryside following the Jan. 12 earthquake.

It’s been four years since Bangladeshi economist Muhammad Yunus and the Grameen Bank won the Nobel Peace Prize for three decades of work fighting poverty through microcredit. When the Nobel Committee hailed their efforts to “to create economic and social development from below,” it also thrust a global spotlight on microlending, which focuses on tiny loans, anywhere from $50 to several thousands dollars, mostly to the poor in rural areas.

Organizations like Fonkoze, founded in 1994, follow similar principles of microlending in Haiti: loans, which range from $25 to as high as $25,000, come with literacy and financial training. Much of its lending is to groups, not individuals, and mostly to rural women. But commercial banking institutions in Haiti, including the country’s largest banks, also have for-profit microfinance arms that function in a similar fashion to traditional larger loans.

Industry experts say they see the earthquake is as an opportunity for all types of microfinance institutions to expand throughout the country. They estimate that just 10 percent of the available pool of loan clients are being reached right now. But first, the banking institutions themselves also have to be strengthened, as they struggle to recover loan portfolios facing unprecedented damage because of not just lost property, but even clients who may have died.

STAIRCASE OUT OF POVERTY

Fonkoze is the largest microfinance organization in Haiti, as measured by the number of its clients, who are spread primarily outside of Port-au-Prince in the countryside.

Like the Grameen Bank, nonprofit Fonkoze describes itself as the bank of Haiti’s poor: It has 200,000 saving accounts as well as 45,000 loans, and has just also help launch a new pilot website, Zafèn, which it hopes will connect especially the Haitian Diaspora directly to business owners in Haiti who are looking for loans.

“We believe there is a staircase out of poverty,” said director Anne Hastings, inside Fonkoze’s new temporary headquarters in Port-au-Prince. The bank’s permanent headquarters were destroyed by the earthquake, along with several other branches, including at the earthquake’s epicenter in Leogande, where Fonkoze brought in a mobile unit to provide banking.

One of the main walls inside the branch at Cabaret, just outside of Port-au-Prince, has a huge crack. Workers strung up tarps and took their laptops outside where clients like Paul are being served.

“I started working with Fonkoze to get a little bit of money,” said Paul, as she stood outside near one of the tarps.

Paul was describing the bank’s first-tier loan program, which they call Ti Kredi, or little credit, loans as small as $25. She eventually moved into the second tier, forming a group with other women who manage a $1,000 loan together. Those groups meet regularly for literacy and business training.

Since the earthquake Fonkoze has focused, as Hastings said, on getting its clients back on the staircase.

For years Fonkoze has partnered with Haiti’s Alternative Insurance Company to also offer microinsurance in each loan, so if that the loan holder dies, not only is the loan forgiven, but the family is given a small indemnity to help with funeral costs.

The two were about to introduce a catastrophic microinsurance program just before the earthquake. They decided they would treat all of Fonkoze’s loan clients as if they were enrolled in the program, resulting in 17,000 loan clients affected by the earthquake having their loans forgiven. Clients also received a 5,000 gourde ($128) indemnity.

“I think insurance is there to improve the quality of lives of individuals,” said AIC President Olivier Barrau, who started the microinsurance program with Fonkoze in 2007, and said it is designed to help educate all Haitians, who are chronically underinsured, about how insurance should be not just a financial, but social tool.

Hastings said the insurance, literacy and financial tools are all part of their goal of lifting people out of poverty.

“We’re really trying as hard as we can to educate clients that if you stay in Haiti, you need to have insurance because everything you have can be wiped out overnight,” said Hastings.

Six weeks after the earthquake, Septus Rodrigue was one of the first in line at the Sogesol bank in Pétionville, Haiti, the first week the bank was open to talk to microlending clients about refinancing their loans. Rodrigue, a barber who owns his own shop a few miles from the Sogesol Pétionville office, has gone through several microloans, not just with Sogesol, but with institutions as well.

His shop didn’t sustain much physical damage from the earthquake, but he worries that many of his clients have died, so he came in to talk to a loan officer about what he owes.

Rodrigue is one of 13,000 Sogesol clients who have loans ranging from $50 to $20,000. In all, Sogesol’s loan portfolio is about $12.5 million, the biggest of any microloan portfolio in Haiti.

Sogesol is the microfinance affiliate of Haiti’s largest and oldest locally-owned bank, Sogebank. Like Fonkoze, immediately after the earthquake, Pierre Marie Boisson, Sogesol’s chairman, swung into action, issuing a recovery document they shared with partners.

“It said two things,” said Boisson, who based the document on past experience of loan recovery in previous disasters like last year’s floods in Gonaives. “We estimate we will have some of our clients die, or leave Port-au-Prince. But we’ll have a significant portion of clientele that will remain but be traumatized. We need to refinance those guys quickly.”

Sogesol has since managed to refinance 90 percent of their clients who were affected by the earthquake. Two Sogesol employees died in the earthquake, but Boisson said the organization has been amazed that it seems just a small percentage of their loan clients have died.

Boisson, who is on Haiti’s Central Bank Board of Governors, has helped the central bank come up with a guarantee fund, which will be funded by the Inter-American Development Bank, that will take on some of the risk to credit extended by banks after the earthquake.

The IDB has also been working to establish a mechanism similar to what the United States did to take over the troubled assets U.S. banks were holding in subprime loans.

Like many Haitian institutions, microfinance organizations before the earthquake were in a good place — stabilized, and many growing, said Fernando Campero, a senior financial specialist with FOMIN, a multilateral investment fund, grant and loan facility and the part of the IDB which deals with microfinance institutions.

“They provided an important role, I think, because the banking sector was much more concentrated on the higher sector of the economy, more corporate lending,” Campero said.

But the earthquake in Haiti is unprecedented for the size and scope of the damage to microfinance loan portfolios across the country, Campero said.

“This is far beyond anything we have seen,” said Campero. “In other crises, you see institutions affected because they are located in just a region.”

HELP ON THE WAY

Five years ago, FOMIN helped start an Emergency Liquidity Facility that helps prequalified microfinance institutions in developing countries deal with external shocks such as natural disasters or political crises. Most recently, the facility had been helping with the global financial crisis.

The $7 million to $8 million fund, being created right now, plans to buy the parts of Haitian microloan portfolios that are likely to be delinquent because of the earthquake, and spend three years working with clients to try to collect on the loans.

That way the Haitian institutions can concentrate on growing their base, said Juan Carlos Perreira, whose Costa Rican-based company, Omtrix, manages the emergency liquidity facility.

“You have a very large potential for microfinance in Haiti,” said Perreira, who will also manage HELP. “But the first thing we have to do is make sure these institutions continue operating — to clean that balance sheet, and provide funding so they can continue with clients. That’s what will really make a difference with those people out here who have lost everything.”

1 thought on “In Haiti, small loans make a big impact”