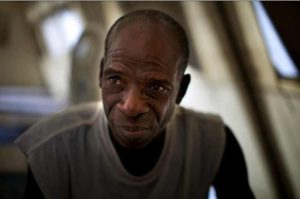 A hundred thousand people in Haiti are ready and waiting to get vaccinated against cholera.

The vaccine is sitting in coolers. Vaccination teams are all trained. Willing recipients are registered and entered into databases.

The impending mass vaccination project aims to show that vaccinating against cholera is feasible in Haiti. It has never been done in the midst of an ongoing cholera epidemic. So far, more than 530,000 Haitians have fallen ill with cholera, and more than 7,000 have died.

But the vaccination campaign is bogged down in bureaucratic red tape.

Meanwhile, the spring rains are beginning. Cholera cases are starting to climb, because the floods spread the cholera bacterium around.

Rouzier works with GHESKIO, a Haitian medical group that is organizing the vaccination project in Port-au-Prince, Haiti’s capital. The rural arm is sponsored by Partners in Health in the Artibonite River valley, where cholera first appeared.

The two groups have been planning the demonstration project for more than a year.

Initially it was opposed by a previous Haitian government, in part because international agencies such as the World Health Organization and Pan American Health Organization were against it. Officials at the U.S. Centers for Disease Control and Prevention also opposed it privately.

But the WHO last November approved the dollar-a-dose vaccine that is ready to be used in Haiti, the PAHO now favors the project, and the current government of Michel Martelly indicated approval in December. The CDC representative in Haiti says it’s supportive and interested in the outcome.

Now the project is awaiting approval from a national ethics committee, which wants assurance that the vaccine is no longer considered experimental.

To show how the campaign would work — and why it’s needed — Rouzier took an NPR team for a tour of the urban target area. It’s called Cite de Dieu, or City of God.

A health worker meanders through the narrow streets with a bullhorn. “Avoid cholera!” she says. “Get vaccinated!” It’s part of a awareness campaign that began in January.

Cite de Dieu is one of the worst slums in Port-au-Prince, with 40,000 people packed four and five per tiny room in dwellings made of whatever people can find.

“These are people who live in really subhuman conditions,” Rouzier says as we hop over a ditch in the dirt street. It’s filled with bilious, green water — an open sewer.

“When it rains, everything mixes. It becomes a soup,” Rouzier says, “which is a perfect breeding ground for every diarrheal disease, cholera included. The houses get flooded, and people are up to their knees in water and they just have to wait for the water to recede.”

Nadia Simone lives right next to this particular ditch. During last year’s rainy season, her young daughter got very sick with cholera. So she has registered her family to get vaccinated.

“All my children will be vaccinated, because I don’t want cholera to come back to my house,” Simone says.

Almost everybody contacted by GHESKIO workers in a door-to-door campaign has said they want the vaccine. Their names, ages and addresses have been entered into smartphones and uploaded into a master data file. (First, the health workers had to paint house numbers next to each doorway, because there were no addresses.)

Everyone will require two doses of the oral vaccine over a period of two to three weeks, so it’s important to keep track of who has had which dose.

Next, Rouzier takes us to a cholera treatment center. We wash our hands in chlorine water before and after entering a long army tent lined with cots. When we visit, there’s only a single recovering cholera victim. But a year ago, this place was jammed with desperately ill patients.

Many of them were young and previously healthy. But cholera moves fast. Although it’s easily treated, the diarrhea of cholera can kill within hours.

“It’s shocking to see somebody die of dehydration,” Rouzier says. “I saw a young 20-year-old collapse in front of me from paralysis because he had lost too much potassium. A healthy, strapping 20-year-old! This is unheard of!”

Some critics of the vaccination project say it’s better to focus on providing clean water and toilets. Rouzier says Haiti has to do both.

“Fixing the sanitation problem and giving access to potable water is the answer,” she says. “But let’s be realistic. When is that going to happen? And how many people can we allow to die in the meantime?”

The tragedy is, cholera was unknown in Haiti until recently. Then, 10 months after the devastating earthquake of 2010, it appeared with explosive force.

It started up in the mountains of Haiti’s central plateau, a three-hour drive from Port-au-Prince. The epicenter is a sleepy-looking United Nations encampment on the bank of a winding stream.

There is strong evidence that U.N. peacekeeping troops stationed there brought the cholera bacterium from Nepal. It spilled into the stream from a leaky latrine, and then flowed into the nearby Artibonite River, Haiti’s longest.

The disease spread with astonishing speed. Within a week of the first case, Dr. Patrick Almazor says, seriously ill cholera victims were overwhelming the hospital where he works in Saint-Marc, a small city 50 miles downstream from the U.N. camp.

“I remember, the second day of the outbreak, we saw 800 patients here in this hospital,” Almazor says. “There were patients everywhere.”

Most of them came from tiny villages downriver from Saint-Marc. It’s a beautiful countryside, crisscrossed by canals and irrigation ditches that nourish emerald-green rice paddies.

This is the other area chosen for the planned vaccination campaign. People here are at high risk for a new surge of cholera because they draw their water from the contaminated Artibonite.

Vaccinating the entire population in this rural area will be very difficult. People are scattered across a broad area with wretched roads. As in Port-au-Prince, 50,000 people in the area have been registered for vaccination by health workers, their data entered into tablet computers.

Many villagers say they’re eager to be vaccinated. They remember last spring’s rainy season and the quick-moving disease it brought.

If the project does go forward, however, proponents will face another hurdle. As the Haitian proverb goes, there are mountains beyond mountains.

After all, the planned vaccination project will reach only about 1 percent of the Haitian population. To bring cholera under control, experts figure they’ll need to vaccinate millions of people at high risk of cholera — before next year’s rainy season.