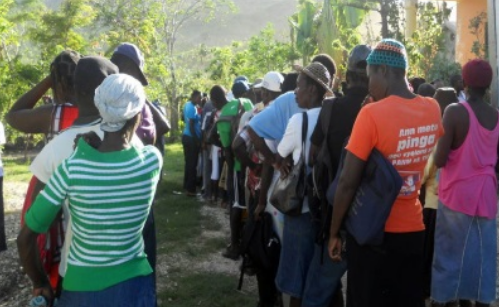 Haitians lining up for food following the passage of Hurricane Matthew (Photo: CMC)

WASHINGTON, United States (CMC) — The International Monetary Fund (IMF) is providing US$41.6 million to Haiti under the Rapid Credit Facility (RCF) in the wake of the damage caused by Hurricane Matthew last October.

The Washington-based financial institution said that Port au Prince had made the request to help with urgent balance of payments needs in the aftermath of the Category 4 hurricane that struck the nation on October 4, destroying infrastructure and killing hundreds of people.

The IMF said that with the support of the RCF disbursement, the Banque de la République d’Haïti (BRH) has continued to rebuild its net international reserves.

The IMF said that despite the favourable impact of the slowdown in depreciation, increases in food prices – due in part to the hurricane – have pushed inflation from 12.5 per cent in September 2016 to 14.3 per cent in December 2016.

“As a country with widespread development needs, Haiti continues to face substantial challenges. The successful conclusion of the recent presidential election provides Haiti with an opportunity to rebuild from the storm and to advance its reform agenda,” the IMF said, adding that it was looking forward to continuing to work together with the Haitian authorities in designing policies to support macroeconomic stability needed to boost economic growth.