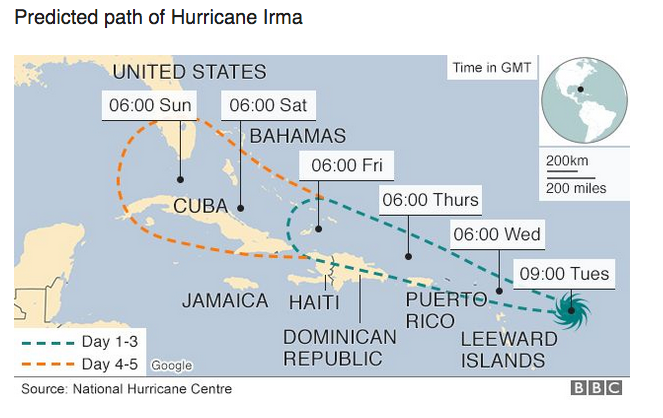 Hurricane Irma has been upgraded to a category five – the highest category – making it “extremely dangerous” as it crosses the Caribbean.

Irma now has sustained winds of 290km/h (180mph), making it the most powerful the Atlantic has seen in over a decade.

It is projected to bring storm surges, life-threatening winds and torrential rainfall to the Leeward Islands.

Florida, where it is due to arrive as a category four hurricane on Sunday, has declared a state of emergency.

Residents in Texas and Louisiana are still reeling from the effects of Hurricane Harvey, which struck as a category four storm in late August, causing heavy rain and destroying thousands of homes.

However the National Hurricane Center (NHC) has warned that it is too early to forecast Irma’s exact path or effects on the continental US.

The US mainland has not been hit by two category four hurricanes in one hurricane season, since the storms were first recorded in 1851.

Irma, which has been moving at a speed of 22km/h (14mph), is set to reach the Leeward Islands, east of Puerto Rico, within the next 24 hours, the centre added.

It issued a hurricane warning for the following islands:

Guadeloupe and the Dominican Republic, which borders Haiti, are on hurricane watch.

Rainfall of up to 30cm (12in) may occur in some northern areas and water levels may rise by up to 3.8m (12ft) above normal levels, the NHC said.

Puerto Rico has declared a state of emergency and activated the National Guard.

Governor Ricardo Rossello described the hurricane as “something without precedent” and announced the closure of schools on Tuesday.

The island has a population of 3.4 million people, and emergency shelters able to house up to 62,000 people have been opened.

Long queues of people formed in shops, with residents stocking up on water, food, batteries, generators and other supplies. 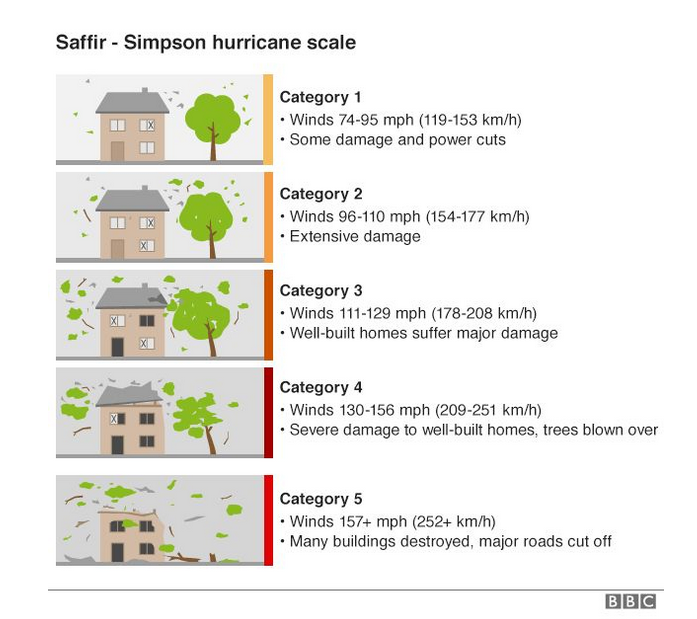 On St Martin, a woman in a supermarket told AFP news agency: “I [am] getting some stuff for the hurricane, because the hurricane is coming direct on us. They say that it’s coming on us so then I start to pick up truly the things what I need.”

A manager at the supermarket said people had been stocking up on “lots of canned food, cooked dishes, canned fish, paper towels, cleaning products, cakes, lots of cakes, and water, of course.”

In Florida, Governor Rick Scott said he had been assured by US President Donald Trump that “the full resources of the federal government” would be made available as the state prepared for the storm.

Florida Keys officials have ordered a pre-emptive mandatory evacuation of visitors to the islands will start Wednesday, ahead of the projected storm.

A third tropical storm, Jose, has formed further out in the Atlantic behind Irma, and is expected to become a hurricane later on in the week.

Are you in the region? If you are a holidaymaker unable to get a flight home or a resident who has been preparing for Hurricane Irma share your experiences by emailing haveyoursay@bbc.co.uk.

Please include a contact number if you are willing to speak to a BBC journalist. You can also contact us in the following ways: