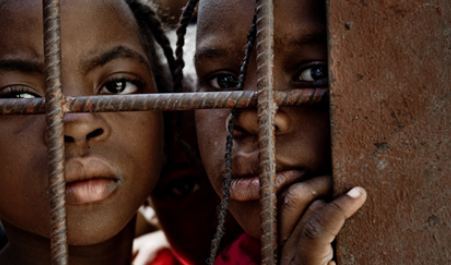 From its inception, and well before it made $10 billion of earthquake aid money disappear, Bill and Hillary Clinton’s Interim Haiti Recovery Commission (IHRC) was a vicious joke on Haitians. The original name, Commission Intérimaire pour la Reconstruction d’Haïti, should have been simply translated as Interim Commission for the Reconstruction of Haiti. After all, it was the commission that was temporary, not Haiti. There was also no need to change the word reconstruction to the vague term recovery, unless one deliberately wanted to suggest the collection of something. As the I-HRC, however, the organization not only acquired Hillary Rodham Clinton’s initials but also boasted that it would scoop up Haiti’s reconstruction funds and turn the world’s first black republic into a temporary construct. If Mrs. Clinton has become a zombie and the “I” in I-HRC has faded, this could easily be interpreted as a sign of the Haitian gods’ wicked sense of humor.

The great writer Toni Morrison once described Bill Clinton as “our first black President,” because of his background as a poor boy in Arkansas from a single-parent home, his fondness for junk food, and the political attacks on his sexuality. If so, then he has graduated to being the first black-American dictator of Haiti. For six years of a full dictatorship of the Clintons and their surrogates, on earthquake anniversaries Haitians at home and in the diaspora have made a ritual of searching through the rubble for the reconstruction funds that were donated by good people from all around the world. “Where did the money go?” everyone asks. The answer is simple: for a while it probably sat in the Swiss and Caribbean offshore banks where dictators stash their loots. 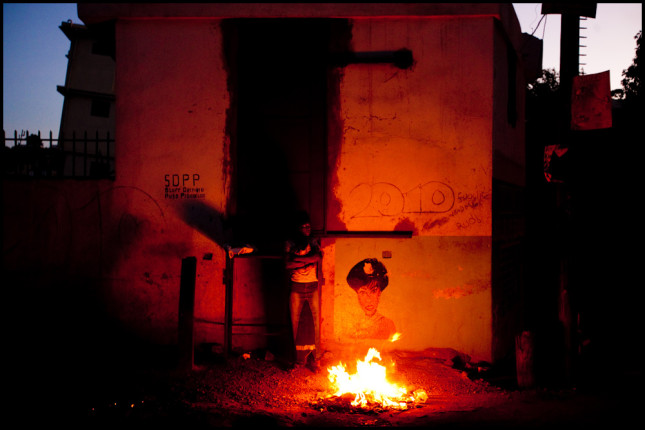 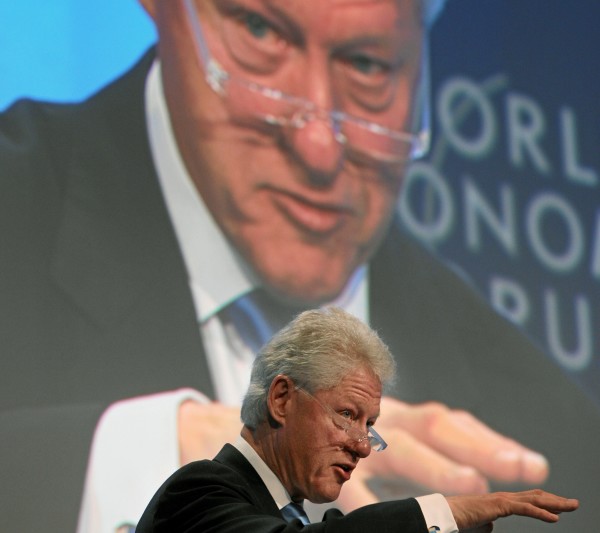 In 2012, the United States presidential elections cost a record $2.6 billion. The Republican challenger Mitt Romney raised $0.99 billion, and the Democratic incumbent Barack Obama managed to raise an unprecedented $1.07 billion. Both politicians are regarded as champion fundraisers because of their feats. In 2016, by all estimates, the cost of the US presidential elections doubled or quadrupled to about $5-10 billion. This is the most expensive presidential bid in history, and Hillary Clinton has vastly outspent Donald Trump. Where did the money come from? 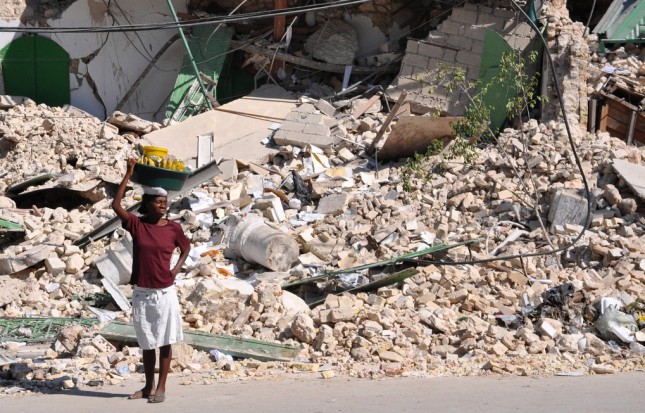 As of August 22, 2016, Clinton had officially raised only $0.436 billion, and her top six donors had contributed about one tenth of these funds. Donald Trump, for his part, had raised $0.129 billion, and the money from his top six contributors amounted to $0.011 billion. These sums fell quite short of the money being spent by the two politicians, especially Clinton, who had already spent about $0.1 billion on television advertisements alone by the end of August and had planned to spend $0.077 billion more for advertisements in September and October. Furthermore, Mrs. Clinton has relied on a large and well-paid entourage that has probably included medical personnel, and during her busy campaign schedule, she has used private airplanes like some of us take buses and taxis. Most of the money for her campaign has probably come as “disbursements,” which are not counted as carefully as money donations. These include out-of-pocket funds from the candidates and friendly donations of various services. Such disbursements have obscured the engine of the 2016 US elections to an unprecedented degree. 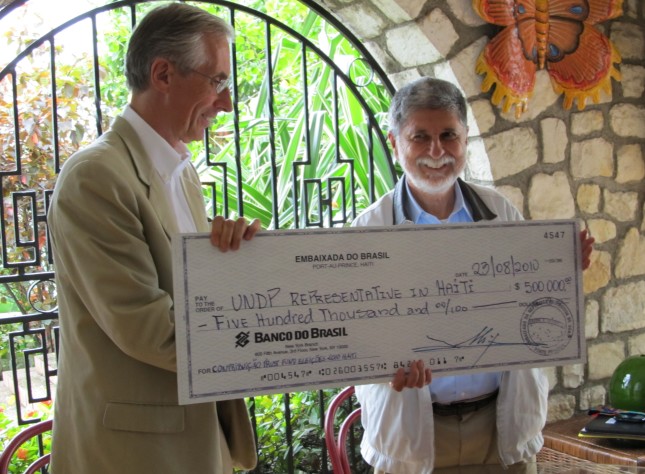 It is not possible to raise billions to tens of billions of dollars legitimately for political campaigns. More and more, in the West and in emerging market economies, these astronomical sums for elections are extracted from unsuspecting taxpayers. We have Brazil to thank for some insights into the machinations of politicians to finance their campaigns. In Brazil, the state energy company, Petrobras, was granting contracts to construction companies with the understanding that a percentage of the funds would be applied to the campaigns of various corrupt politicians. The money-laundering scandal, which involved more than $15 billion and led to PresidentDilma Rousseff’s impeachment, is estimated to have touched every political party and 70 percent of the country’s ministers and legislators. 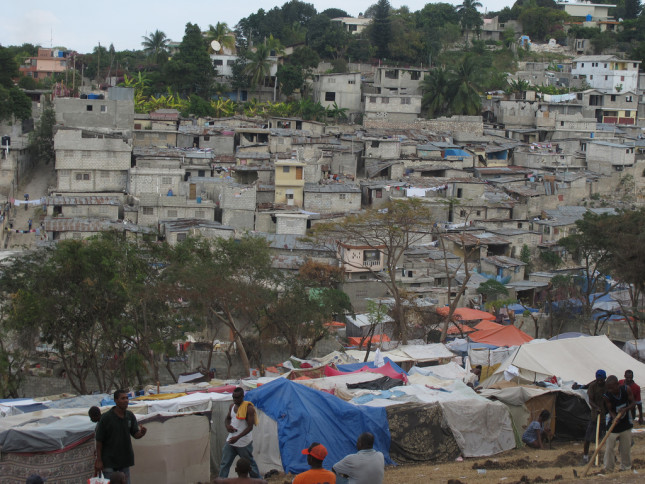 For the Clintons, the boon from Haiti’s earthquake of January 12, 2010, came while HRC was Secretary of State, and Bill Clinton was the United Nations Special Envoy to Haiti. As soon as massive numbers of Americans began to donate small sums of money for earthquake relief, Bill and Hillary Clinton transformed themselves into the face of Haiti. In their most calculated compassionate voices, they told stories about their marvelous honeymoon on the island and implored the public for donations. In reality, in the US State Department, the mood was celebratory. The US Ambassador to Haiti, Kenneth Merten, had cheerfully titled a section of his situation report “THE GOLD RUSH IS ON!” 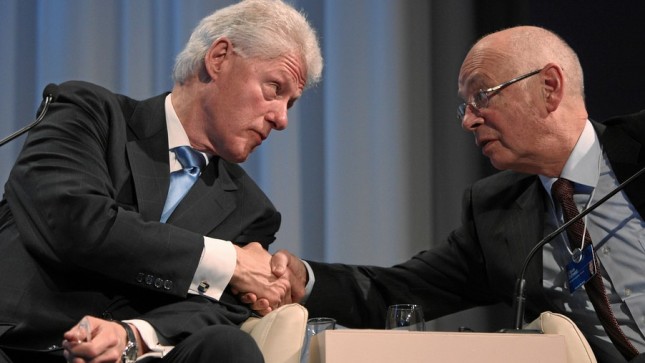 By March 8, 2010, Bill Clinton had applied sufficient pressure on President René Préval, to force Haiti’s Lower House to vote yes on a State of Emergency that would allow a group of rich donors to run the country for 18 months via the IHRC. During the same month, Hillary Clinton went to Montreal to raise money, ostensibly for Haiti’s reconstruction, and Bill Clinton went to Davos to collect the rich donors. The next month, Bill Clinton worked to push his project on Haiti’s Senate, where it was ironically called a coup d’état d’urgence. The Senate voted no on April 8, but President Préval insisted on another vote. In the next vote on April 13, 10 out of 25 senators stayed home to prevent a quorum. On April 14, Michelle Obama made a special trip to Haiti, and the next day the deal was done. The vote was 9 away, 2 abstaining, 1 no, and 13 yes. All but one of the yes votes had come from Préval’s party. Thus slightly more than three months after the earthquake, on April 21, 2010 the IHRC was inaugurated. 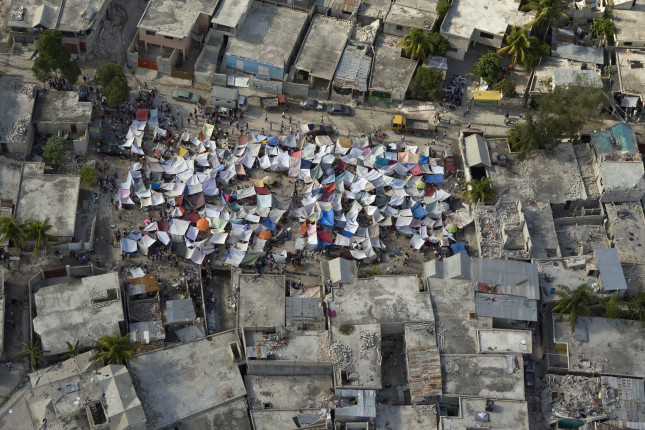 With the IHRC, the Clintons established in Haiti their dream government, which I described, when I first observed it, as  “pay-to-play,” meaning: an unelected government where political participation is based on money invested. In the IHRC, there were two parts: one foreign and the other Haitian. Bill Clinton chaired the foreign section, which included the representatives of 14 donors [US, European Union (EU), France, Canada, Brazil, Venezuela, Inter-American Development Bank (IDB), United Nations, World Bank, Organization of American States, CARICOM, the private donors, the diaspora, and the NGOs]. Each donor had to pledge to the IHRC $0.10 billion over two years or forgive $0.20 billion of Haitian debt. 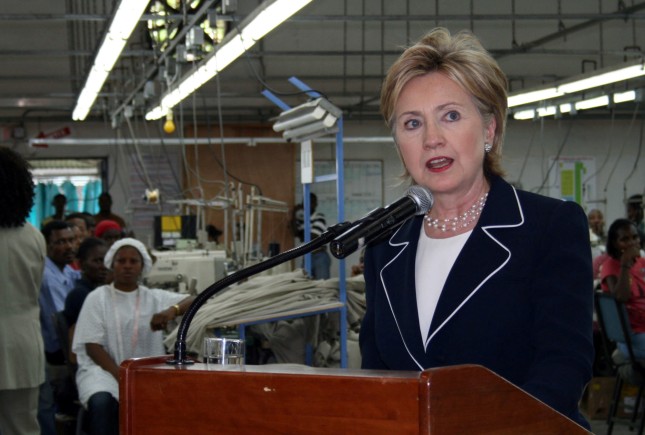 The poorer, Haitian, section of the IHRC had only seven members. Haiti’s Prime Minister, Jean-Max Bellerive, formally led it as the nominal Co-Chair of the IHRC. The other six members were President Préval, who was allowed only a symbolic veto, plus one person each to represent the Lower House, Senate, judiciary, business sector, and unions. Every Haitian member had to be approved by the foreigners, and Clinton ran all the show. 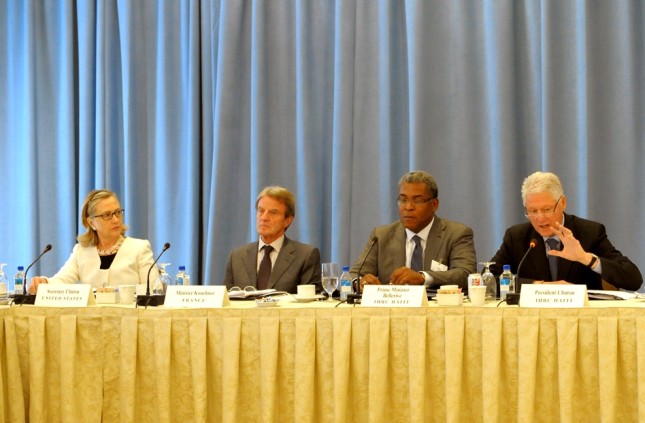 As the reconstruction money poured in, the IHRC became increasingly arrogant and opaque. According to the IHRC charter, Clinton and Bellerive gained the right of final approval over all major construction projects in Haiti. In addition, they even gave themselves the power to grant titles. Meanwhile, Haitian ministers and elected officials were blocked from IHRC meetings because they were “not on the list.” 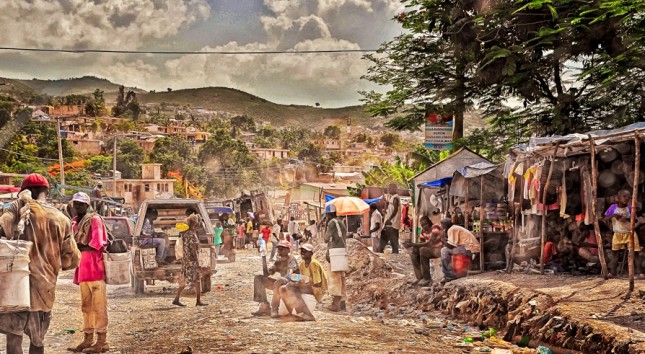 The IHRC is estimated to have collected $5.3 billion over two years and $9.9 billion over three years, without reconstructing much of anything. This represents more than five times the money that the Clintons have collected by other mechanisms like the Clinton Foundation orLaureate University. Bill Clinton has claimed at various times that he only received 10 percent of the funds that had been pledged to the IHRC, but even if this were true, a vast sum of money would still have disappeared. By July 2011, Haiti’s Ministry of Public Works, Transportation and Communication (MPTC) had approved $3.2 billion of IHRC projects, but only $0.084 billion (2.6 percent) worth of projects had been completed. 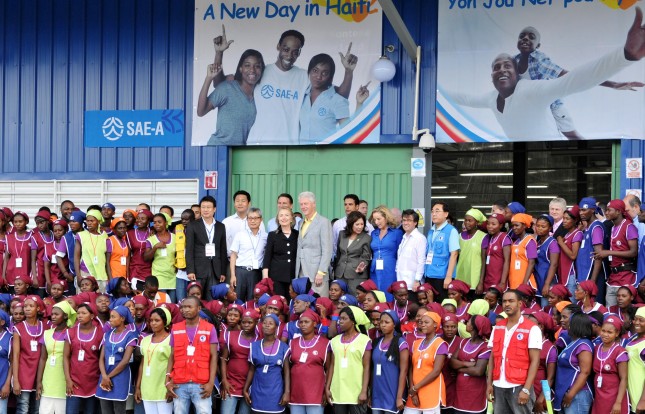 In a meeting of the Senate Public Works Committee with the MPTC on August 11, 2011, the Senate Committee Chair, William Jeanty, said that the IHRC had not only appropriated for its balance sheets the projects of several Haitian ministries but also claimed credit for financing MPTC projects that had been funded by the EU and IDB before the IHRC was formed! To date, the only notable IHRC project has been Caracol Industrial Park, a sweatshop complex in northern Haiti, well away from the earthquake damage. Its construction was financed byUSAID ($0.124 billion) and the IDB ($0.105 billion), and its unstated purpose was to force the construction of modern seaports and airports in northern Haiti to support mining. To create a few thousand slave-wage jobs, this industrial park built without regard to its environmental impact, has destroyed the homes of hundreds of farmers and polluted a pristine river and bay. 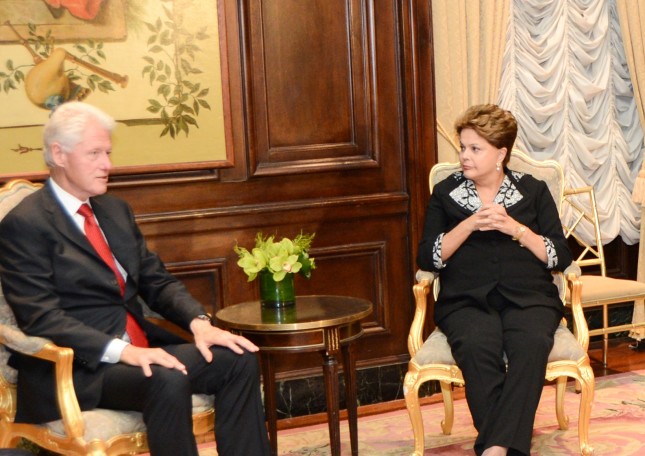 The IHRC barely lasted through its 18-month term. After this, Haitian politicians publicly declared it to be dysfunctional, and the Haitian Senate did not renew its mandate. On April 10, 2014, two Haitian lawyers, Newton Louis St. Juste and André Michel, filed a legal action against Bill Clinton in Haiti’s Superior Court of Auditors and Administrative Disputes. On October 13, 2014, the court asked Clinton to provide an audit of the IHRC funds. Rather than abide by the court’s request, Clinton claimed immunity based on the fact that he had been the UN Special Envoy to Haiti. 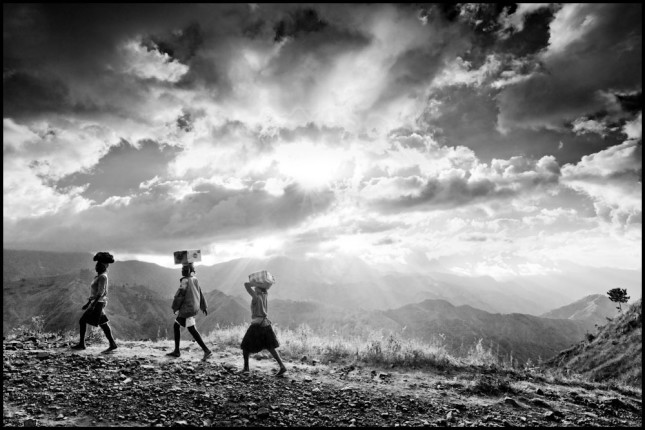 It is unlikely that Haitians will ever recover the funds that have vanished into the IHRC, and that are now probably financing HRC’s campaign. At best, one might hope that Hillary Clinton will lose the election and thus be prevented from gathering more power. The big prize in her sights now is the United States, where she and Bill Clinton should be able to charge billions of dollars to each participant in a pay-to-play government. Political arguments about racial justice and the lesser evil entirely miss the point that in a pay-to-play government, those who are poor or even middle class, will count only for what they can furnish of themselves to the rich. This will certainly mean low wages, prisons, and an unprecedented predation on those who are directly hit by climate-change catastrophes. For Haitians at home and in the diaspora, who have seen the devil itself in I-HRC, she could never be a choice for anything. As for the ancestors: if they have their way with her, she will come close enough to the presidency to taste it, touch it and smell it, and then, she will lose it.

Editor’s Notes: Dady Chery is the author of We Have Dared to Be Free. Photographs one and eight from United Nations Development Programme archive; two and fourteen by Zoriah; three and seven from the World Economic Forum archive; four and six fromDirect Relief archive; five and thirteen from the Minesterio Das Relacoes Exterioresarchive; nine, ten and twelve from the US Department of State archive; and eleven fromBlue Skyz Studios.