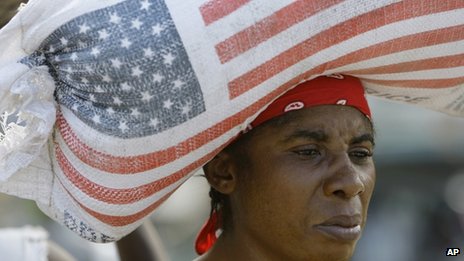 Food shipped from America has saved the lives of millions of people since the Food for Peace programme was set up in 1954, but the strict rules demanding almost all of the food has to be sourced in the US and sent on American ships are coming under increasing attack.

The Director of USAID, Rajiv Shah, says four million more people could be fed every year if he had more flexibility about where he bought food.

President Barack Obama’s 2013 budget proposed to change the law so that 45% of food for aid could be bought outside the US, or the hungry could be given cash instead.

But opposition is proving hard to overcome. Instead Congress appears set on voting for a decrease in the aid budget, as foreign aid programmes are increasingly unpopular at a time of budget austerity at home.

If the reform fails, then the US would be the only major donor still delivering aid in this way.

Other countries prefer to give cash or vouchers. Innovative schemes are bringing the most advanced technology to cope with the needs of hungry people.

The Care relief agency, for example, has a database of people in potential need in remote places such as the semi-arid lands of northern Kenya.

Vulnerable people have plastic cards like credit cards, which they can use at a time of need. 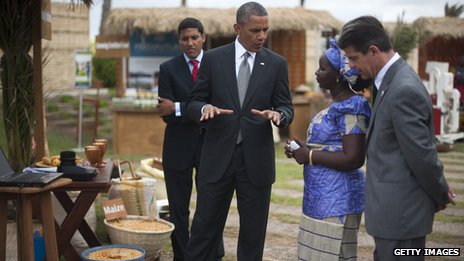 Ezekiel Lentorer, from Care, said this means they can remain where they are for longer at times of drought, not losing their animals or livelihoods.

He said: “I prefer cash every time, much better than food aid…With food aid, you give me maize only, at the end of the day I have no salt, no oil. And [with cash] all of the aid gets to the recipient, rather than being lost on the way.”

Elsewhere in Kenya the World Food Programme (WFP) is pioneering a scheme to improve crops and the marketing skills of farmers, encouraging them to form co-operatives to give them more bargaining power.

The WFP guarantees to buy some of the produce to give to hungry people elsewhere, so the programme has a double benefit. 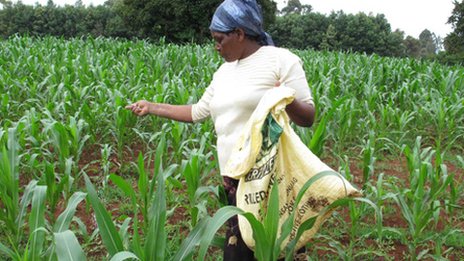 One of the farmers in the scheme, Mary Kisioro, said the major difference for her was that the co-operative could secure credit, which she could not do before.

She said her agricultural productivity had improved and her income had increased.

But the US remains limited by law as to how much it can put into these sorts of schemes. A leading expert on food security, Chris Barrett of Cornell University, says it has lost the economic argument.

“In terms of the policy merits, this is a settled issue. The resistance turns on the political economy. In particular a coalition of large agribusinesses that benefit from present arrangements,” he said.

This is not a partisan issue. 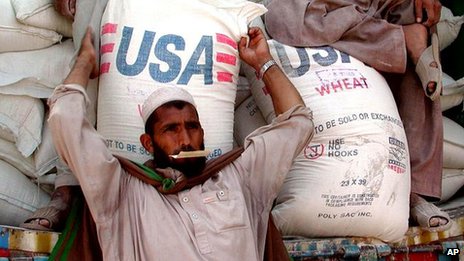 After of the fall of the Taliban USAID flew in large quantities of US wheat, which drove down the price of Afghan wheat

The Director of USAID during the Bush years, Andrew Natsios, now believes if the US had been able to buy Afghan wheat to give to the hungry after the fall of the Taliban in 2001, that might have prevented the collapse in the price, a major factor contributing to an increase in the production of opium poppies.

Afghan farmers could not compete with imported wheat after the best harvest for many years and the price fell by 80%.

Some farmers were forced to leave their land, others ploughed the wheat into the ground and planted poppies instead.

One farmer, Haji Mohammed Akbar, said when the prices collapsed “we grew only as much as we needed to eat, but grew poppies on the rest of the land”.

He has now persuaded most of his neighbours to grow saffron flowers instead, one of the few crops as profitable as opium poppies. But across much of Afghanistan the large rise in poppy growing seen after the fall of the Taliban has proved stubbornly hard to reverse – an unintended consequence of the US-led intervention.

Those who oppose reform of USAID, such as Dale Moore, policy director of the American Farm Bureau Federation, argue that the current system works well to feed the hungry.

“Why not leave the programme the way it is? It’s set up, it’s working, the proof is in the how the programme has delivered,” he says.

“I’m not going to argue that it can’t be improved. I would think that could be a matter we could all sit down and talk about that.

“But there are those that would much rather be in charge of the cash transfers to some of these entities out there as opposed to having to work with US farmers and ranchers to help feed those folks who are truly hungry and needy around the world.”

This year USAID has already exhausted its limited ability to send cash or source food locally because of the demands of Syria.

It means that if there is any further emergency in this financial year their response could only be through food sent from the US – a supply chain that can take five months to deliver.