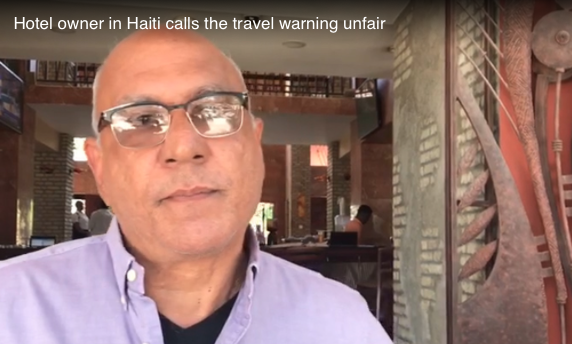 BY JACQUELINE CHARLES | MARTA OLIVER CRAVIOTTO As gang warfare, fuel shortages, kidnappings and other crises cripple Haiti, it’s hard to push the Caribbean country as a tourist destination. But that’s exactly what a group of Haitian Americans is trying to do. Along with party planners from South Florida, the group is hosting a lavish pop-up picnic with hundreds of guests elegantly dressed in white converging on a secret location in one of the Caribbean nation’s most historic cities to share a meal. Under the theme “Reimagine Haiti,” Le Dîner en Blanc in Haiti — “the dinner in white” — returns to the country’s tourist calendar on Saturday at an undisclosed location in the northern city of Cap-Haïtien.

Organizers say they are planning for an attendance of more than 900 people, tourists and influencers who until now haven’t had a chance to visit the historic city or the country because of fears of kidnappings and dangerous criminal gangs. TOP VIDEOS Top Videos La Ventanita: Rane Roatta’s highlightsRedland phallicfruit (Clip) × “The international community — which I can understand why — tend to see Haiti through the eyes of Port-au-Prince only,” said Fabienne Reid, one of the event’s organizers and a Miami resident. “They think if there’s civil unrest in Port-au-Prince, then it’s the whole Haiti that’s like that, which is really not the case at all.” Haiti was once a leader in tourism in the Caribbean, opening the region’s first Club Med property along what is known as the Haitian Riviera just north of the capital. But the French resort chain was boarded up in 1987 amid the fall of the Duvalier dictatorship, which helped ravage the country’s tourism industry. After the 2010 earthquake, there was a push to revive tourism with internationally branded hotels like Marriott and marketing campaigns aimed at young Haitian Americans looking to promote a different kind of image for the country. 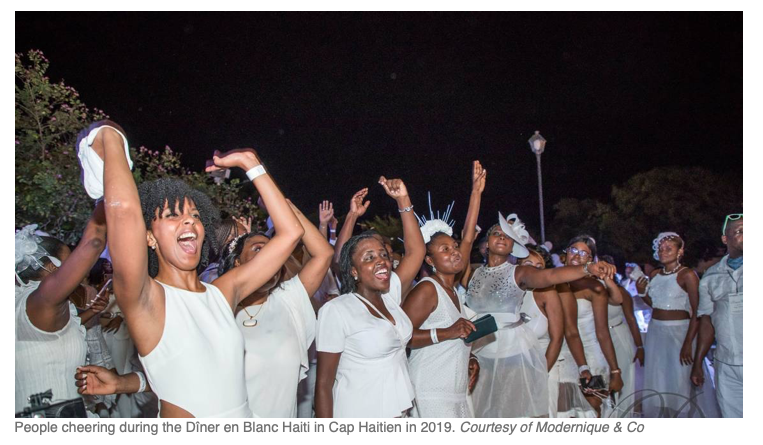 But after welcoming 1.3 million tourists in 2018 — the highest number since the World Bank began collecting numbers in 1995 — the number of visitors dropped to 938,000 in 2019. The drop coincided with violent protests and kidnappings, travel warnings from the U.S., Canada and France and the nationwide protests known as peyi lok, which led to the country being shut down for months after the government attempted to raise fuel prices. Then came COVID-19, and more travel warnings amid fuel shortages and more spikes in kidnappings and gang activities.

Samuel Darguin, the founder and executive director of Haitian-American Caucus, who is attending the festivities this weekend, said his presence is about sending the message that “there is still hope.” “I think for me, this year is even more important, just given everything that’s been going on in Haiti and the insecurity,” said Darguin, who attended Le Dîner en Blanc in 2013 and 2014 when it was staged in the capital. Darguin, who is Haitian, says he is traveling with a group of eight individuals and all “are so eager to be able to go back home.”

Haiti celebrated its first edition of the dinner in Port-au-Prince in 2013 with the original planners, Carla Beauvais and Johanne Buteau, and it continued until 2017. In 2019, a new group of organizers purchased the licensing to take over and host the picnic, relocating it to Cap-Haïtien. South Florida resident Jimmy Moise, who also holds the licensing for Le Dîner en Blanc in Palm Beach County, currently holds the licensing for Haiti and, along with Reid and Johanna Auguste Pierre Louis, is this year’s host. Reid said in bringing the event back to Haiti this year after canceling in 2020 and 2021 due to COVID-19, she and her fellow hosts wanted to use it as a means to revive tourism.

“That’s the direction we want to move forward with, that is to move it in touristic cities in Haiti that show a different face and a different angle of Haiti. It’s what the world doesn’t know of Haiti,” she said. “For example, Okap, Jacmel and Les Cayes.” Cap-Haïtien, also known as Okap and located about six hours north of Port-au-Prince, is still relatively safe despite the occasional protests over blackouts, a lack of fuel and government ineptness. It’s the city where much of the country’s beginnings can be traced, with the Palais Sans Soucis (Sans-Souci Palace) and the Citadelle Henri, the mountaintop fortress built by former slaves and now a designated UNESCO world heritage site in Milot. The city is also home to Bois Caïman, the site where the slave insurrection of the Haitian Revolution was planned in a secret Vodou ceremony. Still, getting there by road remains a risky venture, leaving many to fly — including from the U.S., where the only option available was Spirit Airlines — or crossing over by road from the Dominican Republic, which some attendees like Darguin and his group have chosen to do.

“That just kind of shows our dedication to it,” said Darguin, who is flying from New York to the Dominican Republic to cross the border by foot into Haiti after being unable to get a flight. “We could have said, ‘Hey, there are no direct flights. So we’re gonna just cancel.’ But by any means necessary, we need to show that as Haitian Americans, we are going to be in support of Haiti.” West Palm Beach resident Eslande Berjuste, who is attending the picnic for the first time, said she decided to make the event and Cap-Haïtien this year’s travel destination for the Travel Tribes travel agency she founded. She said she’s going with a group of 16 people, including five Haitian Americans and a Jamaican American. “I’m honored to be able to not only be a part of it but to be able to bring people here who have never even thought of coming here and just showing them like Haiti, a different side of Haiti,” said Berjuste. Le Dîner en Blanc originated in Paris in 1988. the brainchild of Frenchman François Pasquier and his friends. It began as a humble affair, but over time, it has grown into an international phenomenon held in more than 80 cities across 30 countries in the world, including in Miami this past April 19. Attendees bring tables and chairs to a location that stays secret until the last minute. In Haiti, the event has been modified with table leaders providing meals as part of a package.

Guests’ attendance is mandatory, regardless of the weather forecast. All attendees will meet at a departure location that was disclosed upon registration. However, they will get transported by bus to the final destination, which will remain secret until they arrive at the venue. Once all the attendees have arrived and set up their tables, a wave of the napkins will signal the start of the traditional dinner, involving special acts and performances from guest artists. But the picnic isn’t the only event. Some travel groups have planned a whole itinerary, offering visitors tours of the city and beaches located in Labadie. Reid said about 60% of the attendees will arrive from the U.S. and Canada, and approximately 30% are local. The remaining visitors are coming from Europe. Tickets to attend this Saturday’s picnic are sold out, and organizers saw an increase of more than 63% from the approximately 550 people the event attracted in 2019, she added. Reid hopes the event will ultimately encourage Haiti’s economic revival by supporting local businesses. “It’s really those local entrepreneurs, tour companies, taxi drivers, waitresses at restaurants, those restaurant owners, hotel people, those tour operators and the employees that they have who survive under tourism activities,” she said. The organizers estimated that this event will contribute more than $600,000 in revenue to the Haitian economy.

“We sold out about 13 to 17 hotels, and countless Airbnbs are sold out,” she said. ”We had to rent over 24 buses; the food, the wine, the excursions, and each tour is about $120 a pop.” For Reid, this year is already a success considering that restaurants and hotels are doubling their staff to prepare for the event. “We do Dîner en Blanc in other cities in the United States and in Europe,” Reid said. “To be completely transparent, Haiti is the least moneymaker for us, but the satisfaction comes with the impact it has on the local economy.” Reid said that her team is working with many different institutions to ensure the safety of the attendees, including the Haiti National Police in the city, which has a special task force in place for the protection of tourists. The organizers also hired their own security firm to blend in with the crowd. Official police officers will escort each bus transporting the guests. “The security is top notch for us,” Reid said. “We’re not naive about what’s going on. We’re not in denial that Port-au-Prince is really going through a lot — corruption, insecurity, you name it, it’s there. However, the whole country is not in that same state.” Angie Bell, who divides her time between Miami and Haiti, has had a number of tourism events leading up to this weekend, and is using it to promote her efforts to clean up the streets of Cap-Haïtien. “We have a table of 30 people, between locals and their friends that are coming from outside of Okap,” said Bell, who attended the event in 2019 and this year decided to partner up through her social initiative, Bien Nettoyer or Well Cleaned. Miami Herald Caribbean correspondent Jacqueline Charles contributed to this report.

This story was originally published August 12, 2022 8:17 AM. ALMA BEAUVAIS Alma Beauvais is an intern reporter for the Miami Herald’s Caribbean and Immigration desk.