It is early evening in Place Saint Pierre, a park in Port-au-Prince and children are giggling as they play tag.

In the immediate aftermath of the earthquake in Haiti two years ago, the park became a sea of tents, an instant refuge for the homeless.

Now the families who lived here in cramped conditions have moved on – they were each given $500 (£325) to rent a new home for a year.

“Things are changing and moving in Haiti,” President Michel Martelly told the BBC.

“We were slow to move people out of the camps and lately we have been able to do it and I can say that’s a huge step. “

Mr Martelly and his advisers are proud of the progress they have made with a programme called 16-6.

Under this, 5,000 families from six high-profile camps in Port-au-Prince are being moved out to 16 neighbourhoods.

“We wanted to show donors what worked, to provide a road map – now I can say we have a way forward.”

But there is a long way to go, with some 500,000 people still living under canvas in the Haitian capital. 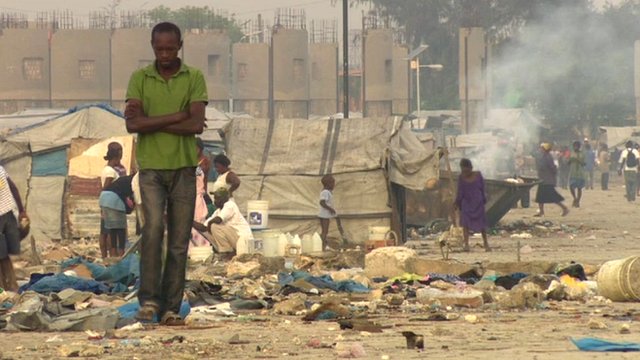 n the Jean Marie Vincent camp on the outskirts of Port-au-Prince, residents long to leave.

Crime is rife and women have been raped. We see one man hold a gun to the head of another as we enter the camp.

The UN police insisted on escorting us round, telling us that cameras are stolen regularly.

Marie Therese has lived here for two years and is desperate to move, but she has nowhere to go and very little money.

“I live in fear every night,” she said, as she painstakingly made up bags of charcoal, which she sells in the camp.

The worry is that encampments like this are well on their way to becoming permanent settlements.

President Martelly is aware of this risk.

“Haiti has a big wound and that wound is deep. You cannot solve everything in one day,” he said. “We want to move fast but we also want to do it right.” 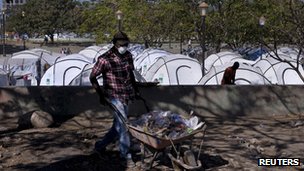 The Mais Gate camp by the airport now has just a few families left.

Daphne is packing up her belongings and preparing to move her family, having been one of the recipients of a Red Cross grant to pay 12 months’ rent.

What happens after then, I ask. Daphne, who has no job, says she is asking God to help.

In the Champs-de-Mars camp, opposite the ruined presidential palace in Port-au-Prince, I meet Billy, who makes small amounts of money selling his pictures.

“I don’t want to leave,” he said. “After they pay my rent for one year, I won’t be able to make the next year’s, and I’ll be back on the streets. At least it’s free here.”

Eduard Tschan, who heads the International Federation of the Red Cross and Red Crescent Societies in Haiti, says the process of emptying the camps “is fine as long as you have rental stock.”

But much of the rental housing in Haiti was damaged by the earthquake. 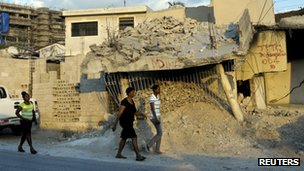 Removing vast amounts of rubble has been a huge challenge

Mr Tschan says that unless the pace of reconstruction and repairs increases, then programmes to empty the camps will undoubtedly slow down.

Fifty per cent of the rubble from the earthquake has been cleared and there are new roads around Port-au-Prince. But reconstruction is taking time.

The billions of dollars pledged to Haiti in the aftermath of the earthquake have been slow to arrive.

Worries about corruption in Haiti led governments to pledge the money with multiple strings attached.

Haitian officials say it is difficult to match the priorities of those who want to give money with what the country needs: donors want to build schools, but no-one wants to fund the teachers who will run those schools. 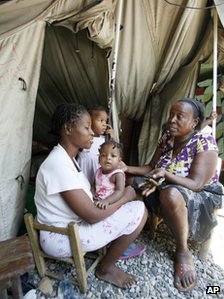 Women and children have been left particularly vulnerable to violence

In October, the new Haitian government took office headed by technocrat Garry Conille, who has a UN background.

“I’m sensing there is international support for this government,” says Mr Tschan. “People like Garry Conille and Patrick Rouzier are really very good.”

One observer of Haitian politics even went as far as to ask if President Martelly might be Haiti’s Churchill.

Yet there are also worries about how far Haiti’s parliament will work with the new government.

What’s your priority, I ask Mr Martelly, the musician turned president who leads a country where eight million do not have electricity and 70% are either unemployed or underemployed.

“We understand that to develop Haiti you need infrastructure, but we also believe it’s time to reconstruct the Haitian persona, send our kids to school,” said Mr Martelly.

“Changing the lives of the Haitian people is not going to be easy… only someone who does not understand the complexity of the situation would make promises he can’t keep.”