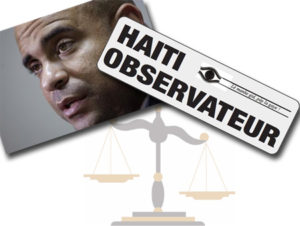 MIAMI — Haiti’s prime minister is pursuing his defamation case against a Haitian-American journalist.

Prime Minister Laurent Lamothe and South Florida businessman Patrice Baker originally sued Leo Joseph in September over his reporting in the New York-based Haiti-Observateur. A federal judge in Miami initially sided with them, but she reversed course earlier this month and ordered them to be more specific in their allegations.

The amended complaint was filed Friday. It alleges that Joseph knew his reporting about the Haitian government’s acquisition of a telecommunications company included false and defamatory statements about Lamothe and Baker orchestrating and benefiting from the sale of Haitel.

Joseph knew he was making false statements because it is “widely known and common knowledge within Haiti and the Haitian community residing in the United States that Haitel was never sold, let alone manipulated for sale by Plaintiffs Lamothe and Baker,” according to the complaint.

It adds that Joseph knew the Haitian government had frozen Haitel’s assets because of back taxes owed and for operating without the proper licenses. The seizure of the assets “would preclude a sale to a third party as falsely stated by Joseph,” the complaint said.

Joseph has stood by his reporting on Haitel, which shut down last year after it couldn’t pay its debts. Haiti’s government then acquired the company.

Joseph’s attorney, Scott Ponce, said Monday that he would review the amended complaint. Miguel Armenteros, the attorney representing Lamothe and Baker, did not immediately respond to a request for additional comment.

Haiti-Observateur has been publishing since 1971 and serves Haiti’s large diaspora communities in New York, Florida, Montreal and the Caribbean.