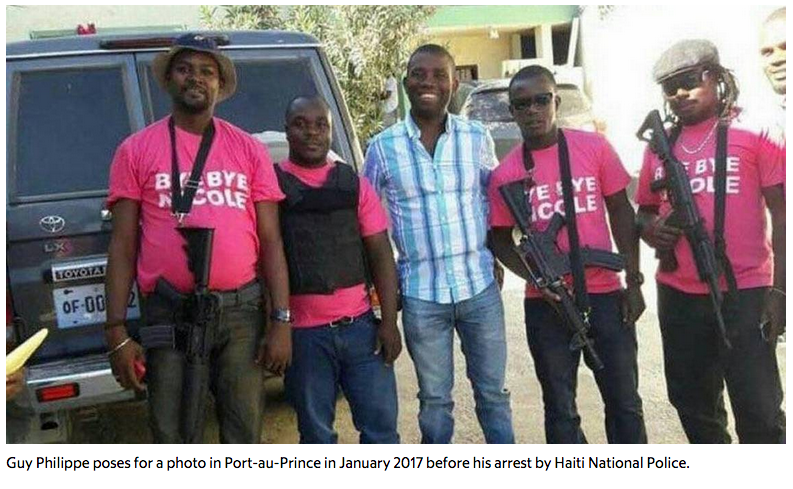 By Jacqueline Charles And Jay Weaver

He led a bloody revolt against a sitting president. He eluded several attempts by U.S. authorities to capture him on drug charges. And even after pleading guilty to money laundering, Haiti’s best-known rogue revolutionary is still trying to be a rebel — this time, from behind bars.

Despite agreeing a year ago that he would never appeal his guilty plea in a Miami federal court, Guy Philippe did just that — filing a civil rights lawsuit against a slew of authorities with the aim of overturning his criminal conviction. He also seeks $100 million in compensation.

The suit is unlikely to succeed — except in keeping Philippe’s name on the radio airwaves during upcoming elections in Haiti.

In 22 pages of handwritten and typed pleadings, the 50-year-old Philippe sued former U.S. ambassadors to Haiti, federal prosecutors involved in his criminal case and unknown agents with the Drug Enforcement Administration. He accused them of violating his civil rights, claiming he was kidnapped in Haiti by DEA agents who fired shots at his security personnel. He also asserted that prosecutors presented “false evidence and perjured testimony” to obtain his conviction in Miami federal court.

Philippe, who eluded U.S. authorities for more than a decade, demanded his release from U.S. custody and return to Haiti. He also sought $100 million in damages, plus $185,000 in attorney’s fees, for his “pain and suffering” in custody and “the perceived infringement upon his political activities,” according to a magistrate judge’s summary of his complaint.

Federal authorities never answered Philippe, who filed his suit in March while incarcerated at the Federal Correctional Institution McKean in Bradford, Pennsylvania. He has since been moved to the Federal Detention Center in Miami.

But his civil rights complaint, at least so far, has made zero headway.

Magistrate Judge Patrick White recommended in April that it “must be dismissed for failure to state a claim.” Then in early May, Philippe asked U.S. District Court Judge Marcia Cooke to dismiss his suit: “without prejudice,” meaning he could refile it in the future. And in late May, Cooke dismissed the case but left open Philippe’s option to refile it.

Cooke’s dismissal order sparked a big buzz on the internet, with Haitians in Miami and on the island asking, “Is this for real?” and wondering what was behind it. As some tried to analyze what Cooke’s order of dismissal meant, some made light of the move and offered their own interpretation. Another on Twitter made light of the issue, writing in Creole: “Guy Philippe arrived in Haiti with an America passport. Everyone is going crazy. He’s losing the fight.”

Another surmised that if he were to return “he would win the election … that’s what makes them afraid.”

Philippe’s criminal defense attorney, Zeljka Bozanic, told the Miami Herald that she was not involved in his civil rights case and declined to comment about it.

Haitians speculated that Philippe, a former Haitian National police office who led the 2004 coup attempt against Jean-Bertrand Aristide, may have filed the suit for show. It put him back in the news and in the political conscience of Haitians just as the country’s political parties are trying to figure out who is going to run in next year’s legislative elections.

Philippe ran for the Senate in 2016 — and won in a runoff — as a member of the National Consortium of Haitian Political Parties. The head of his party, Jeantel Joseph, was among those leading protests on his behalf in front of the U.S. Embassy in Port-au-Prince. Joseph was later appointed to a top job as public security chiefin President Jovenel Moïse’s administration.

Legal experts say there is no problem with prison inmates contesting their civil rights. But jailed defendants can’t contest a guilty plea after striking an agreement with the U.S. Attorney’s Office if they give up that right. That’s what Philippe did when he admitted he accepted between $1.5 million and $3.5 million in cocaine profits from Colombian traffickers for allowing them to use Haiti to ship cocaine to Miami and other parts of the United States between 1999 and 2003.

By pleading guilty to a single money-laundering conspiracy charge, Philippe avoided the risk of a trial with possible conviction on the initial charge of participating in a drug-trafficking scheme. And in doing so, Philippe avoided a potential life sentence.

Philippe’s sentencing culminated a federal investigation into drug trafficking, money laundering and corruption at the highest levels of Haiti’s government that began more than a decade ago when the island became a notorious hub for shipping South American cocaine into the United States.

COMMENT: HAITIAN-TRUTH.ORG
Guy’s legal defence placed him in an impossible situation.
Guilty of Money Laundering is one thing.
Guilty of Money Laundering funds resultant from the sale of cocaine into the United States was a Dumb, Dumb, Dumb concept.
He also agreed not to appeal his sentence, thereby locking the door.
Anything now is smoke and mirrors.
Time for the Intelligence Community to step forward and save one of their own, a guy who received America’s Distinguished Service Medal, an award that could only be authorized by the American President, George Bush.