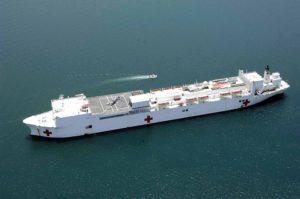 By Steve Sternberg, USA TODAY
ABOARD THE USNS COMFORT — Yvelot Brianville, 24, lies quietly on a steel hospital gurney, a boyish naval officer in blue combat fatigues standing by his side.

The officer, Lt. Cmdr. Mill Etienne, 34, is Haitian, fluent in Creole. He is also a neurologist, called to the intensive-care ward of this floating U.S. Navy hospital just off the coast of Port-au-Prince to assess the impact of Haiti’s earthquake on one man’s spine.

He finds that Brianville is paralyzed from the chest down. When Etienne gently breaks the news, Brianville begins to cry.

“That’s hard news for anybody,” says Lt. Robyn Reynolds, a nurse, coming to console him.

Haiti’s hard news keeps coming. Patients board the hospital ship every day. More than six days into the Comfort’s mission here, more than 450 patients are on board — people who were crushed under rubble, who are sick with infections and nursing diseases made worse by neglect.

The death toll has reached 150,000, according to the Haitian government, and as many as 700,000 Haitians may have suffered traumatic injuries because of Jan. 12’s earthquake. Tens of thousands are still untreated. Their odds of survival grow if they reach the Comfort.

“We can’t save everyone, but we’re trying to save as many as we can,” Etienne says. “Haiti’s going to be rebuilt. It really is. And some of these people are going to help rebuild it.”

The Navy presence in Haiti is hard to miss. For many of those living in the rubble of Port-au-Prince, the sight of the Comfort is a promise of hope anchored a mile out in the bay.

At about 70,000 tons, it is bigger than the Navy’s biggest battleship, just 100 feet shorter than a typical aircraft carrier. It is painted white and emblazoned on all sides with the Red Cross. Machine gunners stand watch on deck. A small flotilla of frigates and other vessels provides security.

The Navy also has identified a 100-acre plot near Port-au-Prince to establish a hospital for patients with less severe injuries that can be treated on shore, he says.

A native son, back home

Etienne has been on active duty in the Navy just six months. But since he boarded the Comfort, which set out from Baltimore Jan. 15, he has become a confidant and emissary of the commanding officer.

He has helped create a phonetic medical phrase book so doctors can ask their patients simple questions in Creole. He also has been named chairman of the ship’s medical ethics committee.

“When he came aboard he was a neurologist with a special interest in ethics and cultural awareness,” Ware says. “He’s become a trusted adviser and representative for the U.S. Navy.”

A native of Haiti, he left the island just a few days before his sixth birthday in 1981.

The 9/11 terrorist attack on the World Trade Center prompted Etienne to join the Navy. The son of a cabdriver and a nurse’s aide from Spring Valley, N.Y., he enlisted during his fourth year of medical school. Mostly free of debt thanks to scholarships and grants, he decided to give something back. He’s assigned to the National Naval Medical Center in Bethesda, Md.

“I joined the Navy not to serve Haiti but to serve the United States,” he says. “It’s an interesting irony that I can serve both in one mission.”

The flight deck on the Comfort roars from sunup to sundown.

Helicopters lift off with personnel and supplies, returning with quake victims and possibly a family escort, if one survives. Patients arrive at the Comfort from landing zones on the mainland and from the Bataan and the Vinson, which have far more limited medical facilities.

Flight deck crewmembers set patients’ litters on wheels and race them from the helicopters into elevators. Their doors open in the casualty reception center, or “Cas Rec” (kaz rek), the ship’s massive emergency room. The floors are bright red. When the choppers arrive, the patients roll in.

Patients may be sent to the ICU, isolation rooms, pediatric wards or one of the ship’s eight busy operating rooms.

“We’re seeing infections that most people never see in their whole medical career,” says Capt. Richard Sharpe, a surgeon who has served four combat tours in Afghanistan and Iraq. “It’s just amazing to me that some of these people are alive.”

Most of the patients in Cas Rec bays come wearing rags and bloody bandages. Many lie quiet, silenced by illness, pain, exhaustion, grief or incomprehension.

Dozens of children arrive alone, some silent with hollow eyes, others screaming in pain or crying out for their mothers.

“That kid over there was found under a house,” says Cmdr. William Todd, a pediatric orthopedic surgeon, weary after 40 hours of surgery. “Many of them don’t have families. I had a 12-year-old whose whole family was crushed. A little boy was sobbing on his gurney. I asked him what was wrong, and he said, ‘I want to go home. I want to see my family.’

The surgeons aboard are gearing up to work around the clock, because so many patients are turning up with internal injuries, with massive fractures that must be reinforced with braces and pins, and with life-threatening infections.

The doctors so far have performed about 200 operations, more than 20 of them amputations on patients forced to choose between their limbs and their lives, says Cmdr. Timothy Donahue, the ship’s chief surgeon.

“I had to amputate a guy’s foot today,” Donahue said Monday. “He’s a policeman in Port-au-Prince. He’s got four kids. He had gas gangrene. He said, ‘How am I going to support my children?’

“If I don’t (amputate),” Donahue told the patient, “you’ll die today or tomorrow.”

As the ship’s leading ethicist, Etienne is drawn into surgical cases, too.

On Sunday night, a 23-year-old woman decided that rather than have a futile operation, she would die. She had been crushed by a falling pole when she lunged into the street to save a child. She asked doctors if she could die peacefully on the Comfort, with her mother, who lives in Port-au-Prince, by her side. Etienne arranged for her mother’s flight.

Etienne’s role on the hospital’s ethics committee draws him into some of the most complex cases on board, cases that reflect the depth of Haiti’s suffering. There were the young man with cerebral malaria and three patients with tetanus, which Etienne says he has never seen before. None is expected to survive.

The ship’s obstetricians called on Etienne for advice on how to handle a near-term pregnant woman with a broken pelvis and thigh. Her internal bleeding was so severe it threatened to drain the ship’s depleted blood bank — and cost both mother and baby their lives. Delivering her baby and repairing her wounds would require three operations. Etienne found that the consent form mentioned only two.

“Unless you get her consent for the third operation, it will be battery,” he told the doctors. The consent form was revised, the mother survived and the obstetricians delivered the mission’s first baby, a girl named Esther.

Lt. Cmdr. Susan Farrar, who helped deliver the baby, says the mother awoke from surgery worried that Esther might have been hurt by the earthquake.

“The first thing she asked me was, ‘Did the baby have any injuries?’ ” Farrar says. “We told her the baby was perfect.”

In a case that divided the medical staff, Etienne was called in to consult on an 11-month-old boy whose head is so swollen with hydrocephalus — a blockage that prevents spinal fluid from draining — that Etienne had to stick two paper tape measures together to gauge its circumference.

The boy’s case provoked a furious debate among doctors, already stretched to the limits of exhaustion and resources. Should they perform brain surgery to put in a shunt and tubing that would let the fluid drain into his abdomen?

Or should they focus instead on patients injured in the earthquake and not roll the dice on what might be a temporary fix for a fatal condition?

“Personally, I would treat him. We have the shunts. We have the tubing,” says Cmdr. Dennis Rivet, a neurosurgeon, noting that the operation is done with success in poor African countries.

“I would set him free with a blessing,” counters Capt. Arne Anderson, a pediatrician. He notes that many shunts eventually fail.

He also says the Ministry of Health of Haiti had asked the Comfort not to provide medical care that can’t be sustained in Haiti.

“If you like the risks, and the risks are small, I’ll support you,” Anderson says.

The doctors agree to wait for a CT scan to decide. If the boy’s brain shows no damage, surgery might become a reasonable option.

Etienne says the case offers a perfect reflection of the crossroads Haiti has reached. If the earthquake had not happened, he says, “the kid would never have left the house. The family would have hidden him away. Because the earthquake wrecked their house, the family can’t hide him any longer.”

The earthquake likewise exposed the depth of Haiti’s problems, he says.

But there can be hope even in the most difficult circumstances, Etienne says. “I believe in God, and there is always a chance of a miracle,” even in a case as dire as Brianville’s.

Chaplain David Oravec offered a prayer of hope moments after Etienne had delivered his diagnosis. He also asked Brianville, “What do you do?”

“I used to sing,” Brianville said.