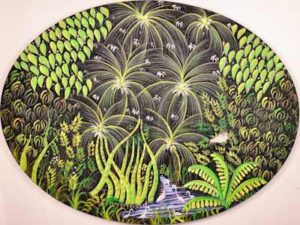 (Reuters) – Nearly 300 Haitians fleeing the poverty of their earthquake-ravaged homeland have been stuck for a month in the Peruvian Amazon, where a gate to what they saw as a better life in Brazil has abruptly closed.

Mostly educated and in their 20s, they have taken refuge in a stuffy church in the Peruvian border town of Inapari since Brazil stationed federal police along the border in early January to stop a wave of illegal immigration.

The 273 Haitians in Inapari sold all their belongings and paid big fees to unscrupulous travel agents to fly to Peru through Panama or Ecuador. They planned to cross overland into Brazil, where a growing economy has attracted some 4,500 desperate Haitians since the quake two years ago – only to find that the border was closed when they arrived.

“We don’t have money and we are so far from Haiti … we just ask Brazil to let us in,” said Joniel Clervil, 22, speaking in English he learned in university before the January 2010 disaster ended his studies.

Having run out of cash, the group is relying on donations of rice and beans from the Brazilian border town of Assis Brasil. It is not clear if they will eventually be able to stay in Brazil or Peru or be deported.

Brazilian President Dilma Rousseff, in an attempt to manage the influx and discourage “coyotes” who take advantage of the immigrants, said during a visit to Haiti on February 1 that her country would award 100 humanitarian visas per month in Port-au-Prince in the next five years while tightening border security.

Brazil also has said it would give humanitarian visas to all Haitians already in Brazil but that future migrants would be turned back at the border unless they had obtained proper visas before leaving Haiti.

Peru’s President Ollanta Humala has tried to help shut down what the governments regard as a human trafficking route by signing a decree last month requiring Haitians to obtain a tourist visa before entering Peru.

The Haitians stuck in Peru left home before the changes took effect and now are in a bureaucratic limbo. The governments say they will hold a meeting next week where they could decide the Haitians’ fate.

Brazil has Latin America’s largest economy and, owing to an economic surge in the past five years and a more assertive foreign policy, it now faces a very First World problem as a place that draws immigrants looking for work. It is increasingly viewed as an alternative to the United States, which has stepped up deportations of undocumented immigrants during the worst economic downturn since World War II.

“Brazil is undergoing this shift. They’ve only recently become an immigration magnet and this may be an impetus to begin a planned migration policy,” said Eleanor Sohnen of the Washington-based Migration Policy Institute.

Rene Salizar, a Peruvian priest, said Brazil’s clampdown was inevitable. He said there has been a constant stream of Haitians at the border since a 7.0-magnitude earthquake killed 300,000 people and left 1.5 million homeless in Haiti two years ago.

“I saw this coming more than a year ago. Groups of between five and 20 were arriving daily,” said Salizar, who has arranged for the Haitians to stay in the town’s church and his house.

Brazil’s ties to the poorest country in the Americas grew after it led a U.N. peacekeeping mission to Haiti in 2004 as part of a broader push to assert itself as global leader.

“Brazil has a commitment to help the Haitian people and their country … this includes those Haitians who want to come work in Brazil – so long as it’s within a limit that can be absorbed by the labor market,” said Carlos Alfredo Lazary Teixeira, Brazil’s ambassador to Peru.

“What we won’t stop doing is combating the coyotes . Many Brazilian citizens were victims of coyotes on the border of Mexico with the United States.”

In the 1980s and 1990s, hundreds of thousands of Brazilians moved abroad to flee economic chaos at home. But in the last decade many Brazilians have started to return home, along with a growing wave of immigrants from other countries.

Stories of ample jobs, especially in construction as Brazil gears up to host the 2014 World Cup and the 2016 Olympics, led the Haitians to fly-by-night travel agencies that promised them passage into Brazil for $3,000.

“My father sold our house in order to send me to Brazil to work. My brother is sleeping in the street,” said Charlemond Angelet, 21, brushing away mosquitoes that swarm Inapari in the Amazon’s rainy season. His cousins are already in Brazil.

Many Haitians said they were hustled out of hundreds of dollars and pressured to pay for “information” about the three-day bus journey to the Brazilian border from Lima.

There is a chance Brazil could allow the Haitians to apply for humanitarian visas at the Brazilian embassy in Lima, but most of the Haitians do not have the two soles ($0.74) hotels in Inapari charge to use the bathroom. None of them have bus fare.

To pass the time, the Haitians hang out with local Peruvians in the lone Internet cafe in Inapari, which has only 1,200 residents, or play soccer with Brazilian teenagers.

“My mother sold everything she had to pay for this trip,” Esther Pierre, 26, said in her native Kreyol. “If I go back now, how am I going to help my family?”

(Additional Reporting By Terry Wade in Lima and Peter Murphy in Brasilia; Editing by Bill Trott)