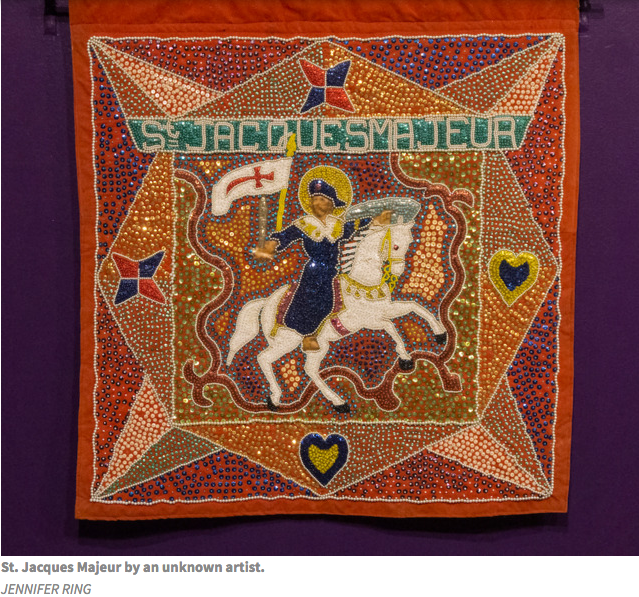 Haitian Vodou flags aren’t like any flags I’ve ever seen. They’re more square-shaped than rectangular, and they’re covered in beads and sequins. We’re talking somewhere in the neighborhood of 18,000-20,000 beads and sequins per flag. They sparkle under the gallery lights.

To appreciate the art of Haitian Vodou flags, all you have to do is look at them. But to truly understand this art form, one must realize that the real Vodou lives outside of the “evil hoodoo” Hollywood trope.

Before Haitian Vodou flags were art, they were sacred objects. Haiti was once the French colony of Saint-Domingue. Africans were brought to Saint-Domingue as slaves in the 1600s and 1700s. These enslaved Africans came from different parts of Africa that spoke different languages and had different belief systems.

“It was like Africa was recreated on a very tiny island,” says Haitian-born American artist Edouard Duval-Carrié. Vodou united these different groups under a common belief system. Like Christians, Vodou practitioners believe in a Supreme Creator, or God. In Haitian Vodou, this God is unreachable, so you have to reach it through intermediary spirits called Loa.

To summon the Loa, you need a Vodou flag. Different flags invite different spirits to the party. According to scholars of Haitian art, there are thousands of these Loa, but only about 16 of them get their own flag. The earliest Vodou flags, made by Haitian Vodou priests, contain either an image of a spirit or a symbol for that spirit.

There’s a whole wall of these vintage Haitian Vodou flags at the Tampa Museum of Art tight now — I counted 19 altogether. All of them were made through the ‘40s-’80s, and they’re all 40 inches square. Each of these vintage flags has a different symbol on it, meant to call a different spirit. The flag with the boat and red fish on it was likely meant to summon Agwe, the Vodou king of the ocean. A pink flag with a gold heart hangs for Erzulie Freda, the Vodou spirit of love. Flags with white or green snakes on them are an invitation to Danbala Wèdo, the Vodou spirit of happiness and wealth.

Another wall of flags is devoted entirely to the Catholic Saint, Jacques Majeur, a common Catholic stand-in for Ogou, the Vodou warrior spirit. Due to his association with the Haitian struggle for independence, Ogou is the most beloved Loa in Haiti. He is seen riding horseback, carrying sword and banners, galloping across 18 Vodou flags in red, white and blue.

Another section of the exhibition focuses on Vodou flags as art. This section displays work from nine Haitian artists who, according to Duval-Carrié, elevated Haitian Vodou flags as an art form. These nine artists represent three generations of Vodou flag making.

“It’s a style that’s an evolution,” says Duval-Carrié. Vodou flags have changed over time, as they progressed from being ritual objects used in Vodou ceremonies to becoming collected works of art. This generation’s Vodou flags are not your granddaddy’s Vodou flags. The sizes and shapes often depart from the 40-inch, square standard, the designs have become more elaborate, and the colors have gotten brighter.

Lherison Debreus’ work stands out for its three dimensional quality. In “Excite Lakwa” (2014), a grey cross and a black man protrude from a rectangular board. The man holds a bottle in one hand and a vessel in the other. A black cane hangs from his right arm. Is this Papa Legba, Vodou guardian of the crossroads?

Each of the spirits depicted on these flags grants a specific type of wish or prayer. When a Vodou spirit arrives on the scene, it possesses the Vodou priest. Then you make your request. According to a 2004 article in National Geographic, most people ask for health..

In 1791, when the Haitian people gathered at Bois Caïman, they asked for freedom from white rule. Then they planned for it. Many consider this Vodou ceremony/political meeting as the beginning of the Haitian Revolution.

Haitian Vodou flags don’t just tell the story of a religion. They tell a story of oppression, revolution, and independence. This uniquely-Haitian art form tells the story of Haiti itself. See it at the Tampa Museum of Art this fall.